I’ve read quite a few accounts of WWII submarine warfare and all the shipping that was destroyed (fuel tankers as well as fully fueled ships). What I never hear about are the after effects of oil spills and such from those sinkings.

I imagine that the Gulf disaster is an order of magnitude much greater than any WWII spill, due to its quantity and it being a localized event vs many WWII occurrences spread over thousands of locations.

Yet I’m curious, are there issues still arising from WWII oil spills?

Did the method of destruction (explosion) cause a significant burn-off of oil?

I also imagine that a lot of shipping went down far at sea, and was thus diluted far from shore. But weren’t there a lot of sinkings done in port, or close to?

I read recently (on here, I think) that the Exxon Valdez spill is still not completely cleaned up. Surely there were spills of that magnitude during WWII, yet I’ve never heard of the lasting effects. I’m curious if different habitats developed in those areas over the past 60+ years.

Do we have any examples of habitat renewal from past (old) oil spills that can give some small hope that the Gulf will return to some sort of normalcy? I imagine that given the quantity, any effects in the Gulf will be felt for many generations. I’d like to somehow get a historical perspective of what to expect.

There was nothing the size of the Exxon tanker wise in WW2 I think, it was 110k tons, even the heaviest battleships were 70k or so at most.

But there are WW2 wrecks where oil leakage is still an issue even now, eg Scapa Flow and Pearl Harbour.

IT IS ONE of the Royal Navy's most sacred war graves. Torpedoed by a U-boat in 1939 with the loss of 833 lives, the battleship HMS Royal Oak lies beneath 90ft of water at the bottom of Scapa Flow in Orkney. 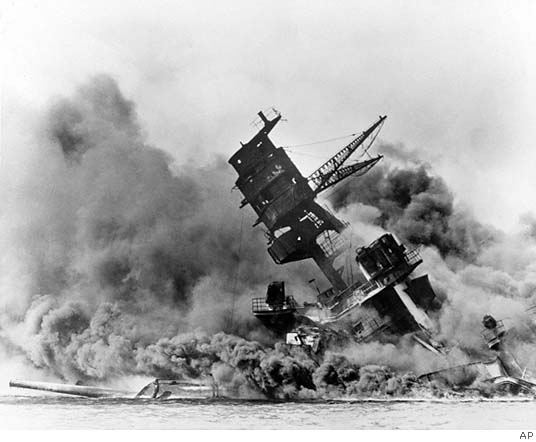 Pearl Harbor oil leak is precious to some, but a worry to others

The 1.6 million visitors a year to the Arizona Memorial are told by their guides about the...

So the effects can be very long term, but thats more where its been trapped rather than the effects of oil already released. I dont know about the immediate/long term effects from oil released at the time of sinking.

On the east coast there were cases of oil, bodies, and other stuff washing ashore, but the quanity was smaller and more local.

A WWII tanker was much smaller. The T2 tanker was around 10,000 tons, that is about 141,000 barrels or 5.9 million gallons. The Exxon Valdez was a Supertanker in excess of 100,000 tons. And how many gallons are spilling every day now?

The tankers would have been mostly processed oil or oil products, and would have either burned or gassed off.

I’ve been working on a history of oil spills, in the U.S. and elsewhere. Here’s what I’ve learned about the oil from ships sunk off the Atlantic coast of the U.S. and Canada during WWII: in the first eight months of 1942, 285 ships were sunk in U.S. and Canadian waters. The prime directive of the German High Command was to disrupt the transport of munitions and petroleum to U.S. ports. In the first six months of 1942, an estimated 145 million gallons of oil spilled within 50 miles of the coast. That works out to be an average of 800,000 gallons per day, every day, for those six months. As a comparison, the Exxon Valdez spilled around 11 million gallons, and the BP/Deepwater Horizon spill clocked in at 206 million gallons. There’s not much documentation of shoreline impacts, although Life magazine published photos taken by Marie Hansen showing oil on the beaches of North Carolina and cleanup using bulldozers.

Holy hell, I’ve never seen the two data points put right next to each other like that. :eek: Thanks for the stats.

I’ve heard that crude oil causes more environmental problems than refined products. The tankers on their way to Britain were not carrying crude oil.