I was tidying my house recently , when I came across the 1st Edition AD+D adventure ‘The Village of Hommlett’.
Gosh - that brought back memories.

I started playing AD+D in 1979 with some friends from work, and soon added a couple of chess playing mates. (And 41 years later, I still play with a few of them.

)
‘The Village of Hommlett’ was the first published module I ran as a DM.

Since then I’ve used it to introduce various beginner groups to the game - it has stood the test of time.

I bought the computer game ‘The Temple of Elemental Evil’ in 2003 and played that all the way through.
The opening scene in the game is a view of the village of Hommlett - just as I pictured it.

I look forward to hearing your similar memories!

I still have it, along with dozens of other 1st Ed modules. Against the Giants will always be my favorite early modules.

I started playing when you did, 1979, but was still in school. The first module I remember playing was The Steading of the Hill Giant Chief, and the first I ran was Sinister Secret of Saltmarsh. Still play. The only version of D&D I didn’t play was 4th.

I literally cannot tell you how many times the Village of Hommlett and the Moathouse have turned up in my campaigns, D&D and otherwise. I still think it’s one of the best intro adventures in any edition of D&D, and I’ve lifted bits of it for a lot of games. The same with Keep on the Borderlands.

Castle Ravenloft has wound up in almost as many games, and far beyond D&D. The same with Isle of Dread.

I have many fond favorites of those days, the one I remember most is “The Isle of Dread” which, well, wasn’t the best from a writing/story point, but it was my first time playing outside of a more traditional ‘Dungeon.’ Doing things in the wilderness, worrying about dealing with natives who couldn’t be discounted as monsters, all of that was so fresh at the time.

About 10 years ago or so, we had a lark where our third edition characters (around level 12 if I recall) stumbled on the Isle (we just used the old module and used stats from the newer edition DMG), and being a bit over leveled commented “I’m not finding much to Dread here.” It was fun to revisit. Which we then went and did with @Levolor_the_Blind 's favorite, the giant series. Which I may have . . . broken . . . due to being such a powergaming piece of bleep. Third edition had some interesting exploits if you were creative and your DM wasn’t willing to say “Okay PL, yes, the rules say you can do that, I give you credit, but the answer is NO!”

ETA - Aaaand @gdave sneaks in an IoD reference while I was typing this!

I started playing in early '82, at the end of my junior year of high school. I had some birthday money, and went to the hobby store to buy a model rocket kit (model rocketry is among my other nerdy hobbies). They didn’t have any kits that I wanted, but as I turned away from the rocketry display, I saw a D&D boxed set on an end-cap display, and decided to buy that, instead.

I played a few games with my next-door neighbor, and decided to buy the AD&D books a few weeks later. Just after school let out for the summer, I was invited to play with a group, through a friend, and I was surprised to discover that that group was mostly people in their 20s and early 30s. I had a blast playing with them (they were playing the classic module “White Plume Mountain”), and they invited me to come back the next week. 39 years later, I still play sometimes with three of the people whom I’d first met and played with on that day.

A year later, I went off to college, and one of the first things I did was put up a sign on the bulletin board at my dorm, looking for D&D players. Within a week, I had a group of six players, and we played together constantly throughout college. I’m still close friends with most of them, too.

Like @What_Exit, I have a lot of 1E dungeons, and still have all of my books, too. My very favorite 1E module was the aforementioned White Plume Mountain, and I’ve run it again several times over the past 20 years, adapted for 3E D&D, 4E D&D, and 13th Age (a game system written by one of the 3E designers, and one of the 4E designers).

Thanks for those recollections!

From what I remember (at least 30 years ago

I still have all my 1E & 2E books. The early (pre-orange spine) 1E books are bound by grey tape. I missed 3 & 4E, but started playing 5E with a group of neighborhood dads about four years ago.

My dads group e restarted in-person play last night, since we are all fully vaccinated now.

I have the original small format D&D books, I keep thinking I should sell them as I’m never going to use them again. The books are in excellent shape, the box is long gone.

My 1st Ed are all used and abused.

First module I ever played was Slave Pits of the Undercity which the older kid across the street ran for me and his younger brother. I remember coming across some flamethrower wagon and doing something weird with it (don’t recall exactly what) and we were allowed to do it. Which really sort of blew my mind that “anything” was possible in the game. I don’t remember the details of the module too well but I remember that moment and feeling.

Still own all my 1st Edition books and reference them now and then for ideas. Skipped the 3rd/th edition generations and went from 1e/2e right into 5e when I decided to start playing again.

Still playing now in 5e (plus recently joined an online Starfinder game). Hoping this year the local comic store is able to start allowing in-store play again both to get back to my old regular group at the table and to get back into running games, even if only Adventurer’s League one-shots.

‘Castle Ravenloft’ was a Vampire lair

Indeed, it was, and then some. It was a revolutionary module for D&D, as it wasn’t just a traditional dungeon crawl:

It was also an infamous character-killer dungeon. We played it shortly after it came out, with a pretty large group (10 or so players), and all of the characters died. A few months later, my girlfriend (who was one of the players in that group) and I were at GenCon, and we stopped by the TSR booth in the exhibit hall. There was a guy sitting behind a table, and his name tag read, “Tracy Hickman” (he and his wife Laura wrote “Ravenloft”). We stared at him, and then said, "You!!’ He laughed, and replied, “Let me guess, your characters died in Ravenloft?”

I remember as a kid, one of my favourite books to pore through was the 1E DMG. Lists of gemstones, mental illnesses, rules for converting to Boot Hill and Gamma World, potion miscibility, and the notorious table of prostitutes – what better education for an 8 year old child?

the notorious table of prostitutes

Well, yes, but this was AD&D, so it was a table of historical prostitute titles (I’m pretty sure this is where I first learned of “harlot” and “strumpet”).

Along with “doxy” and “trull”, if I remember correctly.

You might find that even 1st Edition D+D manuals are worth something on Amazon (in good condition.), e.g.

Worth even more if they’re on loose-leaf paper! Sadly, your old 1e Unearthed Arcana that fell apart doesn’t qualify as “loose-leaf” 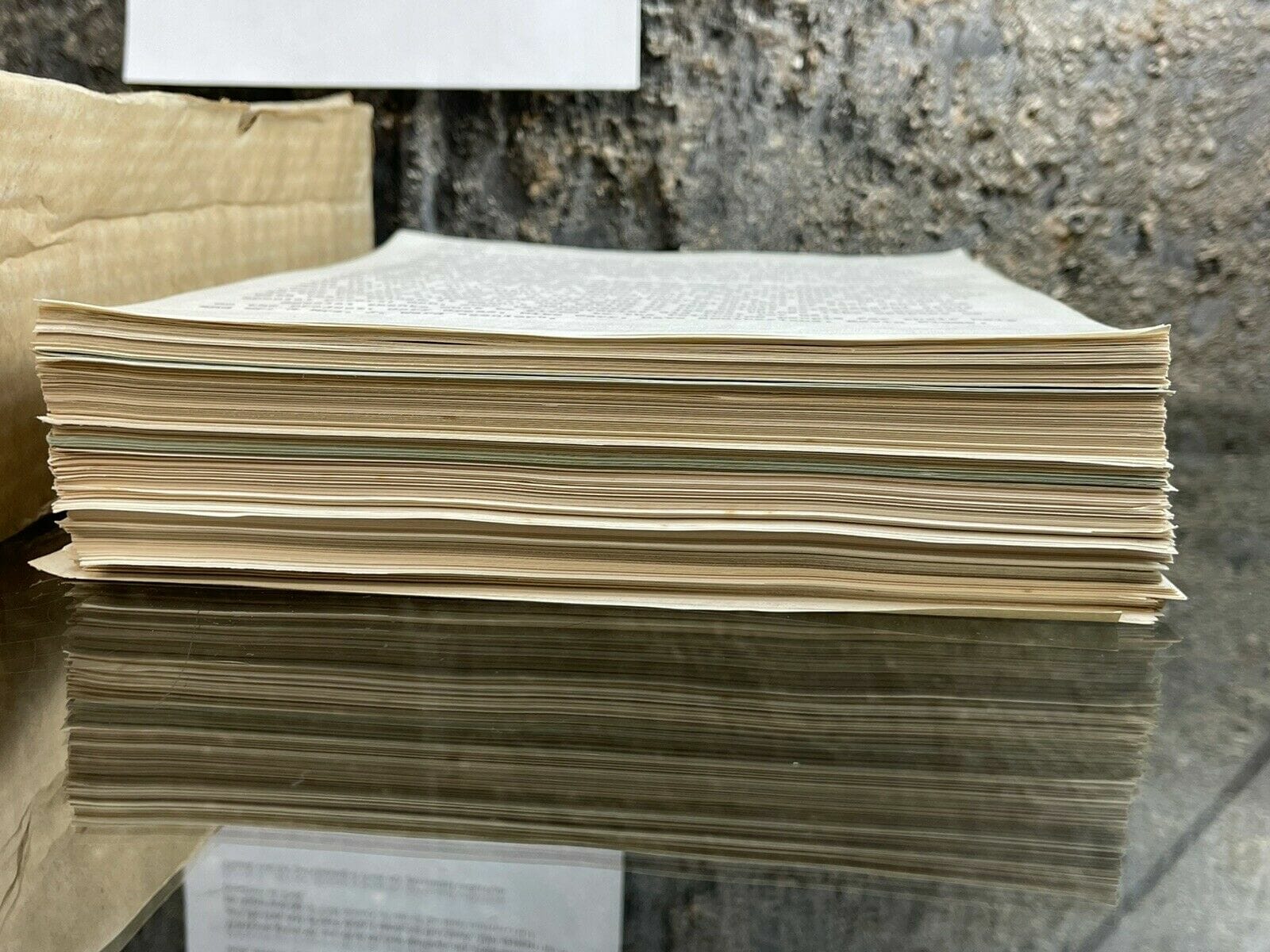 Printed in 1980, the unbound and hand-typed document was written by James M. Ward, a designer for TSR.

You might find that even 1st Edition D+D manuals are worth something on Amazon (in good condition.), e.g.

Listed as offers for purchase? Or as offers for sale? Since Amazon, I assume the latter. In which case, those “prices” are virtually worthless. Out of print RPG books are very niche items, and Amazon’s pricing algorithms frequently get whacky with such items. You can find all sorts of ridiculous prices for old RPG books that no one would ever actually pay.

Although, depending on the condition, those prices actually seem reasonable for those items.

the notorious table of prostitutes

Well, yes, but this was AD&D, so it was a table of historical prostitute titles (I’m pretty sure this is where I first learned of “harlot” and “strumpet”).

I am loath to visit this sordid topic, but the sub-table in question is actually in the random encounters appendix, not a glossary. The notes to the DM seem to suggest that players finding themselves in that part of town may find it difficult to distinguish a gentlewoman from an “expensive doxy”, etc. There is one more similarly formatted table to distinguish what kind of tipsy revelers are encountered: 23–25 for a city watchman, 49–63 a labourer, and so on.

I am loath to visit this sordid topic, but the sub-table in question is actually in the random encounters appendix, not a glossary.

Mostly, I remember the awesome picture of “Emirikol the Chaotic,” by Dave Trampier, which was on the page facing that table. 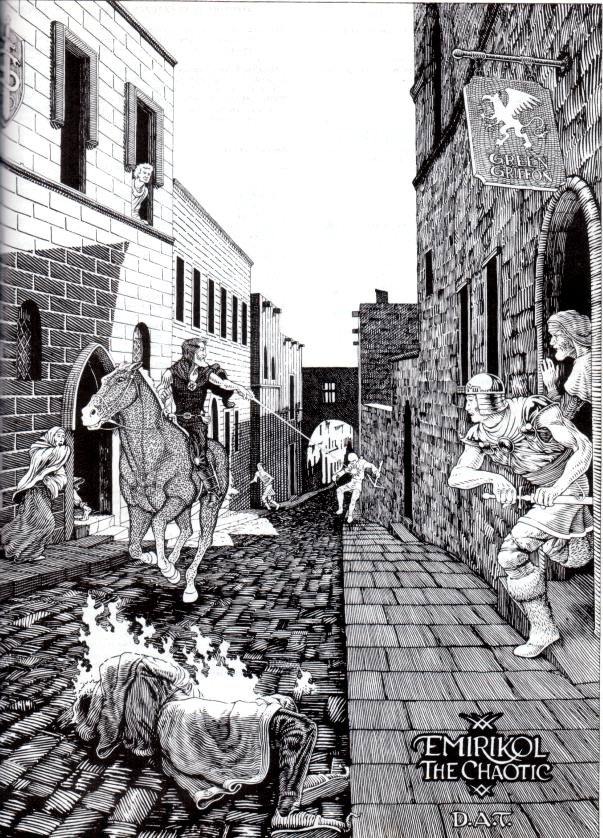 I am loath to visit this sordid topic, but the sub-table in question is actually in the random encounters appendix, not a glossary. The notes to the DM seem to suggest that players finding themselves in that part of town may find it difficult to distinguish a gentlewoman from an “expensive doxy”, etc. There is one more similarly formatted table to distinguish what kind of tipsy revelers are encountered: 23–25 for a city watchman, 49–63 a labourer, and so on.

Huh. I remembered it as being akin to the Royal and Noble Titles on page 89, but I just checked, and you’re right, it’s in the CITY/TOWN ENCOUNTERS MATRIX, on page 191, “40-41 (Daytime Dice Roll)/44-50 (Nighttime Dice Roll): Harlot”. In the explanation for that entry is the table I remember, which further specifies “which sort of harlot encounter takes place.” Which…yeah, AD&D had some really weirdly salacious bits just kind of randomly scattered in dry collections of tables and statistics.

Mostly, I remember the awesome picture of “Emirikol the Chaotic,” by Dave Trampier, which was on the page facing that table.

That is one of the truly great pieces of D&D art in the history of not just the game but the entire tabletop RPG genre. And it’s just kind of randomly there - I guess it’s illustrating a possible City/Town Encounter, although I checked, and there’s no entry for “Chaotic Wizard Randomly Murdering Passersby and Bystanders As He Gallops Through The Streets.” But there should be.