Have any of you wonderful people taken a bus tour from LV to Grand Canyon?

My Drum Godess and I are going to visit Las Vegas starting on July 10. Neither of us has never been. We plan on taking in some of the shows, pulling the arms of a few slot machines, visiting Freemont Street (I really want to do that zipline I’ve seen on YouTube).

We are going to take a day and do one of those bus tours out to Grand Canyon. I’m using the website TicketsAtWork to purchase this. There are several different options, mostly around the same price. I want to include a stop at Hoover Dam to walk around and take pictures, but neither of us is interested in the tours. I’d like to go across the dam and take pictures from the bridge above the gorge. I am totally unclear about where to go at Grand Canyon. There seem to be North Rim, South Rim, and West Rim options. I am leaning toward going to the National Park, but I am undecided about missing SkyWalk. Is SkyWalk just a gimmicky thing, or is it something that is really special. I won’t have a problem with walking on it, but I don’t think my wife will like that at all.

So, what is the best way to spend a day seeing Hoover Dam and the Grand Canyon? Should I even dump the idea of a bus tour and simply rent a car and go out there ourselves? (I’m not opposed to driving, but seems like leaving the driving to someone else would be fun, too.)

I have not, but honestly it looks horrible. South and North rims are official national parks, but you’re going to be sitting on a bus for at least eight hours. They’re a great experience once you’re there but I would recommend setting aside at least two or three full days to experience them. The West rim is not official park and looks suspiciously like a tourist trap.

You may be more comfortable with sitting on a bus than I am. Personally I’d just go to Hoover dam. I know you said you didn’t want to do the tour, but I’m going to recommend it anyway, especially the extended version where you actually go into the dam wall.

The canyon is worth visiting. But I personally think anything but the North or South rim for at least a number of days is a waste, and the sitting in a bus overhead will easily outweigh any enjoyment you gain if you try to do it in just one day. In short, my advice is do it properly in another trip

IMHO, obviously. The long bus tour may be more your cup of tea than mine.

I can’t imagine visiting the Grand Canyon for that short a time. I was there for five days (two on the North Rim, three on the South), and I wish I’d been there longer. I did so much, like the mule ride down to the bottom, overhead flight, river rafting, several hikes . . . but there were still so many things I didn’t have time for. Take the time and do it right.

One of the coolest things was a huge forest fire near the North Rim, prior to my arrival, blocking the only road in. The Rim was evacuated, and only reopened on the day I arrived. Driving down that road, I witnessed the desolation of the burn area, and parts of the forest were still smoldering. This was ten years ago, and I’d love to see how much new growth is in that area.

That’s the sort of thing you’d miss on your bus tour.

My significant other does those tours for a living right now- and if you really want to see the Grand Canyon- the West Rim is the best bet to just see it but it is very touristy. The South or North Rim is well worth renting a car and spending a night or two at least. Also, the West Rim is less of a chance to be held up in a flash flood this time of year.

I’ve grown up in Boulder City, which is 6 miles from the dam, so I don’t really get the attraction and if you were going to do one or the other- the Grand Canyon is the thing to see but a West Rim tour can easily take care of both.

I would suggest you make them two separate trips.

Rent a car and do the dam in two or three hours, including the tour into the dam. Be aware that you can’t carry a camera bag, purse or backpack into the dam if you do decide to take the tour; leave them in the car. I like the dam tour.

Grand Canyon is a long day trip. No reason not to drive yourself if you enjoy long drives, but being able to snooze on the bus after a late night on the town is certainly a reasonable way to go.

I don’t mind touristy too much and we’re not really the camping types. Our goal is really just to see the majestic wonder of the place and say “wow”. If it captures us so much, we sure could make a separate trip out there and stay a few days.

Anyone have thoughts on SkyWalk? Is it worth it?

In August 2012 we took a bus tour to the west rim and thought it was well worth the cost. I chose a company named Sweetours because in researching all the tours theirs had the best ratings and least trouble with buses (e.g. air conditioning) - they seemed to have newer buses than the others at the time.

We were picked up by a small bus at our hotel (The Mirage) at 6:20 a.m. We were then driven to a parking lot were all the tour buses were parked. There we transferred over. We drove over the new bridge at Hoover Dam and stopped there for picture taking. We also stopped at a convenience store about halfway to the canyon so you could get out, walk around, buy snacks etc.

The last 20? miles or so was dirt road. I wouldn’t want to drive it in my own car. At the canyon, the views were spectacular. I found it literally breathtaking to stand at the edge and look into the canyon.

The Skywalk at that time was $35 per person with about a 2 hour wait. I was not comfortable with the idea once I got there and saw it in person. You are not allowed to take a camera onto the walk but they’ll gladly sell you pictures their photographers take of you and your group on the walk.

Our tour went to a western-themed town nearby the rim were they served us barbecue (included in the price of the bus tour). There were also helicopter rides available at the rim but we didn’t do that.

The day we went the temperature was 117F in Las Vegas. We did some walking around the canyon viewing areas and then sat in a shaded area where you can buy food and cold drinks. It was pretty crowded.

We got back to our hotel about 5:30 p.m. where we were dropped off from the tour bus - no transfer back to the small bus.

We were happy with our tour experience but in any case, see the canyon. It is amazing. I’d recommend a separate tour for the dam. We drove out there in the rental car and did the tour.

FLY over the Grand Canyon!

Not too expensive, many different tourist services offer these excursions from Las Vegas, and many trips offered each day. Like this… 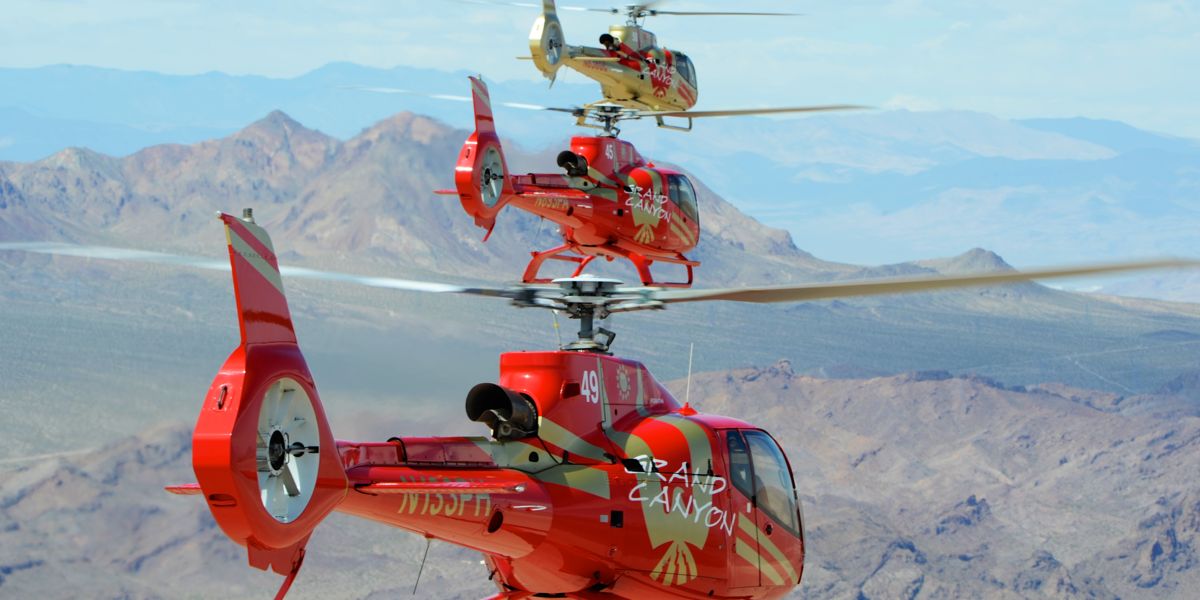 The Highlights Over Grand Canyon Air Tour takes guests on a 70-minute airplane tour from Las Vegas, displaying the unique beauty and contours of the Grand Canyon West.

In 2014 I took the same West Rim trip (with the same company) that MostlyCarbon mentions. My experience was much the same, except that the road that leads to the site is fully paved now, and there was no wait to get onto the skywalk. Also, we were an hour late getting back to the hotel because of one family that decided to ignore the “be back on the bus by 1:30 sharp” instruction and held everything up while the tour guide and some of the site staff searched the grounds to find them. As I recall, it was about $130 for the tour, which included a light breakfast on the bus, BBQ lunch at the western village, and all the bottled water you can drink.

I enjoyed it - the view is amazing, and there’s an abandoned tramway on the site that was used to haul guano out of the canyon in the '50s that’s pretty interesting to see.

FLY over the Grand Canyon!

Not too expensive, many different tourist services offer these excursions from Las Vegas, and many trips offered each day. Like this…
Highlights Over Grand Canyon | Papillon Grand Canyon Tours

The tour I was on left the South Rum early in the morning, flew over the Canyon, then along the river up to Page, followed by a tour of Antelope Canyon and the Glen Canyon Dam. We then boarded rafts for river rafting down the Colorado, including a picnic lunch and the chance to swim in the very cold river. Then we returned to the South Rim that evening. This was a full-day affair, and was equal in excitement to the mule ride down to the bottom. Highly recommended.

I went as far as the street corner newspaper box to find out about tourist attractions, but when I opened the newspaper, I was struck blind.

Thank you for the recommendations. We decided to take the bus tour offered by SweeTours. Your comments plus the reviews on TripAdvisor made it a very strong choice. I booked it through Expedia, which was about thirty dollars cheaper per person. We went to the South Rim for the day.

The tour was led by Walter, and we had a great time. We had four hours to walk along the Rim trail. The weather was fantastic and the views spectacular. I know there are lots of other activities at the canyon, but we enjoyed getting to see it and walk along it.

The bus ride was a tad looooooooooooong, though. Everyone was very pleasant, but we were glad to get back at the end of it. Don’t book this trip on a night you have show tickets. You won’t make it back on time.