I see ads for dental implants constantly on this board. Full plates of teeth screwed into the jaw.

I got a implant several years ago and been very pleased. Works just like my original tooth.

I assume years ago they would have used bridge work to replace that tooth? 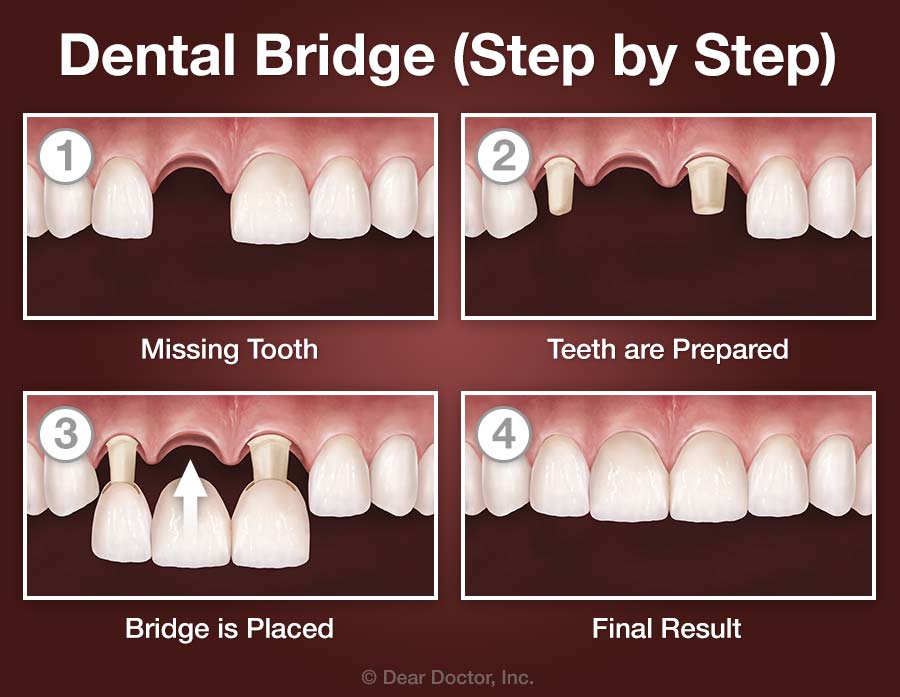 My dad had a front tooth pulled a few years ago, when he was 82, and decided to get a bridge instead of an implant when he found out that an implant would cost at least $2,000.

Implants may require more time in the chair and more “discomfort” than bridges and caps would.

Pricey. Until the going rate gets reduced it won’t replace a bridge or dentures. Mr.Wrekker has 2 implants and it was $6000. about 7 years ago. Since it was a work accident he didn’t have to even use his insurance or he would’ve gotten a bridge.

My mom (who is now 80) is from Brazil, and gets her implant work done down there when she goes back to visit, the cost is much less than it would be in the US…many people go to Mexico to get them done.

I’d imagine there’s plenty of cases where there isn’t enough bone structure left or for some other reason (a nerve right there) that prevents the dentist from anchoring the post into the jaw. In those cases it seems like using one or two good teeth would be the better alternative. It involves more teeth, but would be less likely to fail.

I had some concerns getting my implant. The dentist’s xray of a nerve in my lower jaw was inconclusive.

He sent me to an oral surgeon for a more detailed xray.

That confirmed it was safe to drill and seat the post in my jaw. The nerve wouldn’t be effected.

The dentist told me that hitting that nerve would be very bad. I’m glad he was cautious.

I’d imagine there’s plenty of cases where there isn’t enough bone structure left or for some other reason (a nerve right there) that prevents the dentist from anchoring the post into the jaw. In those cases it seems like using one or two good teeth would be the better alternative. It involves more teeth, but would be less likely to fail.

A lot of things can be done to build up bone for implants. But it does increase the cost and time in the chair and pain and chance of complication. My oral surgeon, recently retired unfortunately, wouldn’t do any risky procedures. He wanted to see new techniques hold up for years before he’d use them on someone.

I have one implant. Cost about $6000 and took over nine months.

Involved extraction of a large molar, a bone graft using chips of bovine & human bone chips. Several months later, drilling of a hole and screwing in a titanium socket. A few more months of healing then a stud screwed into the socket. Lastly, a trip back to my regular dentist for a crown on the stud.

None of it painful, just tedious.

I have an implant and a permanent bridge. I’d have 2 implants except that I had different insurance and it would not pay anything on an implant. So I got a bridge. They paid 100% for the bridge. Go figure.

The implant is easier to clean with floss and such. No threading or special little strips.

I am going through this now.

I have a permanent bridge that I’ve been happy with. I recently had another tooth extracted, and found out that my insurance would pay half the cost of an implant, which makes the cost roughly comparable to a bridge.
I decided to go with an implant.

What I didn’t get about going for an implant is how long it takes from start to finish. Months.
A bridge is way faster than an implant.

What I didn’t get about going for an implant is how long it takes from start to finish. Months.
A bridge is way faster than an implant.

I don’t have implants (nor dentures), but my father-in-law got implants a few years ago, and that’s my recollection, as well.

There’s a dental implant company (ClearChoice) which has done a lot of TV advertising over the past couple of years. One of their claims is “New Teeth In Just One Day.” I really wonder how they pull that off, and it makes me think that the claim is probably a bit on the deceptive side.

There’s a dental implant company (ClearChoice) which has done a lot of TV advertising over the past couple of years. One of their claims is “New Teeth In Just One Day.” I really wonder how they pull that off, and it makes me think that the claim is probably a bit on the deceptive side.

They’ll glue in a temporary denture on day one. It still takes months before the implants are completed, and then more time before prosthetic teeth are attached to the implants.

Replaced? No. Provided another option? Yes.

An implant is generally more expensive and takes more end-to-end time to complete, significantly more of each if bone grafting is required. OTOH an implant is more permanent. I went with a bridge because my main goal was to get back to full functionality for that tooth as quickly as possible.

That was why I opted for an implant vs a bridge the first time I lost a tooth (and the second) - but I’m certain there are cases where a bridge is the better option. Not all patients are candidates for an implant one way or the other, implants do sometimes fail to “take”, bridges are less expensive, and a bridge can be done in one or two visits in a short period of time, while an implant has a minimum of 3-4 months between the beginning and end of the process.

Adding to the time of doing an implant: If the in-jaw portion cannot be done at the same time as the extraction, you have to wait a few months for the bone to heal enough to accept the implant. With my first, I didn’t even decide which approach to do until a year or more after the tooth was yanked; the advantage there was I did not require any kind of bone graft as I had plenty of my own. With the second, I planned on an implant right off the bat before the extraction, so the discussion with the oral surgeon was something like this:
“Can you place the implant at the same time you yank it?”
“Maybe… won’t know for sure until I get in there; if I do, you’ll need some bone grafting”
“OK - you use your judgment and tell me what you did when I come out of the sedation”

I was lucky; he WAS able to do both at the same time, though as I recall it meant there were a lot more of those annoying-as-hell dissolvable stitches in my gum. And, the post of the implant stuck above the gumline (with the first one, it was all covered; he then had to uncover it before the crown was made).

As a hint for anyone considering an implant: Once that part is done, your regular dentist makes a crown - which is as expensive as having an existing tooth crowned. If your dental insurance has a maximum yearly benefit, time things so that the implant is done in one year and the crown in another.

I just had this conversation with a dentist today. My takeaway is this:

If money is no object, an implant is the way to go. It is more permanent, does not require the damaging of adjacent teeth, and functions just like a natural tooth in terms of dental hygiene. As mentioned above, it does take time. I was told that once the screw is installed, the jaw must heal for approximately 4 months so that the bone can properly fuse with the screw. After this time, the implant itself can be installed.

A bridge is the mid priced option. It requires the adjacent teeth to be pared down to provide anchoring locations for the bridge. It does have some drawbacks - principally the possibility of losing the anchor teeth as well if the bridge should fail. It is also problematic in terms of dental hygiene, as flossing becomes very difficult, due to the lack of a gap between the teeth of the bridge. The dentist I spoke with does not like to intentionally damage an otherwise healthy tooth to use as an anchor.

For the budget minded folks among us, dentures remain the cheapest option.

I have three implants. Two are next to each other in the upper right – I needed a sinus lift for this (the oral surgeon drilled through the bone over the teeth and packed the area with a combo of cadaver bone and my own blood cells [which raised the sinus]). There was some pain with this and the implant of the posts, but I opted to have all done with Novocain instead of being knocked out.

Before electing the implants, I did some research. There is evidence that in the long run having an implant may be cheaper than a bridge. Assuming the patient cares for the implants as directed, they will last a lot longer than the bridge. The bridge typically puts enough strain on the teeth it’s anchored to that eventually one or both will fail. If both fail, the only option is a partial denture – bridges can’t span over that many teeth.

I just saw a commercial for one of those quickie dentists. He specifically noted that he handles all types of replacements, “bridgework,dentures, and implants.”

I had the left 1st & 2nd lower molars pulled. I waited three years to get my implant. Cost was a big factor.

By then my cheek had sunk in and I had learned to chew on the opposite side of my mouth.

I got a 1st molar implant. They said that helps with chewing. Didn’t recommend replacing the 2nd molar. The upper tooth above it has a huge filling and isn’t very strong.

It took over a week to adjust to the implant. I bit my cheek several times. Chewing felt weird.