Have there ever been any true matriarchal societies?

I am talking about societies where women actually ruled, and not just allowed by men to hold certain high positions.

It really depends on how you define it. A society where only women held power? Then probably not. But, matrilineal societies (where wealth and power is passed down through the mother’s family) and ones where women held most of the power (or, at least, equal with men) abound.
There are even clans today where women wield most, if not all of the power.

These Matriarchal Societies Are Entirely Governed by Women

And they can be found across the globe.

ones where women held most of the power (or, at least, equal with men) abound.

The “(or, at least, equal with men)” qualifier pretty much eliminates those societies in my opinion.

Well, then your answer is a definite “no”.

Let’s look at those six societies that are “totally governed by women”.

Yes, the headline of that article is sensational. And clearly they are defining “matriarchal” as power and wealth being passed down through the mother’s lineage (matrilineal). But, men are clearly not excluded from holding power (Umoja excepted).
But you are also defining power in a restricted sense: the government. It can be said that, no matter who actually sits in the government, those who control the wealth and the means of acquiring it are the ones in actual power.
It all goes back to how you define a matriarchal society. By a strict definition of power as wielded through govt and solely through women; then there has never been one.

It all goes back to how you define a matriarchal society.

My OP tells you what I am looking for specifically in this case. 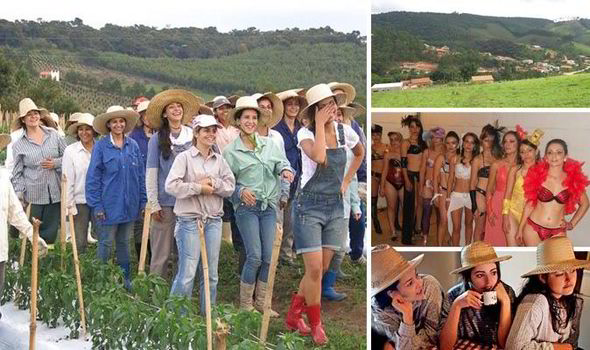 Girl power! Town populated only by women say men are allowed - if they abide...

A TOWN populated solely by women has appealed for bachelors to join them - provided that they are prepared to live by female rules.

and not just allowed by men to hold certain high positions.

There are plenty of societies where women held positions of power not just because they were allowed to by men. But, that does not make them matriarchal.
And what do you mean by positions of power? Is it just govt? Does the domestic side of society have no power in your estimation?
You may think your op lays out a clear path but it’s a question that has been debated by sociologists and archeologists for decades now.
As I said in the second post. Following a strict definition of a matriarchal society, your answer is “no”. But there’s plenty of room for nuance in a discussion such as this

By “ruled” I mean politically.

Fair enough. And I think you’ll find that you’re in the majority with that definition.
But, you should be aware that there is a large and increasing body of women’s studies that defines matriarchy (and power, for that matter) differently.

The subject of matriarchal studies is the investigation and presentation of non-patriarchal societies of past and present. Even today there are enclaves of societies with matriarchal patterns in Asia, Africa, America and Oceania. None of these is a mere reversal of patriarchy where women rule -as it is often commonly believed -instead, they are all egalitarian societies, without exception. This means they do not know hierarchies, classes and the domination of one gender by the other. They are societies free of domination, but they still have their regulations. And this is the fact that makes them so attractive in any search for a new philosophy, to create a just society.
…
matriarchies are not a mirror form of patriarchies but rather … a matriarchy "emphasizes maternal meanings where 'maternal symbols are linked to social practices influencing the lives of both sexes and where women play a central role in these practices

Yeah, I got the point already…but it still isn’t what I am looking for.

It can get complicated.

Among the Haudenosaunee (Iroquois), men are the chiefs. But women select the chiefs, and can remove them. So who’s in charge?

Politically, that would put the women more in charge, if even only indirectly. Closer than the other examples so far.

Each of the six nations of Haudenosaunee is comprised of extended family groups called CLANS. A CLAN MOTHER heads each clan. In the past, a clan mother was usually the oldest woman of the clan. Today, clan mothers are chosen for their cultural wisdom and dedication to the Haudenosaunee people. […]

Clans are extended families. Haudenosaunee clans are MATRILINEAL. This means they follow the line of descent of the mother. Children belong to their mother’s clan. […]

The clan mother has an important role. Some of her responsibilities are to:
■ Make all the major decisions that affect the clan.
■ Assign names to people in her clan.
■ Nominate the male leader of the clan. The male leader is called the HOYANEH.
■ Help ensure that all members of her clan are fed.

AIUI, there would still be lots of aspects of society that men were in charge of, such as hunting and warfare. But effective power in terms of practical influence and authority does seem to have belonged primarily to women.

Yeah, I got the point already…but it still isn’t what I am looking for.

I think part of the problem is that you are looking for a definition of power that is rooted in a patriarchal definition of what constitutes power.

Power emanating from a masculine view of strength where a leader is one who has vanquished others. You are not going to find a society where women dominate the power hierarchy through muscle power or military prowess. Expecting women to run a society as a mirror image of how men do, is pretty much setting the question up to fail. In the limit a testosterone fuelled ego trip based on a genetically programmed desire for the largest harem and offspring is not going to be how I might expect a female run power structure to be driven.

Then there is the question as to what constitutes political power. Again this contains a whole slew of assumptions. In the end power belongs to whoever’s word rules. There are plenty of societies where the notional political leaders are beholden to other powers. In the wider sense of power, all power hierarchies are political, and it makes no sense to use the word political as a modifier on power. No matter who holds sway, their power is political.

Power emanating from a masculine view of strength where a leader is one who has vanquished others. You are not going to find a society where women dominate the power hierarchy through muscle power or military prowess.

I think you’re reading more into what Czarcasm asked then what he stated. He isn’t requiring anyone to have been vanquished and was pretty clearly in the OP that he’s asking for any society that was truly matriarchal. So far, for the most part, we’ve gotten examples where women have held important decision making positions but not one where they outright ruled.

Well he keeps rejecting examples of where women hold significant power. The requirement seems to be for absolute power with no male power at all. My point is that this is a very patriarchal view of power. It requires a mirror image of absolute male power. The answer is always going to be more nuanced otherwise the question sets itself up for failure.
A society where women are the ultimate powers behind the throne seems to fail because there is a notion that if there is even a puppet male political hierarchy it can’t be matriarchal. That projects a masculine view of power on the reality.
Power resides in those whose word holds sway. Nobody else.