I didn’t see an existing thread. (Mods: feel free to merge this if it’s duplicative).

This season continues to disappoint. Maybe I’m misremembering, but it seems to me that in previous years the teams had themselves sufficiently in shape to complete a dinner service by now. I don’t see any of these people emerging as a winner. The previews for next week hint at some major shake-up, so maybe the producers have reached the same conclusion.

I can’t think of any highlights worth discussing. Anyone else?

I did, however, enjoy him telling that bitch of a customer to fuck off after calling her a dog.

Also, I was mildly pleased to see that Carol actually has hair. I thought the bandanna had been surgically attached to her excessive forehead.

Based on the previews, I would guess that the people at the hotel in Atlantic City are crapping their drawers at having to hire any of these folks to be their exec chef. I’m guessing something really is going to come down next week and the top prize is going away.

Robert is a misogynistic douche but I actually feel bad for him when it comes to these rewards that he cannot participate in. You think the producers could find something that doesn’t humiliate the guy.

Gordon slays me! I love the guy, but there is no way in hell’s kitchen you would get me on this show! He’s brutal.

The ads for the computer game, with an oddly-drawn cyber-Ramsay berating you, are disturbing.

I can see it being a Robert vs Danny final, with Danny coming out on top.

Oh, for those who missed it, here’s how you get 20 bleeps out of Gordon in 1 minute. 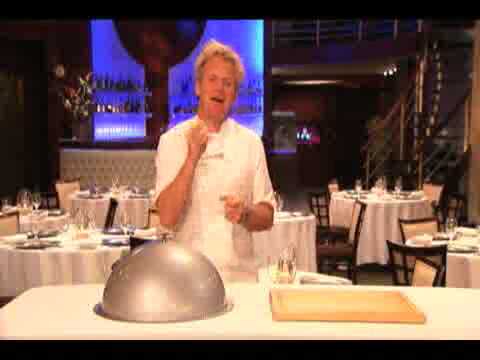 Robert is a misogynistic douche but I actually feel bad for him when it comes to these rewards that he cannot participate in. You think the producers could find something that doesn’t humiliate the guy.

I have a sneaking suspicion that the humiliation is intentional. I mean, the whole freaking show is about belittling and embarrassing the contestants. I’m surprised GR doesn’t carry around a rolled up newspaper, whapping people on the nose and shoving their faces into their culinary mis-steps.

The ads for the computer game, with an oddly-drawn cyber-Ramsay berating you, are disturbing.

We have the game for wii and it is pretty funny–he calls you various names like you “fkg donkey”! (bad words bleeped, tho)

Geezus, is Ben an arogant asshole or what? And I cannopt think of a single service he has done well. In my mind Danny has shown to be the class of this crew and that isn’t saying much.

I agree with Tom Tildrum that the episode was pretty unremarkable.
I’m not a big Robert fan. I think he might eventually become a formidable chef, but does not seem to be quite there yet. However, I thought it was pretty funny when he did his Mr. Gotrocks voice and said “I’ll have the poached halibut. Make sure it’s extra poached.”

My own tastes run towards simple and traditional meals, but really, if those were the most exciting menus they could come up with none of them is ready to be an executive chef anywhere.

Hasn’t it been a while since Ramsay sent Julia (of Waffle House fame) to culinary school promising to have her back?..I wonder if that could be part of the unprecedented event next week.

As I said in another thread, the winners are never really in charge of a kitchen. Last season the contestant won a position of “Executive Chef” at Ramsay’s new restaurant in West Hollywood. However Ramsay later clarified in an interview that it was just an honorary title that carried a $250,000 salary. The real prize (aside from the money) is that you’re going from (at best) a middle tier restaurant and getting solid experience in a Michelin starred establishment. Most of these people never would have gotten that opportunity if not for this show.

Hell’s Kitchen doesn’t pick its contestants from the culinary cream of the crop, the reward in my mind is that winning gives you the opportunity to advance your career in a direction you probably wouldn’t have otherwise. The problem is since none of these people are what I would call highly skilled historically the prize has never worked out like that for them; it ends up just being a decent cash prize and once their year is up they usually end up somewhere else.

I actually would speculate that the show itself is the entity that pays their salary while they work at the Vegas restaurant.

I just saw last week’s episode last night. If Danny, Giovanni, and Paula aren’t the top 3, I am going to be very suprised.

Pompous Doofus should be Ben’s title. I didn’t like how Robert and Danny just let him put together that pretentious as hell menu with stuff on it they didn’t even know…and apparently neither did Ben.

Andrea is just a whiny bitch who doesn’t think she makes mistakes ever. Maybe with Carol gone we will see another side to her.

Robert doesn’t have the chops to be an executive chef.

Danny, Gio and Paula are getting the quiet edit. We haven’t seen much from them so far I think because they are good solid chefs who aren’t contributing to the high drama that makes Hell’s Kitchen into a show.

I would really love to see chefs on caliber with the ones chosen for Top Chef competing in Hell’s Kitchen.

I’m guessing Danny and Paula will be the final two. You never hear him really berating Danny and he always seems to do at least a decent job on his station. And hell…before the last episode I didn’t even know there was someone named Paula on the girl’s team! So that makes me think she must be pretty good not to attract Ramsey’s wrath.