Help me colourise this image of US infantrymen from WWII

I’ve been getting into colourising old black and white images.

There’s no way of pulling out the colours from a black & white image so choosing the right colours is a mixture of research and artistic choice. The skin colours are by far the most difficult

For instance here’s my image of King George V colourised by me from a black and white image. I’m still not sure about the skin colour but I’m getting there… Imgur: The magic of the Internet. This was an easy one to colour as a colour portrait was made from this sitting so I could just copy the colours from that…

I’m currently trying to colourise this image of these American soldiers at Attu Island. 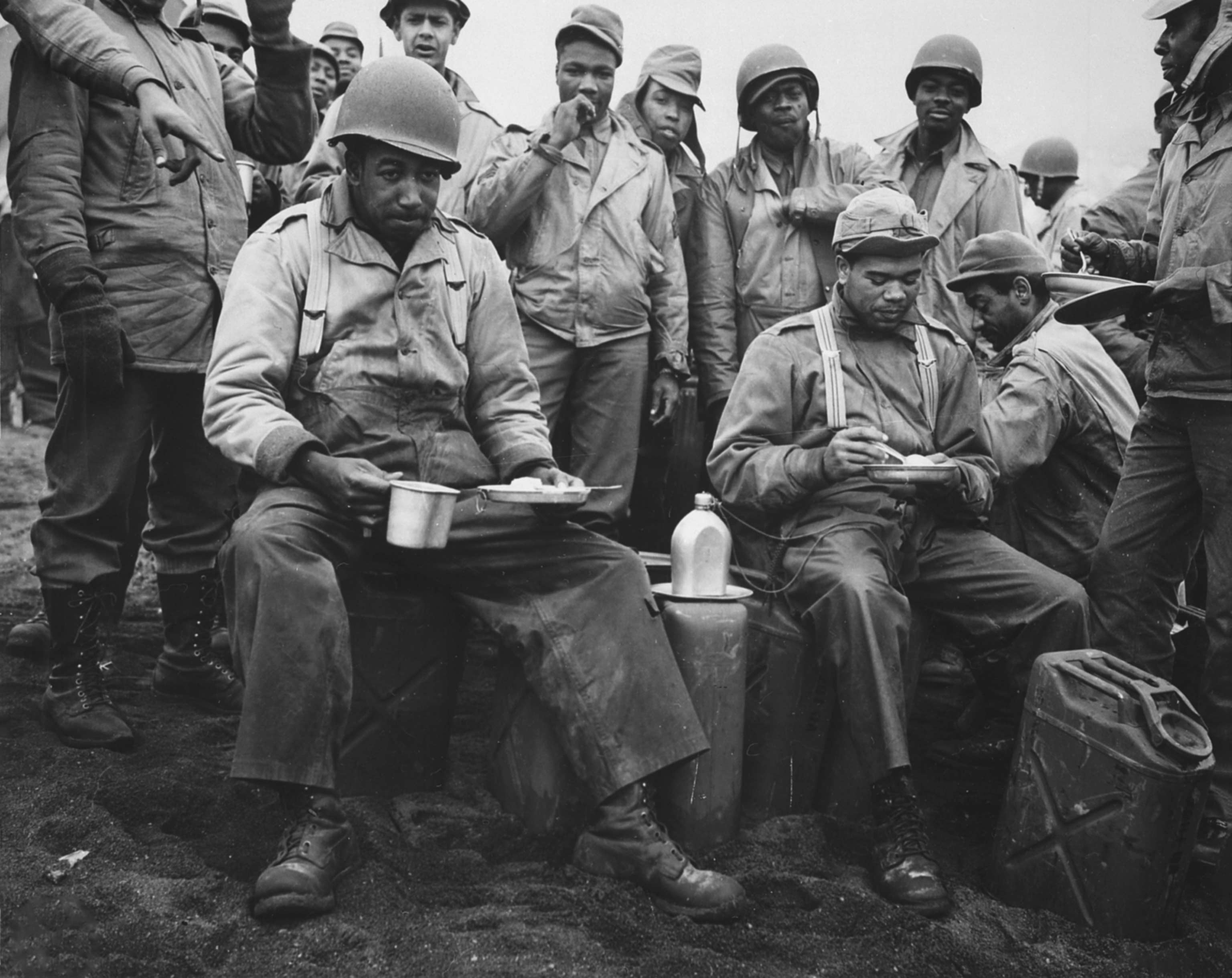 Black American soldiers at a field lunch on Attu Island

…however I’m struggling to find accurate colours for the fatigues. I thought this might be the 7th division but these guys are not wearing any emblems and what’s also really puzzling to me are the suspenders/braces. They have a stripe on them that I’ve not seen in any of my research. Some of their jackets are also hard to find.

Anybody got any pointers?

The M1941 Field Jacket varies between tan and light green (and you get variations). At least one of them is wearing another garment, possibly a mackinaw. The suspenders are probably private purchase. You want to talk to re-enactors and uniform collectors’ boards.

Thanks - got the field jacket! The suspenders threw me because two of them are wearing what seem like identical ones. I wonder if there were rules about what colour items like that should be if privately purchased?

Disappointingly the sand on Attu Island is quite dark!

I doubt those suspenders are regulation. If they were, there wouldn’t be any kind of color scheme to them. They’d just be dull khaki. (I own a set as a collector’s item.)

The ones in the photo look like they’re quite brightly colored, so I’d just go with whatever you think works.

With regard to the color of the field uniform, one website (At the Front) has this to say:

Color: This is the most commonly misunderstood aspect of field jackets and WWII uniforms in general. Despite their khaki appearance in photos and film, the cloth used for the jackets was olive drab number 2, not “khaki”. (Jackets made from cotton twill were olive drab number 3). Although the shade varies widely due to fluctuation in the dying process, it is a pale olive- sometimes more gold or tan than others, but definitely greenish. Heavily worn and faded jackets often lighten considerably, but when compared to actual khaki, the olive tint is easy to see.

FYI, another website has this to say about “fatigue” uniforms:

Also FYI: The jackets most of the men in that photo are wearing are called Parsons jackets, after the US general who oversaw their design. They’re the kind Sgt Saunders et al. wore in Combat! I would have given my eye teeth for one when I was a kid.

I just blew up the photo to take a closer look. I can’t be 100% sure, but I think the suspenders the man on the left is wearing has hooks at the end of the straps. If I’m right, that is a GI pair (the hooks were used to fasten the suspenders to cartridge (or pistol) belts through eyes set in their material).

I think the suspenders are part of their pants, which are actually heavy winter gear worn over their uniforms. Look at the guy sitting on the left - his pants are very high and have no belt or belt loops, which mean that they’re being held up solely by the suspenders.

I think the suspenders are part of their pants, which are actually heavy winter gear worn over their uniforms. Look at the guy sitting on the left - his pants are very high and have no belt or belt loops

Yes this is how I’ve been colouring it, and once coloured in it’s very clear.

…this is becoming very pastel green…

That looks like one white guy, standing above the helmet of the guy sitting on the left.

I’m getting there but will probably not finish this until tomorrow, however I will post it once I do and because the colours are all saved in editable layers I can alter anything quite easily.

The white guy is probably the officer or noncom in charge of the work detail. Can you make out any insignia of rank?


"The blue work clothing remained in use for fatigue through about 1943 for all branches of the army. "

The other thing that bothers me is that the guy in front might have a leg pocket on the left leg of his overalls. Apart from maybe being blue, I’m wondering if it’s “uniform” at all. 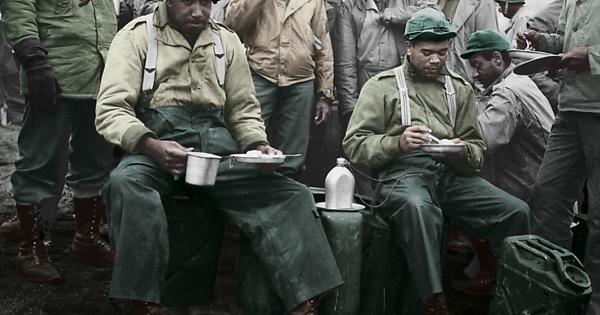 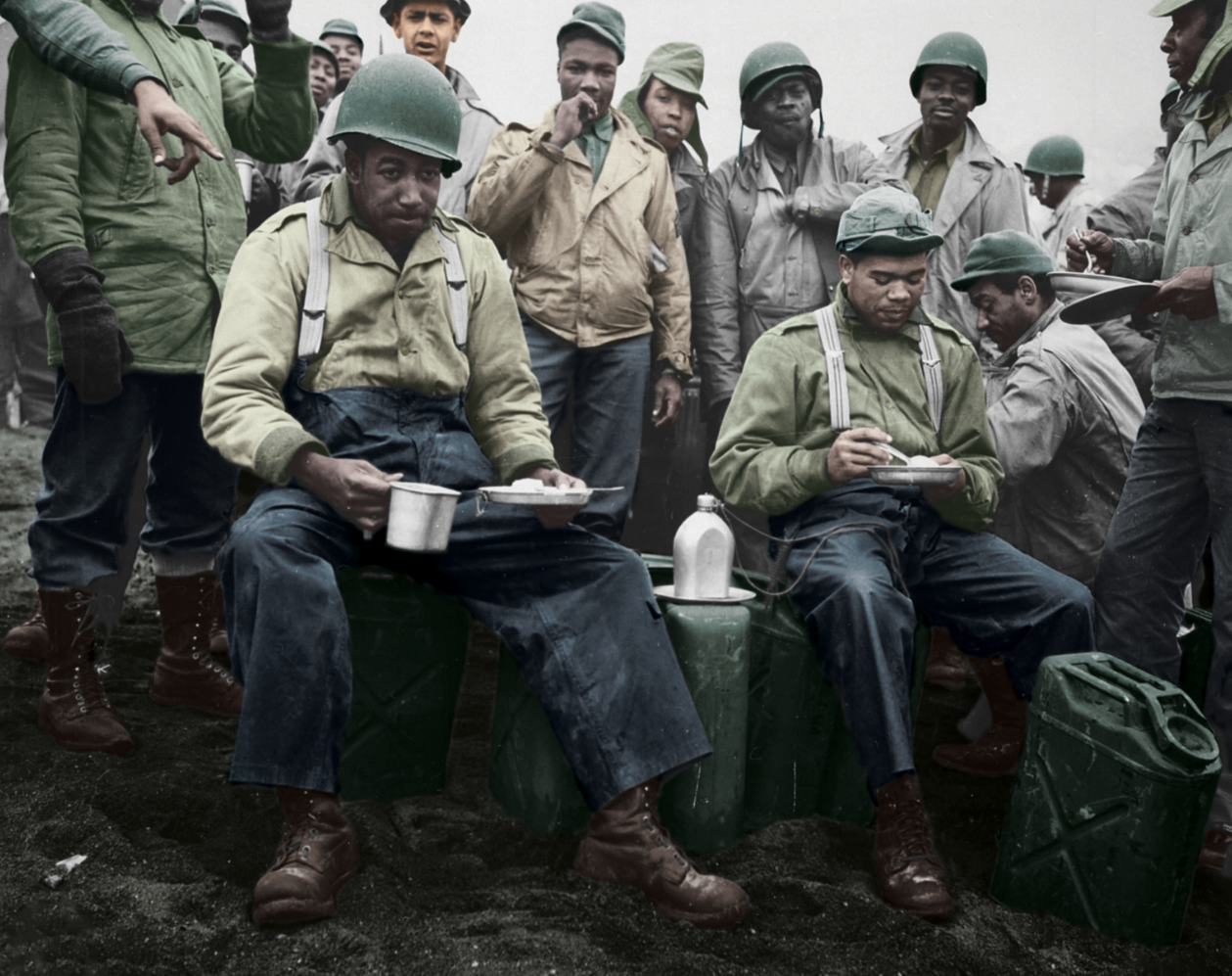 EDIT - blue seems more right but I wouldn’t have expected it in an army photo which actually really changes the feeling of this photo to me. Instead of soldiers, equal to every other soldier, these are black men put to work… so it’s an important decision.

Perhaps that’s all just in my head.

SECOND EDIT: the colours that are there are VERY rough - all will be refined.

Sadly, black servicemen were not equal to white ones during WWII. Their primary function in the US Army was as “combat support” troops, i.e., truck drivers and laborers. With the exception of the Redtails of the AAF, they weren’t used as combat troops until very late in the war. (In the Navy, they were largely cooks and messmates.)

So, if you want to be historically accurate, it might be best to go with fatigue denim blue. (And all troops wore denim blue fatigues at one time or another, not just blacks.)

I might go with denim for the front two with the rest in green as trousers/pants worn by the rest look like different material.

And yes it’s about historical accuracy where at all possible. These are historically important editorial photographs and it would be a disservice to get things dramatically wrong.

A brief explanation of the different uniform types might be a good addition to any text accompanying the photo.

I’ve just been trying for figure out who they were, and it’s not easy. Labor brigades and Engineers get a lot less publicity that combat troops!

The morale of many United States troops in Alaska and northwest Canada in the first year of the war was dangerously low, because of insufficient clothing, monotonous food, poor shelter, long tours of duty, and the visible contrast between troop conditions and those of contract laborers who, often employed on the same jobs, were better fed, more adequately clothed, and better paid. Few troops going to northern regions in 1942 had had specialized preparatory training, such as that later given to mountain and desert troops; nor in many cases was appropriate clothing and equipment provided for them.

Black troops were sent to work on the Alaska highway in 1942: they may have been moved to Attu in 1943. Somebody built an airport on Attu in the first two weeks: I don’t see that any of the Airport brigades were black, but I might have missed that. Apart from the caption, they might even be CB’s: most photographs of CB’s are in dress uniform, but at least some of them wore helmets and were trained to fight (like Army combat engineers).

Interesting. That really is a neglected theater of the war. I remember learning about the Japanese invasion of Attu and Kiska when I was in fifth grade, but the most interesting part was that the IJ forces left because it was “too cold” there.

The only mentions I’ve heard of it since have been in documentary series like The World at War.

Ok, still looking. I see that the 93d Engineer General Service Regiment (Colored) served in the Aleutian Islands campaign after working on the Alaskan-Canadian Highway as a “Construction Brigade”. Not to be confused with the 93rd Infantry division – also “colored”.

The National Archive labels them as men from a “labor battalion”. I’ve never even heard of labor battalions, so I don’t know if they’d be drawn from a (Colored) Engineer General Service Regiment, or something different.

Here we run into another problem: apparently black units were not only kept out of contact as much as possible, but also not documented very well.

As you may know, the term “labor battalion” in some armies is equivalent to “punishment battalions.” I think that in the US Army it simply referred to “unskilled labor.”