I’ve recently read Hamlet and seen most of the Kenneth Branagh film (I missed a few scenes–apparently, the best scenes, but I’ll be renting it soon to find out.), and have become entirely entranced with the work. Can anyone recommend some humourous or interesting sites? Nothing too in-depth or analytical, please.

Thank you for any help.

Oh, and I’ve been to the fantastic text game that was floating around the boards recently. Spectacular. A favorite.

Have you seen Hamlet’s Cat’s Soliloquy?

You could try Mystery Science Theater’s take on an old black&white (I believe) German Hamlet, dubbed in English. It’s not the best episode…actually, it’s not in the upper 50% of MST3K episodes. At least in part because this particular production is an instant cure for insomnia, and also in part because I think the Brains were somewhat leery of truly slamming the Bard.

Have you read Rosencrantz and Guildenstern Are Dead ? It’s a short play by Tom Stoppard (who wrote/co-wrote Shakespeare In Love) about these two minor characters from Hamlet. It’s been quite a while since I’ve read it, but I remember it being very funny. There was a movie made a while back (early 90’s) but I never saw it.

Also, while not as good as the Branagh version by most accounts, the Hamlet movie with Mel Gibson is worth watching and has a great supporting cast.

You definitely want to encounter Tom Stoppard’s play Rosencrantz and Guildenstern Are Dead. It was filmed circa 1980. I don’t know if it is available in video or DVD.

It is basically a n existential fable: what if you are a bit character in your own life?
Very funny, too.

I am studying Rosencrantz in school now, which I think is terrible, since Stoppard apparently intended the play to be felt and not studied.

Have you read the Lost Quarto or

I ask to be or not to be.
That is the question I ask of me.
This sullied life, it makes me shudder.
My uncle’s boffing dear sweet mother.
Would I, could I take me life?
Could I, should I end this strife?
Should I jump out of a plane?
Or throw myself before a train?
Should I from a cliff just leap?
Could I put myself to sleep?
Shoot myself ot take some poison?
Maybe try self immolation?
To shudder off this mortal coil,
I could stab myself with a fencing foil.
Slash my wrists while in the bath?
Would it end my angst and wrath?
To sleep, to dream, now there’s the rub.
I could drop a toaster in my tub.
Would all be glad if I were dead?
Could I perhaps kill them instead?
This line of thought takes consideration-
For I’m the king of procrastination.

Perhaps Fox In Socks, Prince Of Denmark is more to your taste.

Even easier is go to Hamlet Online which has links to everything I mentioned plus lots more…even a Chinese Hamlet.

Have you read Rosencrantz and Guildenstern Are Dead ? It’s a short play by Tom Stoppard

Er… I agree that this is a point so minor as to barely worth raising, but why would you describe it as ‘short’? I’ve seen this play performed in London’s West End by a reasonably good pro cast, and I wouldn’t say it was short at all. In fact, it was one of the longer evenings I’ve spent in a theatre.

Re the OP, the Bard’s source for Hamet was the Danish story of Amleth, which you might like to track down if you’re into Hamlet trivia. It’s interesting to note some of the parallels and discrepancies between the source tale and the play.

Oh, bless you all! Thou hast sated my lust for the prince, if only for an afternoon!

Do continue with anything you may find. Many thanks to you all!

There is a modern version of Hamlet, I called “Hamlet” staring Ethan Hawk as the “prince”. The story takes place in North America (I guess New York, but I don’t think they actually say) and Denmark and Norway are two huge conglomerates fighting for the same markets. The “play” is a short film produced by the character of Hamlet, who always has a videocamera and all this technological stuff with him (which allows for his soliloquies). I belive Rosencrantz and Guildenstern are college budies, or one of them is a security guard, I don’t remember. Julia Stiles plays Ophelia, and Bill Murray is Polonius (although I must say that I found his acting horrible in this version)

The movie uses the original words of Shakespeare, but is a pretty good modern adaptation of it. I enjoyed it, and have seen it twice. 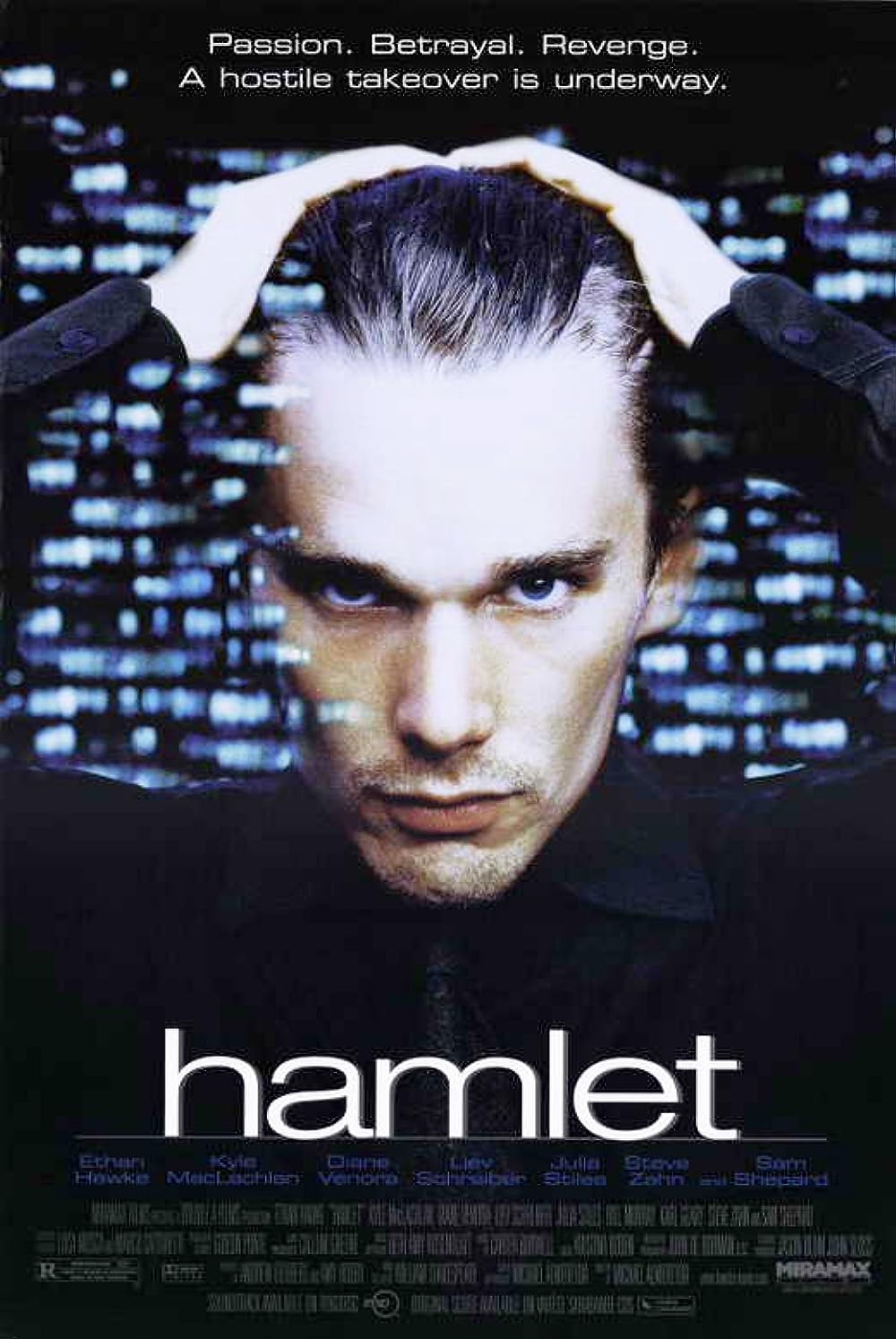 mnemosyne, thank you for explaining that movie. I was under the impression it was merely based on Hamlet and not as saturated with actual text. Thank you; I’ll be sure to rent it sometime soon.

Another film to catch is In the Bleak Midwinter, alternatively known as A Midwinter’s Tale. It’s about a church group putting on a production of Hamlet as a fundraiser. Directed by Kenneth Branagh, and starring several of his regular actors. It’s utterly hysterical, especially if you’ve ever performed in amateur theater.

It’s not yet available on DVD, but can be found on VHS.

Sounds like great fun, Kizarvexius. I’m starting to enjoy Branagh quite a bit…I might just rent Harry Potter 2 just to skim through his scenes.

I’ve bought R&G Are Dead, and have finished Act One. Thus far, brilliant. Quite funny, and Hamlet has made his first speaking appearance. Can’t wait to continue! Thanks all for the recommendation!

Here’s the leet version. It’s a lot funnier than you’d expect, though the intro is way too long.

For a very readible treatment of Hamlet, check out Isaac Asimov’s Guide to Shakespeare. This book attempts to explain what is going on in each of the plays by providing some context for the societies on which the plays are based.
For example, it is currently popular to provide a Freudian explanation for Hamlet’s behavior. He seems to be extremely unhappy that his mother remaried, and so, in today’s culture, it is easy to conclude that he had unresolved sexual issues about her.

The Guide, by providing the cultural background for Denmark in the year 1050 or so, shows that Hamlet’s behavior is completly explicable without such modern interpretations. Of course, if, for whatever reason you want to insert a Freudian theme, you are free to do so. It just isn’t required by the text.
Basically, the concept of strict hereditary inheritance of a monarchy didn’t really get firmly established in Northern Europe until about the thirteenth century. Prior to that, the crown went to the member of the late king’s family who the nobles thought would be the most capable king.

So Hamlet is away at school (the university at Wittenburg wasn’t founded for another couple of centuries, but never mind) when his father dies, apparently of natural causes. Had he been at home, he presumably could have made a strong case to succeed his father.

He arrives home to find the question of succession already settled. The nobles have selected Claudius, due, probably, to effective politicking by Polonius (which explains why Hamlet isn’t real fond of him), supported by the sense of continuity provided by his marriage to Gertrude. By marrying Claudius, Gertrude has participated in disenfranching Hamlet.

Such things happened often enough in British history that Shakespeare’s audience would be quite familiar with these sorts of politics.
Also, Hamlet’s problem is not indecisiveness, but that he is constrained from taking direct action.

If he kills the king openly without cause, he will be condemned as a murderer and regicide, and will be unable to take the throne. Conversely, if Claudius openly murders Hamlet, he will likely lose the throne. Both parties are thus prevented from acting directly, and are forced instead to employ a series of increasingly complex strategies, which is what makes the play so facinating.

You might want to check out the Reduced Shakespeare Company’s Compleat Works of Wllm Shkspr (Abridged) for a very funny take on Hamlet. (As well as the rest of his plays, but mostly Hamlet)

I’ll be off to the library later today, BrotherCadfael, and look forward to checking that one out. Your overveiw has intrigued me greatly.

I read R&G Are Dead between yesterday and today and loved it. I quickly lent it out so as to share the wealth with a friend.

How true. I doubted you upon reading the comment, and even so far as into Act two, but around the halfway point I realized that this was exactly true. Thank you for prodding me into reading it.

You might want to check out the Reduced Shakespeare Company’s Compleat Works of Wllm Shkspr (Abridged) for a very funny take on Hamlet. (As well as the rest of his plays, but mostly Hamlet)

I just bought that DVD last weekend. It should have been accompanied with a large warning label and a family pack of Depends.