Help me identify this 1980s spy manual for kids

I absolutely adored Get Smart as a kid. It led to me reading a lot of spy-themed children’s literature. There’s one book in particular that I was fond of but whose title and author escapes me. Can anyone help me identify it?

The book was billed as a manual for secret agents, but was actually aimed at kids. It consisted mostly of short tips ranging from a sentence to a paragraph in length. Each tip was accompanied by an icon that indicated its category. For example, tips concerning how to disguise yourself used a beaglepuss icon. An example disguise tip would have been something like, “You can disguise your footprints by wearing shoes several sizes too big. Whoever discovers the footprints will think that they were made by someone much taller than you.” Other tips covered things like special equipment and how to read and write secret codes.

I probably read the book in the very early 1990s, and it seemed new-ish at the time, so I’m guessing that it was published some time between, say, 1982 and 1992. I could be wrong, but I vaguely recall that the cover was blue.

I know that we had a (thin softcover) book like that when I was a kid (early 80s), but I couldn’t tell you for the life of me what it was called. That’s where I first saw the “stick a hair over the crack of a door to tell if it has been opened” trick.

Seems like a fascinating book (and I loved many other Usborne books as a kid) but I don’t think it’s the one that I remember. The page samples from the Usborne book show lots of full-page illustrations, whereas I’m pretty sure the book I read was almost entirely text.

I had that one when I was 10. I gosh-darned loved it! Even though none of it was realistic in any way (some Usborne books were based on real things, some on fantastical things) it had fun puzzles and jokes in it, some hidden away in the corners to be discovered, and I loved that kind of thing.

I think I had The Funcraft Book of Spycraft, but that doesn’t sound like it, either.

Good grief, that’s the same one I had, and indeed a much reread and loved book.

Could it have been The Big Book of Secrets by Gyles Brandreth? My memories of it are very similar to what you describe. 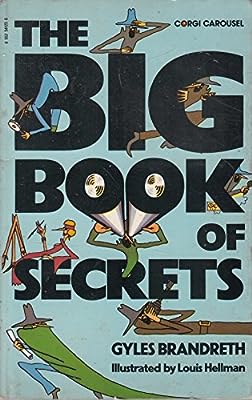 (In retrospect, it was “The KnowHow Book of Detection” that had the “hair-over-the-door” trick.)

Could it have been The Big Book of Secrets by Gyles Brandreth? My memories of it are very similar to what you describe.

Without seeing the inside of the book, I can’t be sure. Unfortunately, neither Amazon nor Google Books has any previews, and the book isn’t available from my university library (even via interlibrary loan). Perhaps someone else here has a copy and can confirm it matches my description?

I also had a book as a kid (though it might have been a library book) that was nothing but nonfiction accounts of successful (and unsuccessful) spies and how they did it. The one that stands out was a Soviet spy who scored a major intelligence coup by asking for and getting a guided tour of an American military base.