I recall, or think I recall, a thread on this, but couldn’t find it. Looking for a used book online, the same book in the same condition ranges in price from $2 to $250 at different sellers. The book isn’t rare or anything.What is the business model and what explains the big range?

Some of it is due to artificial “intelligence”. Some prices are automatically set by “smart” algorithms that scan other books of the same title. If seller A has an automated system that prices his book 5 cents higher than other copies of the same book (so he can make a better profit) and seller B does the same thing, then both of their algorithms price each other’s books, they get into a runaway condition of constantly incrementing their prices. Let’s say the book starts out at $2, then seller A’s algorithm sets his price to $2.05, seller B’s algorithm sets his to $2.10, causing seller A’s algorithm to go to $2.15, etc. With no limits in place, you end up with ridiculously high prices.

Not so “smart” of an algorithm after all.

The first thought that comes to mind to me in these situations is money laundering. I sell you (a friend) a cheap $2 book and claim its a $250 book and the money I get for the book is now legitimate income. Who is there to question that the book was not a first edition signed by the author? As long as you are not selling them for thousands of dollars you can keep under the radar of the IRS.

Not to derail the thread with politics, but I think that this is along the same idea that Hunter Biden’s art isn’t really worth what it sold for. Let’s please not discuss Hunter Biden, its just an example. Please.

It could be rarity or people just wanting to own a classic.

Since it’s a book I wrote, I’d like to believe this, but I have my doubts.

As an Amazon book seller who also manages the account at my local library, we can charge whatever we want, up to an upper limit that last I heard was in the 4 figures. Some of the really outlandish numbers may be due to algorithms, money laundering, or even people who price something that high for kicks and giggles.

Some of it is due to artificial “intelligence”. Some prices are automatically set by “smart” algorithms that scan other books of the same title.

This is true and it happened once that two algorithms got into a loop with each other and ran a book worth (maybe) $14 to almost $23.7 million (not a typo). The video below tells the story and explains the strategies these algorithms used. More broadly, it shows how these algorithms jack-up the prices of some things like books that would otherwise cost us less if those were not working in the background. 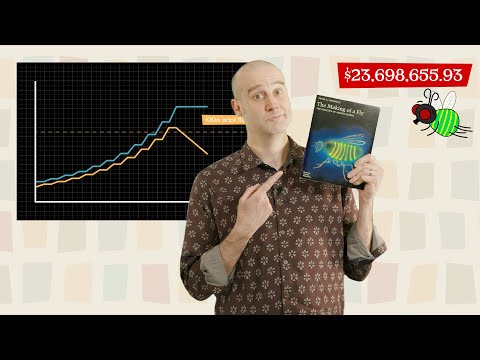 This question has come up in similar context before. Another answer is that the silly price is a placeholder for a book that can’t be sourced, but where there are disincentives to removing the listing. Disincentives include how search rankings operate. So the book remains listed and appears early in customer searches but no one will actually buy it. When stock is found the book has retained its search ranking and once the price is sensible some will find and buy it
No cite other than a previous thread.

More broadly, it shows how these algorithms jack-up the prices of some things like books that would otherwise cost us less if those were not working in the background.

That’s a great video, and I would have posted it if you hadn’t done so first. But a situation like what the OP describes could also result from a failure to use algorithms and automated pricing.

Something like a used book doesn’t have an inherent “correct price”: it’s a matter of supply and demand. If you don’t know what other sellers are charging for a particular book, or what it’s sold for in the past, how do you know what price to ask? And it would be nearly impossible to keep track of that “by hand” if you’re selling many different books that many different other sellers may or may not also have for sale.

So “buying some of the expensive copies to drive the price up for my own book, then release a few copies I have in a closet somewhere and clean up” may not be the best retirement plan. Dang.
I looked for the above-mentioned earlier thread, to no avail. If anyone has a link to it, I’d be grateful if you shared.

Of course there are other book sellers who price it when they first list it and never reprice (or maybe after 5 or 10 years). This doesn’t explain the crazily high prices, but explains the $30 price for a book where there are several current copies available for $5. [$30 was close to competitive when they listed it; since then several copies have come into the market–while demand has dried up]

I looked for the above-mentioned earlier thread, to no avail. If anyone has a link to it, I’d be grateful if you shared.

There have been several threads about used book pricing in the past, including this one (in which @Exapno_Mapcase linked to a couple of others)

Yeah, one of a similar thread descended into a discussion on money laundering. Fred sells books for $1000 each. A random number of people each buy the book for cash, and Fred pockets the money as legitimate income. The trick is to have a few hundred (or thousand) people take $1000 in bills, buy a money order randomly all over the country, (or send to Paypal) and order the book. If you can get the book for $5 (or better yet, pretend it was shipped but don’t actually ship it) it’s all profit.

A clever Idea but there has to be a simpler way to launder a large sum. It still comes down to finding hundreds of people to each perform a transaction.

That’s not the same as buying Hunter Biden’s art or a campaign buying crates of a Trump family member’s book (not to be partisan about examples). And not to pick on either, the book thing is a common tactic in politics to (a) put money in the pocket, (b) convert funds to income, and (c) gift to campaign followers to “get out the message” and (d) it may boost book sales by getting the book on the best seller list.

I just looked up a couple of my own books on Amazon. The first one was shown at $237 but they have no new or used copies to sell. It’s original price was something like $50 in 1985. The second one was listed at something like $120, about twice its original price in 1991 and they actually had a couple copies for sale at that price. PDF versions of both books can be downloaded free from my web site. I don’t understand their pricing models at all.

Is it? Would that really fool the IRS?

The second one was listed at something like $120, about twice its original price in 1991 and they actually had a couple copies for sale at that price.

To be fair, a book selling for $62.50 in 1991 would be worth $133 today through inflation alone. (I get that a book need not follow that curve for many reasons…just a data point)

It’s less about what it is worth today and more about the relative cost in the past compared to now.

I get that a book does not endlessly appreciate in price because of inflation but, if you were someone who bought it in 1991 and wanted to recoup what you paid (used book) then that is what you need to charge. I do not know if that is what actually affects the price. As has been noted, it is a bit of a mystery.

Is it? Would that really fool the IRS?

The thing is - as always - once you attract the attention of the authorities enough that they want to investigate, you’re probably already screwed. I doubt there’s any scheme that would stand up to a decent audit. From simple things like how to buy 1,000 money orders - many such stores are going to have security cameras and the people cashing the money will be tracked down. Someone buying a money order for $1,000 in cash, is going to be pretty memorable I would think. Proof that you acquired and shipped the alleged high-riced merchandise, who you shipped to, etc- all traceable. The local post office or FedEx will remember a pile of 1,000 parcels over a short time from one customer (or the lack thereof).

It’s like the pizza parlour scheme, or similar business - you can only inflate receipts so far before it becomes unrealistic and unjustifiable.

So for the OP’s question, I can only conclude like others, it’s a combination of human stupidity and aided and abetted by computers.