How are errors in survey due to plate tectonics fixed?

Continents drift in one direction or another. Relative/absolute speeds vary from 0.6 cm to 8 cm a year. I no longer know which definitive cite to use but this blog is close to it:

So, given that one’s traditional reference points on land are actually moving relative to the Earth’s true north, or where the equator crosses the international date line, by as much as 6 centimeters a year, what problems in survey/geodesy crop up and how are they fixed?

Most surveying is done relative to other points on the same tectonic plate. It doesn’t matter if North America moves a centimeter a year; it only matters if my land moves relative to my neighbor’s.

In some parts of California, fault creep has got to be a problem to surveyors. Examples.

Continents drift in one direction or another. Relative/absolute speeds vary from 0.6 cm to 8 cm a year. I no longer know which definitive cite to use but this blog is close to it:

So, given that one’s traditional reference points on land are actually moving relative to the Earth’s true north, or where the equator crosses the international date line, by as much as 6 centimeters a year, what problems in survey/geodesy crop up and how are they fixed?

If the titled land shifts totally, then the new location is, ignore any measurement to traditional refernence points… just go and measure the fences and driveways and footpaths and so on… you find the X by Y block, there it is there, done.

In some cases the land owner might say "But see, two feet of my garden is ove there ! Can I keep it OVER THERE ? ". In most cases, the smaller part that is affected is repaired… the two feed of garden is now the neighbours land…
Imagine three blocks, A B and C.
AAAAAA
AAAAAA
AAAAAB<
BBBBBB
BBBBBB
BBBBBC<
CCCCC
CCCCC
Then simply the two parts labelled < are fixed.
The neighbours probably share the cost of redoing fencing, landscaping,etc, that is affected … the gov repairs the roads, footpaths, etc .

pricate land titles have probable avoided being directly at a fault… its usually public land at the fault.

For surveying purposes, it’s probably not that important, unless you’re surveying across a fault line.

Plate tectonics is a bigger deal for GPS and GIS systems, as they’re referring to a fixed point on a model Earth, and the actual point is say… 6 cm to the right. As a result, GPS is actually turning out to be a great tool to monitor and measure continental drift.

I imagine that having lost a few centimeters of property is pretty low on the list of inconveniences one would experience living on top of a rapidly creeping fault.

Land can also move from other causes. Erosion, gradual claiming of land, sinking ground level due to mining underneath. Land gets re- measured all the time. If you pay attention, you can see the little reference points on the ground where surveyors put their equipment.

Land can also move from other causes. 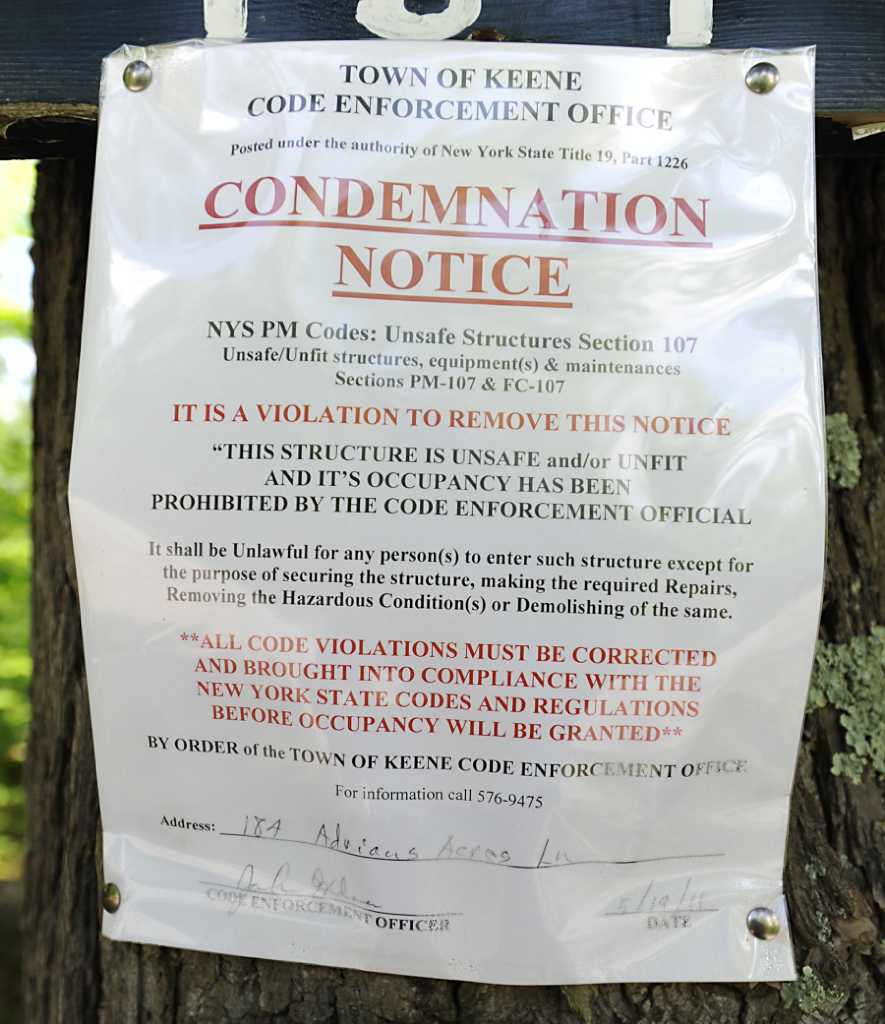 When the low rumble of his refrigerator's ice maker in the night snaps him out of fitful...

I haven’t seen an update on this case. A real bummer to come home and find this going on.

I haven’t seen an update on this case. A real bummer to come home and find this going on. 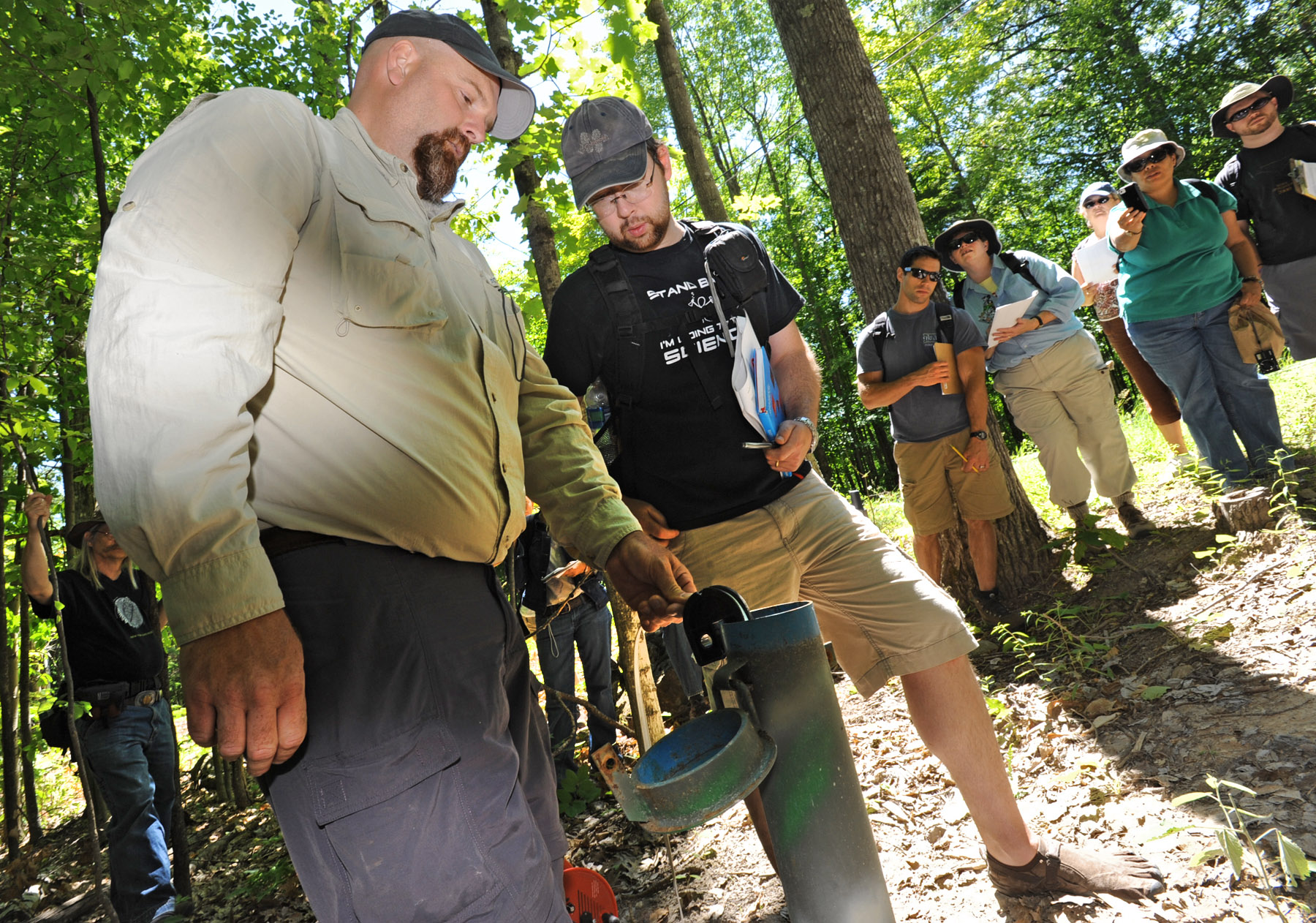 The lesson in a landslide

I wonder how ownership works with land that’s split by a fault line. I suppose that eventually you end up with two plots?

I know that my plat map defines everything I own from an imaginary line running down the center of the street. Heck, technically I own half the street.

So if the plates shifted parallel with the street, the shape of my plot would not change, just the dirt that happens to be included within. In any shift like that, I’d have to fix fences at the very least, so I imagine that we’d move everything attached to the dirt back to where it belongs relative to the plat map. I might lose or gain ownership or a tree or a shrub.

Land surveys, and indeed all positional location is not done relative to a single coordinate system. The Earth is divided up into a large number of regions (mostly on political boundaries, but large countries have more than one region) within which locations are referenced to a local datum. In general these datum points move along with the rest of the land mass. Your measured locations won’t move due to tectonic movements. GPS receivers have a database of all these dataums and automatically convert the location they provide to the appropriate datum. You can usually get the GPS receiver to not convert, or maybe even force it to use a different one. But by default you will get the appropriate one. Land surveys that use a GPS (which most now do) remain rooted to the local datum, and nothing change as the plate move.

At a minimum this is necessary of you want to use a printed map with your GPS unit. The advent of GPS has not changed the use of the various datums.

Conversion between different datums is a pain, but necessary step when processing large scale surveys (for instance geophysical surveys).

I am surprised so many people assume that the Metes and Bounds system is used everywhere. In most of the US there is the Public Land Survey System which uses co-ordinates.

In each region/state that uses PLSS, there are baselines from which everything else is marked off. As long as your region isn’t being broken up by fault shifts, the baseline system will remain intact despite tectonic drift, however, the surveyors would have to adjust their GPS measurements and such to correct for any shift.

Note that changing the GPS system itself so that it would provide corrected locations of shifting things would be a real bad idea. Not everyone wants the adjusted position.