When people talk about the health risks of smoking, they mostly talk about lung cancer (a form of cancer) or heart disease.

However if totally eliminating all forms of cancer and vascular disease would only add 8-9 years to life expectancy, how can a lifestyle factor like smoking remove 10 years? How does the math work? Most smokers will never get lung cancer, and lung cancer is just one of many forms of cancer. Ergo, wouldn’t the life expectancy hit of lung cancer due to smoking be measured in months (a subset of a subset of 3 years)? Aren’t something like 1/4 of deaths attributed to smoking due to lung cancer, and another 50% due to a higher risk of cardiovascular disease? But a total elimination of both these conditions would have a smaller impact on life expectancy than smoking itself.

Recently I read that waist to height ratio is a better predictor of health than BMI (waist size should be 1/2 your height). The study claimed that having a waist 80% the size of your height (so about a 58" waist on a 6’ man) can take 20 years off life expectancy.

I don’t get it. How does the math work? I saw another blog where a guy did a calculation on eliminating the top 20 causes of death combined. All forms of vascular disease, cancer, accidents, suicides, homicides, lung failure, diabetes, alzheimer’s, etc. His calculation was if you eliminated all 20, then life expectancy goes up by about 20 years. How can a large waist have the same impact on life expectancy as all these things combined? 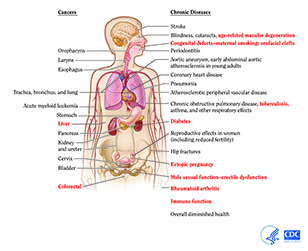 See the data and statistical information on health effects of cigarette smoking.

If you take a large population of non smokers and a similar number of smokers and compare life expectancies, it is not hard to see the difference. This is exactly what the life assurance companies have done and why smokers get better annuities, but pay more for life insurance.

There are no statistics available for what effect “totally eliminating all forms of cancer and vascular disease” would have. It is an estimate projected from other data. People die from wide variety of causes and all we can do to postpone death, is to avoid actions that increase risk. Life is a balance, so we may be aware that riding a bike is more risky than using a car, but we also know that there are some compensating benefits.

These statistics look at large populations, and there are wide variations within them. I had a friend who was a keep fit enthusiast. He had a healthy diet, exercised regularly and (as far as I could tell) had a happy marriage. He worked as a consultant pathologist so was more aware than most about what kills people. One Monday morning he saw his GP with a pain in his abdomen. His GP sent him straight to hospital for tests and he was diagnosed with an untreatable cancer. A week later he was dead.

However if totally eliminating all forms of cancer and vascular disease would only add 8-9 years to life expectancy, how can a lifestyle factor like smoking remove 10 years?

Because of the relative effects of infant mortality on the general population vs the smoking population.

But smokers are not the general population. Smokers are effectively all over the age of 12 and the vast majority are over 16. That eliminates infant mortality. The number of people who die between 16 and 18 is only about 1 in 150, 000, rather than one in 250.

I don’t understand this. Is it a typo? How would reducing tax for doctors save J Doe $250,000 a year? (they probably don’t earn that much).

I don’t understand this. Is it a typo?

Nope, an exaggeration for illustration purposes though.

Nope, an exaggeration for illustration purposes though.

Smoking can also start fires that become fatal. A couple years ago in my town, six people died in a house fire caused by a cigarette.

According to the U.S. Centers for Disease Control, lung cancer is responsible for 28% of smoking related deaths while 43% are attributable to cardiovascular disease - primarily heart disease and strokes.

In addition to Blake’s excellent point …

It’s entirely possible the differing estimates the OP sees are based on totally different data sets and significantly different statistical derivations and assumptions.

It’s entirely possible the differing estimates the OP sees are based on totally different data sets and significantly different statistical derivations and assumptions.

I do wonder if obesity and smoking are just symptoms of a lifestyle where a person doesn’t really value their health as much as someone who tries to control their lifestyle, and there are lots of other smaller risks that a smoker or obese person has which will increase their mortality rates. I’m sure you could easily make the data ascribe all the risk to whatever risk factor you are looking at, despite that risk factor being more a symptom of someone who doesn’t value self preservation as much as people who avoid that risk factor.

It’s typical in calculating such statistics to take any other such factor that you would suppose to be relevant to mortality (or whatever you’re trying to show is caused by the factors) and make sure that it isn’t important in this calculation. So if you wanted to show that smoking is the important factor in mortality, you would put together your two groups, the smoking group and the nonsmoking group, so that other than smoking there was no significance difference between the two groups. You would chose the people in the two groups so that they included the same number of people of each sex, each race, etc. You would chose them so that they were comparable in weight, height, etc. You would make sure that they were equal in annual income, etc. You would do this for every factor you could think of. That way you could say you had eliminated the chance that one of those other factors influenced the average age at death. I don’t know if the researchers who did this study tried to eliminate all the other obvious factors, but it wouldn’t be a good study unless they did.

Smoking can also start fires that become fatal. A couple years ago in my town, six people died in a house fire caused by a cigarette.

Yes, about 3,500 - 4,000 people die each year from house fires in the US. And 20-25% of those fires are caused by smokers, mostly by them falling asleep and dropping a lit cigarette onto something flammable. It would also seem that they are more likely to be victims, since they are right next to the ignition point of the fire rather than in some other part of the house.

Another life-limiting factor for smokers is auto accidents. They are sometimes distracted while lighting a cigarette, or by dropping a lit cigarette while driving. This causes a measurable increase in the auto accident risk for smokers; thus some auto insurance companies offer discounts to non-smokers.

It’s typical in calculating such statistics to take any other such factor that you would suppose to be relevant to mortality (or whatever you’re trying to show is caused by the factors) and make sure that it isn’t important in this calculation. …

It’s certainly a goal to control for all other factors. In many cases “control for” doesn’t mean “exclude from the study”, but rather “apply a fudge factor based on yet other studies”. Which can drive a lot of error based on circular estimations into the literature as a whole.

Wesley’s point is a big one. It’s often hard to separate a sign or symptom from a cause. Fever causes certain cell damage. But fever itself is a sign of a lower-level cause: infection, injury, or certain organ malfunctions.

The idea that obesity, couch-potatoism, and smoking are not causes, but rather are all signs of some deeper cause is a worthwhile idea.

It is always import to keep track of the difference between a risk factor and a causative agent. And of course, the difficulties when the two overlap. My favourite risk factor for ill health is simply being poor. No physiological manifestation - but a clear correlation. You can come up with dozens of factors that stem for being poor that contribute to health problems, everything from poor diet to lack of access to healthcare.

It would be interesting to know some the basics of how some the life expectation estimates were derived. A big problem is that everyone dies. Life is 100% fatal. If you eliminate the top 20 killers, just what are people dying of? And at what age? People do essentially just plain wear out. But how you start accounting for actual cause of death in the elderly, and how you fold that into the impact of these “top 20” killers would be interesting to understand. A great many elderly die with no firm diagnosis. Death being recorded as from whatever diseases they were currently most beset by. And for a massive number this is dementia/Alzheimer’s. What make this hard is that different conditions have different peak age groups where they kill people, and a different prognosis dependent upon age. Many elderly die whilst carrying a cancer, that due to their age is sufficiently slow growing that it is expected that another cause will kill them before the cancer becomes a concern. If an 85 year old man with a slow growing prostate cancer dies of a MCI, how much reduction in life expectancy do we ascribe to the heart attack? If a 30 year old who has smoked a pack a day since mid-teens is looking a reduction in life expectancy how do we fold together x% increase risk of lung cancer by 50, y% increased risk of heart disease by 40, z% increased risk of stroke by 60, and the likelihood of spending his 70’s coughing his lungs out with emphysema? You can fold the numbers together and come up with a simple average, but in doing so you have lost so much information that the resultant number is not useful in comparison with other life estimate averages.