How did "big board" strategic combat displays work?

Thisis an example of what I am talking about. Dr. Strangelove and other films have a movie prop version of this, such as in this iconic scene.

So the question is, how is this accomplished? The problem with hardwired light bulbs in the Strangelove scene is that it is very inflexible. The bombers may take a different route. There may be varying numbers of bombers. The enemy bomber tracks are unknown when someone wired up the board. And so on.

They obviously did not have the modern version, where you just set up a computer projector or use a bunch of flat panel monitors to render the output of the computer directly, so how *did *they do it?

I have no experience with such displays in a military context, but I did a lot of A/V work in the 60s and rear-projection screens are surprisingly effective for such purposes. Maps can be projected from film or glass and can be scrolled and zoomed quite easily. Then objects, including shapes, images, and highlights, can be added using very simple stage lights with drop-in cels. The added objects can even be rotated if you want the object to appear to turn and “return to base.”

Of course, most of this was done manually where I worked, but there’s no reason it can’t be motorized and controlled in a variety of ways. It’s not really very high-tech.

Just think of how simple it would be if you were using a front-screen projection set-up.

[URL=“JAMES STEWART'S BALLISTIC MISSILE EARLY WARNING SYSTEM FILM "AEROSPACE COMMUNICATIONS" 34102 - YouTube”]…They obviously did not have the modern version, where you just set up a computer projector or use a bunch of flat panel monitors to render the output of the computer directly, so how *did *they do it?

There are two key elements: (1) Computer technology to provide the graphics/text, and (2) Large-screen display technology.

Computer technology to produce moving vector graphics existed in the 1950s. Dynamic, real-time calculation and display using vector-graphics was demonstrated in 1961 in the first video game SpaceWar, running on a DEC PDP-1: Spacewar! on the Computer History Museum PDP-1 - YouTube

The mix of vector graphics plus early large screen projection technology (possibly oil-film light valve, or OFLV) can be seen at 00:52 and 02:25 in this old Air Force video: IBM Sage Computer Ad, 1960 - YouTube

Some of the static elements like terrain outlines were overlaid transparent slides. The dynamic elements such as numbers, moving plot points, etc. were computer-generated. 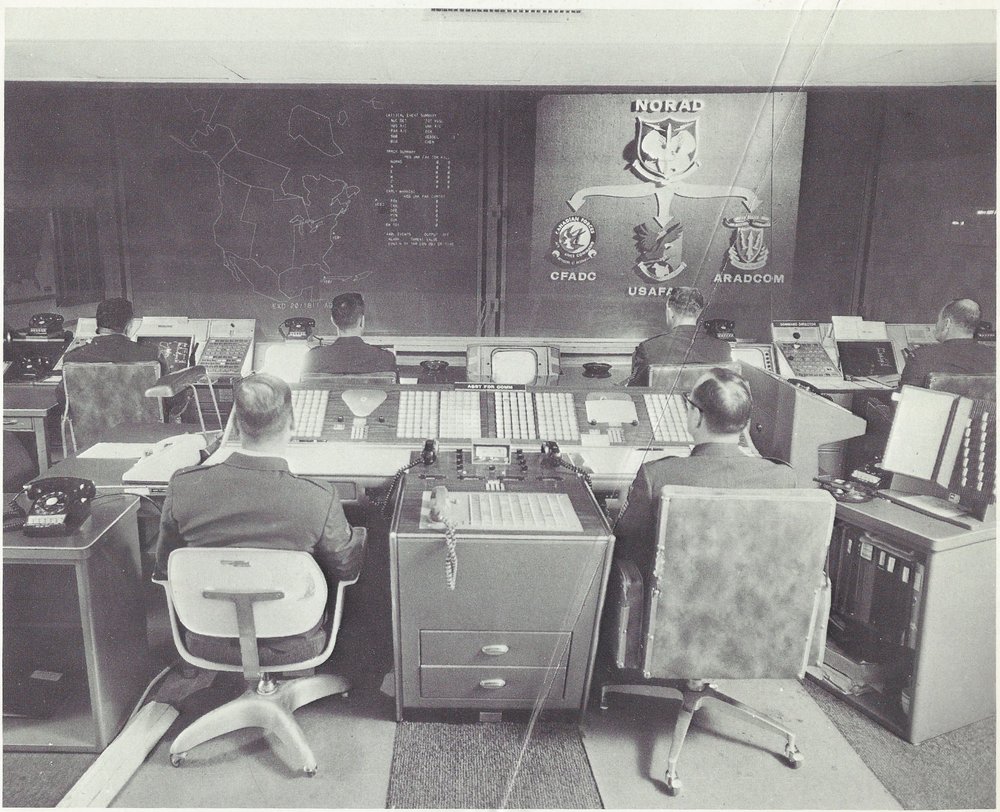 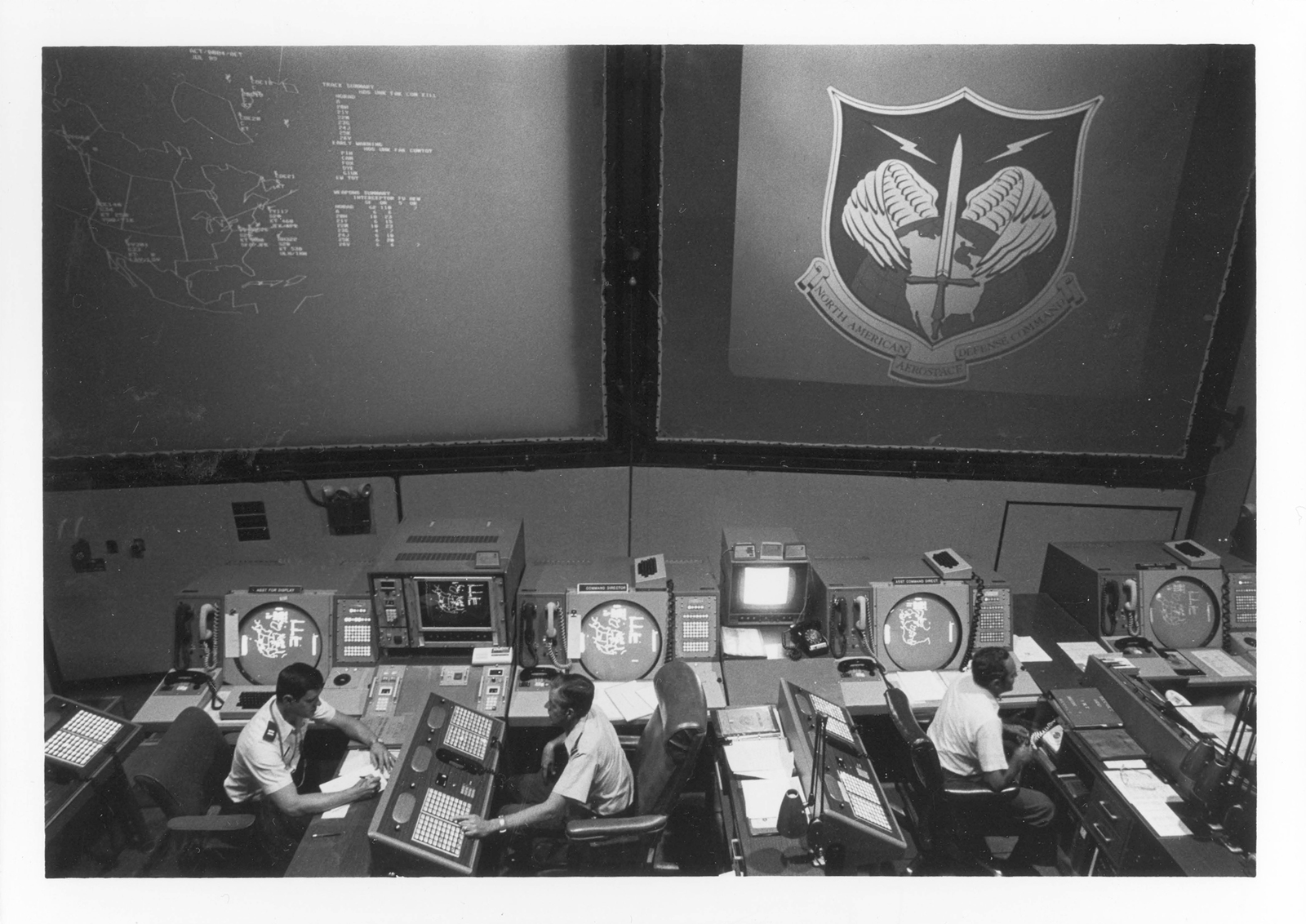 OFLV display technology was invented in 1944. The brand name for those commonly used in the 1960s was Eidophor. They cost about $1 million each in 1960s dollars (about $7.7 million each in 2017 dollars): https://en.wikipedia.org/wiki/Eidophor

Before that, people just pushed coded blocks around on a gigantic table map, or moved pins on a wall map.

All I know, is that I’ve read a number of times, that none of the fancy display systems in the big movies ever actually existed. At least not at the time the films said they did.

Similar to the fact that the infamous Red Phone, linking Moscow to Washington, wasn’t a real phone when it was at it’s most famous.

One method for such displays is to have the map drawn on plexiglas and lighted from the edges. The map is drawn with colored grease pencils on the front. Then for tracking planes, there are people behind the map drawing the tracks as they move. Radar operators are talking with them and giving updates. Or for HQ, someone from a radar unit may be talking over the phone to the plotter.

All I know, is that I’ve read a number of times, that none of the fancy display systems in the big movies ever actually existed. At least not at the time the films said they did.
…

I think that’s better stated as “Movie display systems are often advanced ahead of the current systems actually deployed.”

The same situation is probably true today. A wall-sized grid of 27" LCD panels forming a complex graphics display system is bog standard stuff in the real world. OTOH, consider those swirling 3D quasi holographic things that let moviegoers see out the agent’s own eyes in real time from across the planet. Those’re still in the real world future even though they’re in last year’s movies.

The famous data fusion and display system of the period was SAGE. That said, the terminals in that Jimmy Stewart clip don’t seem to match the SAGE ones.

This Wikipedia page claims that the “big board” was created via “Operator displays were directly copied on 35 mm film which were projected on the board”, but that seems weirdly primitive.

The famous data fusion and display system of the period was SAGE.

Wow. So the interesting thing here is that how advanced it was. Reading about the lengths they went to for building the AN/FSQ-7 - that really is decades advanced of anything the civilian world had during that era. It also must have been at least partially secret at the time. And yes, they could have driven projectors with a monster like that, and presumably had some primitive form of graphics to show the tracks of detected aircraft.

Horrifically vulnerable, of course. As it mentions in the article - in practice, during training exercises, some of the bombers got through. And once the nukes started to go off, the system would have collapsed. That’s why the plan became “scare our enemies into not trying it” (because they can shoot right through our defenses)