How do these spinning balls work? 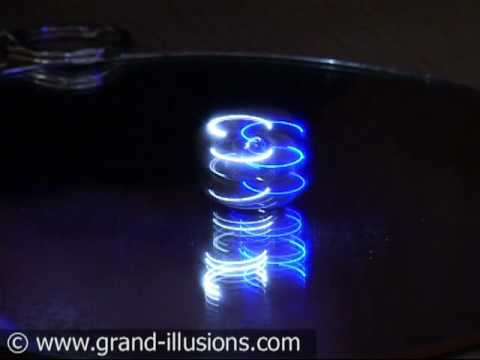 I want to say this is an illusion of some kind. After all, the youtube channel is called “Grand Illusions.” But a quick glance at other videos on the channel doesn’t seem to show that it’s actually dedicated to illusions per se. So I’m not sure.

What the video depicts is a man placing two ball bearings welded together onto a mirror surface, then spinning them, and by blowing on them, getting to spin extremely rapidly. Then he uses lights to create some neat effects.

But I can’t visualize how these ball bearings could be spinning like that. To rotate around their welding point, wouldn’t they need to be rolling in opposite directions? But they can’t be doing that, can they? because they’re welded together.

Or are the balls just sliding across the surface? But I mean, maybe I just don’t know something about ball bearings here, but shouldn’t friction slow them down a lot faster than allowing them to keep spinning for minutes at a time like this?

I don’t think they’re rotating around the weld point. I think one ball is spinning and the other is “orbiting” it.

wouldn’t they need to be rolling in opposite directions? But they can’t be doing that, can they? because they’re welded together.

Or are the balls just sliding across the surface? But I mean, maybe I just don’t know something about ball bearings here, but shouldn’t friction slow them down a lot faster than allowing them to keep spinning for minutes at a time like this?

Neither rolling nor sliding.

The are bouncing. So most of the time its only air to slow them down.
As they slow down, they hit the point they don’t bounce any more, and then they slow down from rapidly from there.
You can also see height and profile of the balls as the spin … the width becomes less, the height increases.

I was about to post that there’s vertical motion in the balls as well, not just horizontal, but you beat me to it. And I was going to say they seem to be spinning like a plate that rolls around on its rim when it’s dropped, in which case the friction would be neglibible. But I can’t see how two balls welded together would spin like that. And if they’re bouncing, I’d expect more noise.

Neat but $ 40.00 seems kind of pricey for 2 welded together ball bearings 3 little keychain LED lights and a straw.

so basically, they’re spinning like the Hammer Throw event in the Olympics?

Only one of them is in contact with the mirror at a time.

I was wondering at first if one of the bearings was much lighter than the other. I.e., it had been hollowed out. That would create helpful asymmetry that would allow the heavier bearing to be the main contact for spinning. Especially if the lighter one was slightly smaller in diameter.

But there doesn’t seem any difference between them as they stop spinning and roll together.

Only one of them is in contact with the mirror at a time.

In fact, Reply’s slow-motion video shows that one of them is consistently in contact with the mirror, and the other is consistently airborne. This seems to defy physics, since you would expect gravity to promptly pull the upper ball down. My guess is that the one in contact with the mirror makes the pair rotate on its long axis (between the two sphere centers), which results in gyroscopic precession somehow keeping the upper ball up off of the floor. Weird.

The video also belies Isilder’s claim that they bounce rather than roll or slide. There is clearly constant contact by one of the balls.

Another hypothesis: the contact bearing’s center of gravity is way off.

Looking at the first video, when the balls stop spinning, they roll a bit and then back. I thought at first this was due to the mirror being concave, but a bearing with a lopsided weight would also explain it.

Somehow, this off-center weighting causes the other bearing to lift off the surface.

In the slow motion video, the center of rotation appears fairly near the center point of the joint. So both should weigh about the same. Perhaps the 2nd one is also lopsided internally as well.

(A lot of magic tricks rely on hollowing out common objects like coins and putting them back together. So they have the tech for this.)

Another hypothesis: the contact bearing’s center of gravity is way off.

There are videos online showing people making them at home by simply gluing marbles or bearings together. One kid used two very powerful round magnets.

In fact, the one from the slow-motion video is itself just a couple of glued marbles.

Fascinating! Thanks for sharing.

$40 is more than I’d spend for the novelty … I think … gee they’d make a nice silly birthday present!

I don’t think they’re rotating around the weld point. I think one ball is spinning and the other is “orbiting” it.

Unless one is heavier than the other, I don’t think that can happen. They will spin around their common centre of mass - which, if they are identical spheres, will be the point of contact between them.

I’ve seen the same effect with Buckballs (little magnetic spheres), which my son and I play with all the time. If you place one on a tabletop then roll another quickly towards it, you can get them to attract enough so that they stick together and spin like crazy. And they don’t gradually come to a stop - they get slower, but then when they reach a critical point they suddenly stop.

My son asked why this is, and I guessed that when they’re spinning, only one of them is touching the tabletop. If both were touching, the friction force would have a large moment of inertia, and the balls would slow down quickly. And that’s what happens at the end - when the speed gets low enough that they both touch, they immediately stop.

Then a friend came over a couple of weeks ago, and I showed him this effect, and he pointed out that his new iPhone 5S had a slow-motion effect on the video camera, so we video’d it, and you could see on the video that only one ball was touching.

Now the question becomes - why does only one ball touch? My only answer is: it basically becomes a top, so why do tops balance when they’re spinning? I understand physics pretty well, but gyroscopes and tops are things that I would always just shrug about.

ETA: I looked around YouTube and found a video of them: http://www.youtube.com/watch?v=5LhaCe6A0Po
You can see how they suddenly come to a stop.

Unless one is heavier than the other, I don’t think that can happen. They will spin around their common centre of mass - which, if they are identical spheres, will be the point of contact between them.

Yeah, they spin like dumbells (around a common center.) But also they rotate around the axis through the balls, like a leaning-over top.

It’s easier to visualize if you have two plastic wheels glued to a plastic axle. Stand them on end and spin them like a top. The top starts to fall over, and starts precessing. But now the rim of the lower wheel is rolling against the floor! The wheels grind on the floor until their rotation speed matches the precession, and the lower wheel is in rolling contact with the floor (not grinding, just rolling.) As the pair of wheels tilts more and more, stored potential energy speeds them up as air friction slows them down. Because of this, they spin far, far longer than you’d expect. They’re being powered by a falling weight.

Actually this is an old physics trick that’s normally done using a very short piece of white plastic pipe (maybe 3cm dia, 6cm long.) Put some colored marks on the pipe, spin by flicking with fingers, and you see static colors, since their precessing and rotation makes the same surface flash by during each turn.

With polished silver supermag spheres, you’ll often notice two glowing rings in the blur of spinning balls. One is a reflection of overhead lamp from the higher ball, the other a reflection from the lower. Gravity is powering the spinning (the balls are precessing, tilted, and slowly laying down,) so as the upper ball approaches the floor, the two glowing rings come together. SO… if you watch the two glowing rings, you can predict when the balls will touch down and rapidly halt (a few seconds after the rings come together.)

I’ve only played with the supermagnet verision. The trick was around for years before it appeared as a toy on Grand Illusions. Two $3 neo magnet balls about a half inch diameter. Not $40!!!

This video shows that there is indeed rotation about the long axis, due to the lower ball rolling against the mirror on a circular path.

This video shows that there is indeed rotation about the long axis, due to the lower ball rolling against the mirror on a circular path.

It’s amazing to me that the ball that’s touching the flat surface is rolling, not sliding. So the whole thing is spinning around an axis that’s mostly its “flat” axis, while at the same time spinning around its long axis. I just don’t understand precession.