Turkey sandwiches are the entire reason for cooking a Thanksgiving turkey. I eat about two bites of turkey on Thanksgiving day, then its on to the sandwiches.

I’m doing turkey tenderloins this year, so they’ll get soaked in buttermilk overnight and then rolled in a mixture of cracked pepper, grated cheeses and panko crumbs. They’ll get drizzled with olive oil and then cooked hot and fast.

Another vote for the baking bag. I’ve used it many times and it produces a tender juicy turkey. As well as seasoned flour, I put 3-4 rashers of bacon on each side; maybe I’ll put a couple between the skin and breast meat this year.

I’m going to try something new this year. Since it’s just my brother and I to use up a large turkey (supermarket special free turkey when we bought a ham), I’m going to pre-cut the turkey into drumsticks, thighs, wings, split breast and back and roast it that way. Unless you want to make stuffing, it’s not engraved on stone tablets that the turkey has to be whole and it will make storing leftovers easier.

Depends on how motivated I am.

Done is defined as a remote thermometer in the breast reading 160.

Unmotivated. Herb butter under the skin on the breasts in the oven at 400 until done.

Slightly motivated. Herb butter and whatever seasonings sound good on the smoker at 225 with a pan of water for moisture. Usually a mix of hickory and cherry wood.

Most motivated. As above, but spatchcocked.

Agree that brining is too much effort for too little reward.

I’m going to try something new this year. Since it’s just my brother and I to use up a large turkey (supermarket special free turkey when we bought a ham), I’m going to pre-cut the turkey into drumsticks, thighs, wings, split breast and back and roast it that way. Unless you want to make stuffing, it’s not engraved on stone tablets that the turkey has to be whole and it will make storing leftovers easier.

Why cook all of it, then? Why not cook about as much as your will eat, and freeze the rest to cook fresh another night?

What part of the turkey is the tenderloin?

Preheat the oven up to 425 or so. Tent the breast. Shove the bird in the oven. After 15-20 minutes, turn the oven down to 325 and roast until done. Use the drippings for gravy. Tried and true for over 30 years.

The last 5 years or so I’ve been using the America’s Test Kitchen method, which is vey similar to above, but they go a step further. Put a pizza stone and the roasting pan in the oven to preheat. Then put the bird in the hot roasting pan, and onto the hot pizza stone in the oven.

The idea is to cook the dark meat faster than the white meat, so they’re both done at the same time, but the white meat is not over cooked.

I dry brine, which means I just rub a few tablespoons of salt in the frozen bird, and let it absorb as it thaws.

A roux based gravy from the pan drippings covers any mistakes.

What part of the turkey is the tenderloin

The turkey farm near us sells strips of turkey breast as tenderloins, marinated in various mixtures. Albuquerque Turkey is my favorite. I grill them year round

ETA: another cool turkey product are Turkey Ribs. Part of the shoulder girdle (coracoid?) is butchered with attached meat. Looks like a rib.

I’ve also gone to fresh free-range turkeys over the past 5 years or so, instead of frozen. They’re way more expensive, but I think the flavor is better. I used to buy Mary’s when we lived in Oregon, but MN is turkey central, so we buy from a local farm.

Anyone else here going to fry their turkey?

Thanks. So it’s just a strip of breast, and not the smaller breast muscle, closer to the rib, like the “chicken tender” is?

I sit across the table from him and, after a little small talk and chit-chat, I look him straight in the eye and say, in a calm tone, “Listen, I know you don’t want to hear this, but in a few minutes I’m going to kill you, and then I’m going to cook you and then eat you. So we can do this the easy way or the hard way. but there’s simply no way out of this for you, old friend.” Generally, they accept their fate, and set their necks on the chopping block for me. This is the most effective way I’ve found to prepare my turkey. 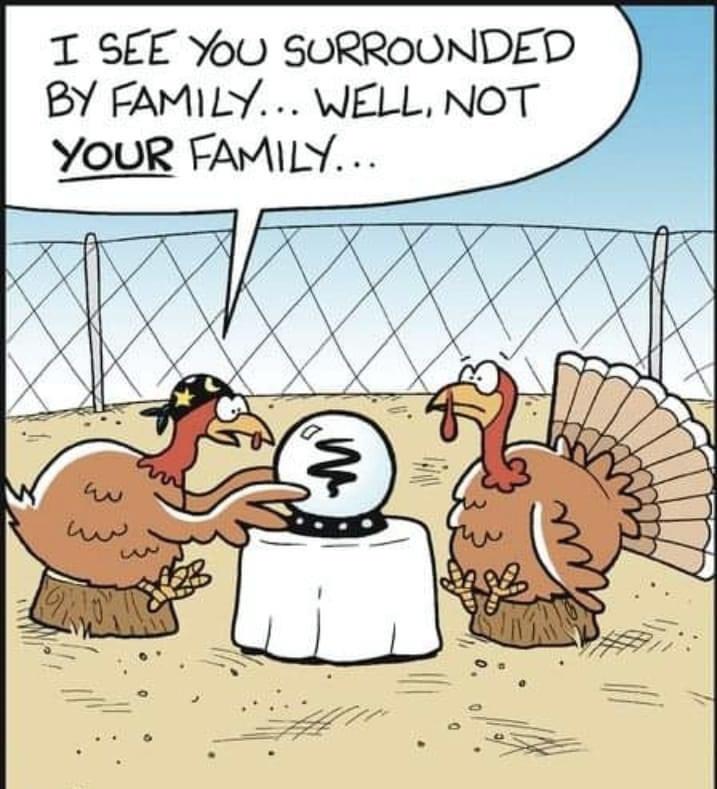 Anyone else here going to fry their turkey?

Never done it myself, and really don’t see the point. A lot of potential for disaster without much up-side. We went to someone’s house many years ago where they did that. When the guy lowered the bird into the boiling oil, it overflowed and went everywhere. It was outside in the yard and on a sheet of plywood, but the potential for hospitalization was high. Also, the bird wasn’t cooked all the way through when he was done.

We had 2 this year (had, as in, an early dinner yesterday because of out of town guests who have to leave Thursday morning.) I smoked one and roasted the other overnight. All I did for the smoked one was oil the skin, and I used apple wood in the smoker. It was YUMMMM!!

The roasted bird was also oiled, then I shook a bunch of poultry seasoning on it and in it. It sat on a rack suspended over a pan into which I dumped a bottle of white wine. Then I roasted it at 225° for 10 hours, followed by about 15 minutes at 350° to crisp the skin. It was also really good. Leftovers have been shared among 3 families.

I may get another one to smoke and freeze for future meals when turkey is harder to come by.

We get Xmas turkey here - we don’t do Thanksgiving - but I have long wanted a goose or a peacock instead. * A goose would be similar, a peacock would be much less fatty.

I can’t find either so I ordered 2 skinned/dressed rabbits, also pretty exotic here, but so tasty.

I’ve roasted spatchcock guineafowl for Xmas but they are not very exotic here, and they are really small birds once plucked.

So it’s just a strip of breast, and not the smaller breast muscle, closer to the rib, like the “chicken tender” is?

Hmmm, I think it is exactly like a chicken tender. The strip of meat was a description, but now I’m not sure.

ETA: they have cutlets and tenderloins.

At a previous job we used to get a frozen turkey the Monday of every Thanksgiving week. But since Mrs. solost’s parents hosted Thanksgiving and got their own turkey, I’d save mine to defrost and smoke at a later time. Smoked turkey is fantastic.

However, if I was doing Thanksgiving, I’d roast the turkey in the oven, traditional-like, so I had a lot of drippings left over to make turkey gravy. Can’t really smoke a turkey and do homemade gravy.

Can’t really smoke a turkey and do homemade gravy.

That’s also a problem with deep frying a turkey. My brother used to bring us a deep fried turkey, which my kids liked. But i ended up roasting a turkey, too, mostly so we could have gravy and stuffing.

Put it in the oven and brush on some oil or butter. Nothing else Is needed.

What part of the turkey is the tenderloin?

Tenderloins average in size between 8 ounces and one pound and can be used in just about any recipe that calls for using chicken breasts.

You can get chicken and duck versions too.