How does Facebook decide that I may want to be friends with someone?

Looking through my suggested friends I found people well within my monkeysphere who I had neglected to befriend because I’m rarely on Facebook. There were others I recognize and have common friends. That’s okay. But then there are the improbables, like the Head of Scripted at a division of ABC. I have only a couple friends with any connection to Hollywood, and they are not shared friends with her. Okay, she’s a beautiful blonde, too, but Facebook wouldn’t have picked up my interest in suchlike based on my other friends. I’m tempted to ask, as I’ve given up on not being seen as a creep. But I don’t not create TV shows and am now planning Broadway musicals I’ll never write.

Most everybody else I don’t know is a realtor. That I understand.

You may have mentioned an ABC show in a post, or commented on one in somebody else’s, or just Liked it. Or you may have left the Facebook page by clicking on a shortcut to an ABC show, which gets logged and mined.

Well, don’t ask her; she has absolutely no idea who you are, either.

Well, don’t ask her; she has absolutely no idea who you are, either.

I sent a friend request because I have no shame. At best, we’ll have a laugh and I’ll have another Hollywood contact I won’t use. At worst, she’ll have me arrested. What’s likely, she’ll ignore it.

But damn, what does it cost a realtor to spam people on Facebook?

Here’s another possible scenario, it’s happened to me.

I find myself thinking about some Jane Smith-Jones I knew 20-30-40 years ago, wondering where are they now, and I search their name on Facebook.

I get several possibilities, some which are not obviously wrong. So I open one of the Facebook pages and soon realize that this is not the Jane Smith-Jones I knew.

But Facebook will notice this activity and will suggest to this random Jane Smith-Jones that she might know me. Now she is probably thinking"what do I have in common with Ann Hedonia and why the hell does Facebook think I might know her?"

We have this thread every few months. Facebook (and other social media outlets) have several algorithms that they constantly tweek and update. They used all sorts of data including your friends lists, your groups and interests, external data mining, activities, searches, phone information (including calls and location data) to identify possible connections.

Well, possibly thanks to nosing around about me, she has friended my nutcase security guy. Hope springs eternal!

And the world’s favorite home theater designer, whose design for Dell left me no hope that I could make it sound good, so I settled for loud enough to make the huge Chihuly chandelier explode the first time he cranked it. TWO friends in common. I’m practically married to her!

ETA: (sigh) I remember when I had a career.

New question: Why did the announcement that she had friended a friend of mine come up on my page if she hasn’t friended me? And stalking through her friends, do I really want to befriend David “I’m a Pepper” Naughton and Dennis “Richie Brockelman” Dugan? Yeah, I remember the '70s.

I think Facebook should allow you to list your enemies. Then it could suggest new friends from the enemies or your enemies.

New question: Why did the announcement that she had friended a friend of mine come up on my page if she hasn’t friended me?

Because your friend had an event that might be of interest to you.

The funny thing is that I’d’ve probably forgotten about this if I hadn’t seen it. Now I’m [del]obsessed[/del] temporarily intrigued, and am remembering other scripts I never got around to writing. IIRC, her friend from The Asylum (Sharknado) is not my slight acquaintence from The Asylum.

So, going through another cull of my friends list I found the name of a woman I had worked with long-distance 10-15 years ago. She had a touch of cancer back then and I, the gentleman I am, sent the message, “You probably don’t remember me, but back then you were unwell. How are you doing now?” The unasked question being, “Are you still alive?”

She is, remembers my email address back then, called me thru FB, and asked how I came to be widowed.

We talked for about ten minutes, she volunteered that she has a boyfriend (I wasn’t about to ask, though she’s pretty and just barely appropriately aged), we agreed to keep in touch, and she solidified a place in my monkeysphere. That is a wonderful concept, monkeysphere, and it appeals to the Anthropologist I once trained to be.

In addition to surmising your “interests” based on what you personally post, FB can also do it even if you don’t post:

They use very sophisticated facial recognition software to not only recognize the people you post in your photos but they also other people’s photos you’re posted in. This is people both the foreground and caught in the background of those photos.

They don’t even need to see the face front on, they can also recognize people based on side views of faces. They’re also able to infer people’s emotions based on their photo and target ads based on the emotions it perceives you have. (You looked agitated, how about trying Zanax…)

Example: You’re at the Long Island Homeless Animal charity dinner, even if you don’t post something on this, you appear in the background of someone else FB post picture: you must like animals, pets, charities, Long Island charities etc etc, You may also want to connect with Person X, Y, Z who also attended this event etc. Even further: Person X shares a bunch of similar interests as you but you’re not “friends” with these 3 interests they are, FB will suggest those to you as well. 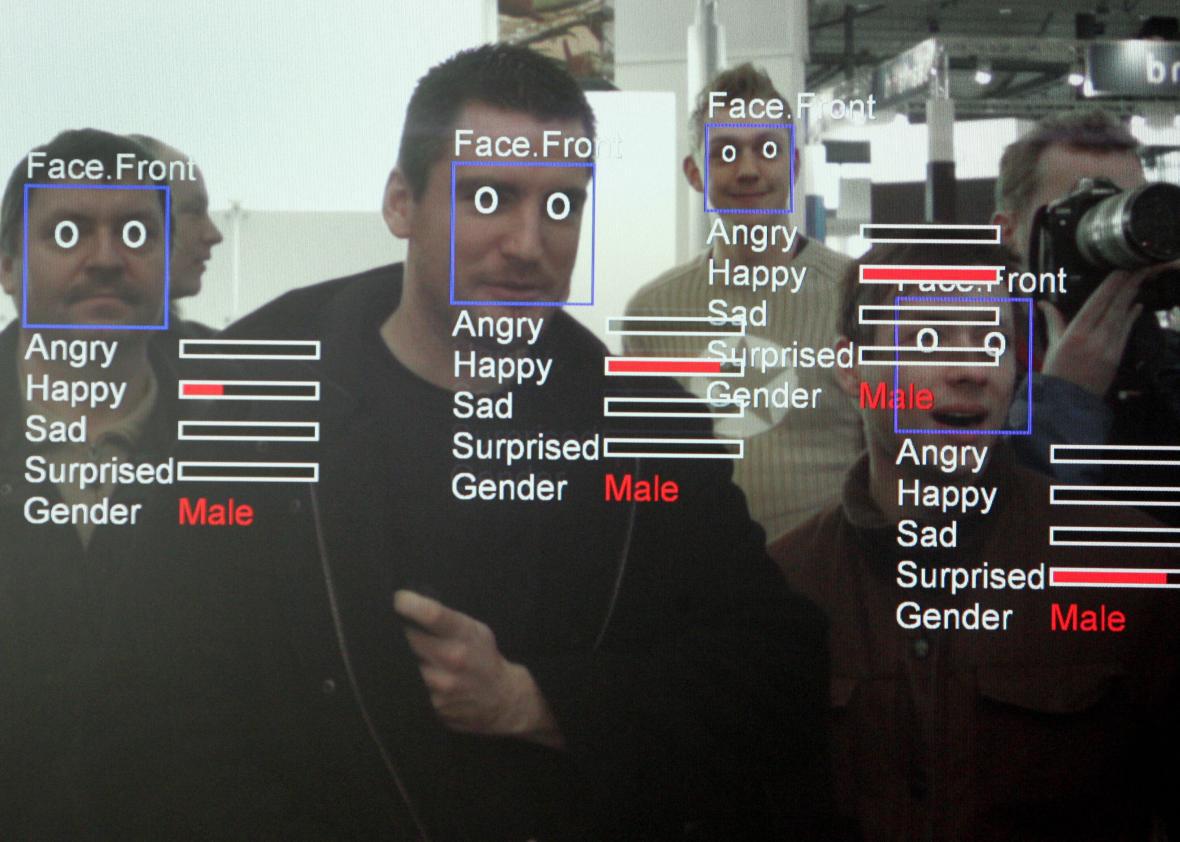 Facebook Is Using an “NRA Approach” to Defend Its Creepy Facial Recognition...

Facebook likely has the largest name to face database in the world.

This may not be the case with the ABC woman you mention, unless you unknowingly attended a party or event she was at.

Alternatively, although you assume you’re connecting to her personal page, it may be an official PR page related to ABC entertainment (that posts “teasers” about new show plots). Maybe people with similar interests to you (they like the same TV shows which she is involved with) have followed her on Facebook, so it’s algorithm is “guessing” you might like her as well. Same way IMBD & iTunes recommends movies or songs.