How does Oxygen launch a rocket?

When I was looking up the Shenzhou rocket the Chinese used, I read it used liquid nitrogen (so did the Russian and American chemical rockets). How does that work?

I gather oxygen is what fuels fire (I’m not hopeless). Presumably, that reaction is what pushes the rocket upwards into space. Can I get some answers that are more detailed than that please?

I don’t think that they use liquid nitrogen.

All the rocket engines use liquid nitrogen tetroxide and hydrazine propellants, not the more powerful but troublesome liquid hydrogen fuel used by the main engines of NASA’s space shuttle. 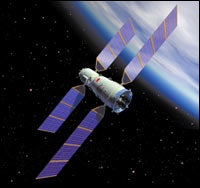 By boosting astronauts into orbit, China hopes to become the newest superpower in space

When I was looking up the Shenzhou rocket the Chinese used, I read it used liquid nitrogen (so did the Russian and American chemical rockets). How does that work?

Liquid oxygen. :smack: Unless I’m mistaken and they don’t use that either.

Believe it or not, the hardest part of space exploration is getting a spaceship off the ground. Explore the basics of propulsion and learn about both solid-fuel and liquid-fuel rocket engines.

Hydrazine is pretty much the nastiest fuel on earth, by the way. It’s a safe bet that many people in the Chinese space program have or will die from exposure to it.

We’re usually taught that you need three things to get a fire going: fuel, air and high temperature. More generally, you need two chemicals which, when they react, produce heat (“fuel” and “oxydizer”, e.g. kerosene and oxygen), and a high enough temperature to start this reaction. Rocket engines work just the same. You mix two chemicals in a combustion chamber and ignite it. The hot gas made by the reaction rushes out of the nozzle, pushing the rocket up.

As you can see on the link above, the highest performance fuel combination is liquid hydrogen and liquid oxygen. Many earlier rockets used kerosene and liquid oxygen, which is somewhat easier to handle. But oxygen is not a liquid at room temperature, so it needs to be stored at low temperature which complicates the design of the rocket and engine.

The Chinese Long March CZ-2E rocket used for the manned flight uses N2O4/UDMH (nitrogen tetroxide and unsymmetrical dimethylhydrazine). These are very convenient chemicals to use because unlike liquid oxygen and hydrogen, they are liquid at room temperature. The Titan rocket (US) uses the same fuel. A similar fuel (N2O4 and monomethylhydrazine) is used for orbital maneuvering by almost all satellites, including the Space Shuttle. Unfortunately, both N2O4 and hydrazine are toxic chemicals, but for some applications there’s no alternative.