How easy would it be to manufacture knotted rubber bands? (Or Moebius strips?)

I don’t think they’d sell particularly well, but I at least would like some for my own amusement and to play with the minds of my co-workers. We still have paper files for each client (though many of them contain absolutely nothing but instructions for the preparer/reviewer and are mainly physically just used to track who is supposed to be working on it), each file has a rubber band on it, and sometimes more than one if there’s a lot of stuff in it. I would like to be able to make a rubber band whose length is twice (or three times) as long as regular one, but the topology of it is not the unknot, but is some nontrivial knot. (I would like to note that Wikipedia pages with parentheses in them now link fine without modification. Yay Discourse!)

I just watched a video that shows the process of manufacturing them, and it basically involves forming the rubber into long tubes which are then cut into pieces to form the individual bands. This makes the mass production of them rather simple, but it doesn’t seem to offer any way to produce knotted bands very easily. It appears as though they are not cut until after they are vulcanized, but I’m not sure whether this is necessary, or whether the tubes can be cut before that and then tied individually and get the ends formed back together before vulcanization. Certainly more space would be needed in the vulcanization ovens since they wouldn’t be packed as tightly as they can be before they’re cut, especially since the knot would make them not easy to work with.

Another possibility is to use some sort of a mold that’s in the shape of a knotted loop. My spatial visualization is not great here, but I would think it to be possible to build a three dimensional object with a hole in the top in which a knotted loop would be formed apart from the bit that’s still sticking out the hole. I’m not sure if this can work though, as the process of getting them formed into tubes requires them to extrude a large mass of solid rubber, and trying to force it into small holes simply wouldn’t work. Maybe you could heat the rubber up enough so that it would flow like a liquid? I don’t know what kind of temperatures would be needed I can find information on casting rubber in molds, but I haven’t found anything as to whether the type of rubber poured into molds in this way would be suitable for rubber bands - the only results I find are about rubber bands used with molds, not using the molds for making rubber bands (and why would you unless you’re doing what I want to do?).

I assume that whatever works for making knots would also work for making Moebius strips as well, but I could be wrong there.

Anyone have any experience in this area they can share?

I just watched a video that shows the process of manufacturing them, and it basically involves forming the rubber into long tubes which are then cut into pieces to form the individual bands.

So I think if you just form the rubber into a large Klein Bottle, you can then slice that into Moebius strips.

So I think if you just form the rubber into a large Klein Bottle, you can then slice that into Moebius strips.

I assume you mean into a three dimensional projection of a Klein Bottle, but the question still remains how one would do that. It’s not as easy as putting bulk rubber through an extruder.

No, you have to start with a REAL Klein Bottle! (Implementing this in the required number of dimensions is left as an exercise for the reader. This is where the vaunted Yankee Ingenuity comes in.)

Klein bottle is after projective plane the “simplest” closed, non-orientable surface. It is well known fact that one can obtain it by gluing two Moebius strips over their common boundary. Although well known, that fact is not obvious.

Besides deformation there is an interesting realization of a Klein bottle as a tube around certain curve.

That wolfram page shows an animated gif of it happening too.

No, you have to start with a REAL Klein Bottle!

Yeah, that poses some new challenges.

You could injection mold them easily enough. Injection molds have inserts that can slide out to release pieces that would otherwise get caught due to their shape or topology. Or, you mold the knot flat, with the crossing strips touching, and then just cut that small portion later. Not quite as high volume as the traditional approach, but still pretty fast.

For very low volumes, you could 3D print them. Latex is a state of the art material as far as 3D printing is concerned, but there are other flexible materials available, like TPU. Wouldn’t work great as an actual rubber band, but flexible enough to be a fun toy at least.

Do you just want to make one or two at home? Mark the knot out on a small inner tube, then cut. Or cut a regular band, knot, and cement the ends…

Do you just want to make one or two at home?

I would prefer to be able to make them from the same rubber and in the same colors as the rest of the ones in the office. Failing that (which would require cooperation with the manufacturer I presume), I would like to make a large number without obvious defects to convince people that they were “real”. I’m well aware of things I could so to make some on my own, but I was more interested in wondering if there was an easy way to mass produce them.

Moulding them out of silicone is possible; not the same material as latex rubber bands, of course, but it could be coloured with pigments to be a close match.

I imagine the process for that would be something like:

I went to Amazon and entered “Moebius strip”, hoping that someone might have actually manufactured such things.

I went to Amazon and entered “Moebius strip”, hoping that someone might have actually manufactured such things.

Believe me, that’s the first thing I did as well when I wanted some. Well, not Amazon, because I don’t like shopping there, but just the internet in general, and they don’t seem to exist. With how much there is in various math geek merchandise, I wondered if it was due to difficulties in manufacturing.

I imagine the process for that would be something like:

But is this possible with the actual rubber used to make rubber bands? Failing that, would the silicone have the springiness associated with normal rubber bands to help keep file folders closed when being passed around in the office? If I can’t pass them off as regular rubber bands when people aren’t looking at their topology, that’s no good.

Probably not possible with regular latex rubber, at least not at hobby scale levels of engineering.

Two part silicone is available in a variety of different final consistencies, some of which are very similar in elasticity and general properties to rubber bands. Typically silicone is less ‘grippy’ on the surface than latex rubber.
With the proper application of pigments (like these ), it should be possible to make something that passes as a rubber band if people are examining it on its own. If it’s to be mixed in with ordinary rubber bands, that would be more difficult - if there is a regular rubber band for direct comparison, the small differences become more discernible.

Reasonably good description here, but no picture that I can see:
Real Möbius Gear Will Melt Your Mind

Video showing a good all around view of it, with just a few seconds showing it in action: 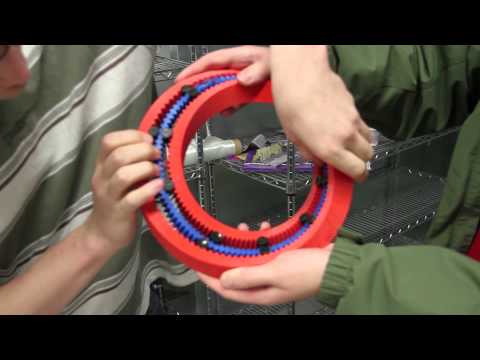 Another video showing more of it actually in action: 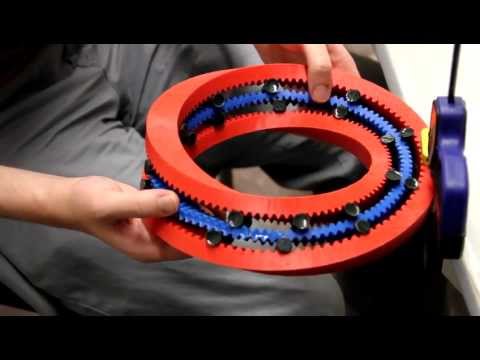 But wait! Look at this! Is there a life-size roller coaster like this yet? 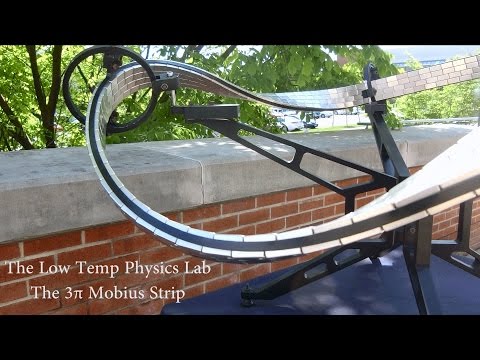 Martin Gardner showed a method in his Scientific American column many years ago. It is reprinted in his book Unexpected Hanging.

Here is a screen shot of the relevant page:

I already mentioned cutting up a inner tube, or you could use an O-ring and a twisting cut using a very sharp knife, but apparently it’s not so easy to mold something (e.g. a Möbius strip) out of liquid latex so that the final product looks store-bought? Even if I tried splitting a mere regular rubber band by hand, I’m not sure I could get the width completely uniform. If we are talking about mass production, though, I’m sure there are plenty of ways to get it looking seamless.

So perhaps the best way to manufacture a knot would not be one of the ways I suggested, but to cut a torus into pieces? I’ll have to investigate this further.

I’m not sure you’re going to find a seamless rubber torus though - even something like an innertube for one of those mini fatbikes is going to have a conspicuous join in it, and if there’s a join, you might as well try to make a feathered join in a regular rubber band.

Yeah, a bit of investigation shows that it’s not a solid torus they’re talking about, but the surface of one. Those would require a different manufacturing technique than forming a long solid but thin torus as shown in the video, and if you’re saying that the manufacturing of the actual products that are of that shape and topology requires joins, it’s probably not the route to go.