How is data physically held in computer memory?

I know that electric pulses or whatnot represent binary numbers in computers, but how is this physically accomplished in RAM or on disk?

Basically, a single-bit memory circuit, i.e. capable of storing one binary digit as 0 or 1, is a setup of two transistors. The circuit has two inputs: a pulse into one sets the output to “1”, where it stays until a pulse into the other input switches this to “0”. Put 8 of these in line and you have a byte, put 1024 bytestogether and you have a KB, etc.

Not sure about how it works on disc, though.

From what I remember from computer class (1984–when the Commodore 64 was the machine of the future):

The storage medium is composed of magnetic “switches.” Each switch has a magnetic state of ON or OFF which translates into 1 and 0 for purposes of binary computer language. I seem to remember each bubble being called a BIT–16 BITs to a BYTE.

All your programs are ultimately coded into binary from whatever program language you are using–so you enter your list of Pascal commands (which humans can readily understand), the program compiles/translates them into binary (which the computer understands), and when you save your list of commands as a file, it is saved as a file in binary format on the above described medium…all in 0s & 1s.

I also seem to remember that cosmic rays, small magnetic fields, gnomes, 1920’s style death rays, etc. can change the ON/OFF state of a BIT at random–which corrupts the program like a DNA mutation. To fix this, the BITs were/are arranged in clusters of 3 so that the computer can check for and correct for such errors, but the nature of that particular mechanism eludes me now.

'Course, it could all be different now. Microsoft has yet to patent 0s & 1s (contrary to Onion reports to the contrary.

OK
“static” RAM.
An individual bit 1 or 0 is held in an arrangement of transistors called a flip-flop which can be switched/flipped into two stable states. One represents 1 the other 0. To read the data you just measure what state the flip-flop is in, to write data you apply a voltage to one side or the other to switch it to that state.

“dynamic” RAM.
(If I remember right) Each bit is held as an electric charge which has to be refreshed before it drains away. The read/refresh cycle is built in. This uses fewer transistors per bit, so it’s cheaper than static RAM. Most of the memory in a PC will be dynamic RAM.

When the power goes for either type off all the information is lost.

On disc bits are stored as tiny regions of magnetised stuff (what is it guys?) sort of like video/audio tape and it’s written/read with something(s) resembling a stack of teeny-weeny tape deck heads.

Really important information is stored on post-it notes stuck to the sides of the monitor.

*Originally posted by Meta-Gumble *
**I know that electric pulses or whatnot represent binary numbers in computers, but how is this physically accomplished in RAM or on disk? **

The two technologies are very different. Here’s a decent page explaining the low-level operation of RAM. Roughly speaking, each bit is an assembly of several logic gates (NAND gates mostly, if I remember right) that collectively maintain a high or low voltage, which state can be read or written from the outside.

There are also two alternate technologies here: dynamic and static RAM. In dynamic RAM the bit states need to be refreshed repeatedly, otherwise they dissipate in a wash of electronic noise. In static RAM the bits maintain their state indefinitely, as long as the power is on.

In contrast, disk bits are represented by small magnetic particles on the disk media that can be oriented in either of two directions. The disk read-write head then has the ability to sense the direction as well as change it. Here’s a page that more or less explains the process.

As to which physical states, in either technology, represent which bit values, this of course is completely arbitrary. For example, I believe high voltage in RAM generally means “one”, and low means “zero”, but I don’t know for sure that that’s the universal convention.

You mean it isn’t stored as ripples in a mercury delay line anymore?

From How Stuff Works:

Flash memory is the essential component in solid-state hard disks and digital cameras. It retains data even when the power source is disconnected. Without this type of memory, you’d have to reload your data each time you shut down your computer. Learn all about the memory that never forgets. 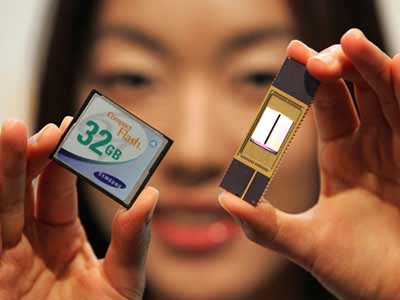 Unlike conventional hard drives, flash memory has no moving parts to break. And it can be used in smaller spaces, such as a pocket camera or cell phone. So why use anything else?

contrary to Onion reports to the contrary.

*Originally posted by minor7flat5 *
**You mean it isn’t stored as ripples in a mercury delay line anymore?

Heck no, we all upgraded to Core Memory years ago!

The first computer I programmed was a CDC 3300 with 96k of core memory!

*Originally posted by Fear Itself *
**Heck no, we all upgraded to Core Memory years ago!

Well I’m well past you guys, I’m on pen-and-paper…and backing it up takes no time when I scan it into my computer…

*Originally posted by Matchka *
The storage medium is composed of magnetic "switches."

Each switch has a magnetic state of ON or OFF which translates into 1 and 0 for purposes of binary computer language.

I seem to remember each bubble being called a BIT–16 BITs to a BYTE.

Silly me, I overlooked the Tinkertoy computer. If you’re using one of those, then the bits are represented by those little orange pegs with a green flag stuck in one end.

I seem to remember each bubble being called a BIT–16 BITs to a BYTE.

The number of bits in a byte is fixed for a given data processing system, and usually is eight.

The size of a word is architecture specific. 2 byte words were used by the 486s. I’m not sure if the current Intel chips even have a common word size, since the size of their commands can be anywhere from 3 to 20 something bytes.

So with the magnetic stuff, is a bit a physical particle on the disk surface? How is it read/ written?