How might Martian colonists arrange their calendar and keep time?

It’s also quite possible that the Martian colonists would use some new, Mars-based system for most purposes, but still structure their religious observances around Earthly time and calendars. We already, here on Earth, have calendars used solely for religious purposes, even as most of the religion’s adherents use the same calendars as atheists and infidels do.

As an aside, I’m sure that Heinlein had fun trolling the readers of Podkayne of Mars, whose title character is introduced as being “Nine years old, and about husband-high”. Because of course, 9 Martian years is 17 Earth years, a perfectly reasonable age of marriage in a frontier society.

At least during Martian night for most of the Martian year it’s easier to see Mecca from Mars than it is from, say, Medina.

For most of a Martian night, Earth is not visible. It might appear at sunrise or sunset, as Venus does on earth, but well before midnight, it will have set. At least it will be a crescent, though, when you can see it.

D’oh. Of course. Thanks for the correction.

I’d eyeballed the geometry of the POV from an outer planet looking inwards, thought about Earth vs Venus as an analog, and all the rest.

The cleverly decided that night was the time when you were looking up into the sky towards the center of your orbit. Not the opposite. So just substitute “day” for “night” in my post and it’s geometrically correct.

I think it’s implausible that the second will ever change without all of human civilization collapsing.

One could have a Martian hour that’s different from an Earth hour. Round it to 3690 seconds, or 61.5 minutes. It’s close to the right value, though far enough off that you’ll also need a leap hour about every 62 days (not a big deal, given how we deal with DST today).

One could have a Martian minute instead, but that seems worse. The middle-ground of timing between minutes and hours seems like the least useful range, and therefore the best place for a break. Days that subdivide nicely are nice to have, as are seconds that match Earth seconds. But 30 minutes is still basically half of a 61.5-minute hour at the precision most people use it.

Just like the app on the front screen of my Android knows sunrise, sunset, day duration, solar altitude, etc., for wherever and whenever I happen to be. Or anywhere / anywhen else I’m interested in.

Which one do you use? I use LunaSolCal.

This time issue is fundamentally flawed, though. Mars itself is in an entirely different frame of reference relative to the Earth. To the putative Martians, it is of no consequence how many minutes their are in an hour or exactly how long a second is, as long as experiments can be measured with sufficient precision to yield useful results.

There is more than a minute of messaging signal transit between Earth and Mars: there is simply no way to synchronize reality between these two frames of reference, so how the putative Martians demarcate their day is of minimal consequence. Most communications between the two will be more like email (or IRC with brutal lag) than like skype, so timing between the two will not be very important.

Of course the definition of the second matters. You couldn’t even agree on a communications frequency without that.

Either there’s a separate “Martian second” that corresponds to a different number of cesium hyperfine transitions as the current second or there isn’t. Either way, you have to standardize on something or any kind of communication is impossible. In fact just about any scientific or engineering discipline is impossible unless they adhere to a common standard.

Abandoning a common second would cause too much confusion. But minutes, hours, and days aren’t SI units and already have wiggle room built into them (some minutes are 59 or 61 seconds already). That gives plenty of leeway for creating practical, local timebases without interfering with scientific or engineering uses.

I think it goes without saying that there is no effort to re-define a new SI second, which serves to define a precise interval of time. Why would there be, except to improve the precision? We might note that sooner, rather than later, even frequent leap seconds won’t cut it on Earth, either, so as far as there is a problem, it is not confined to Mars. 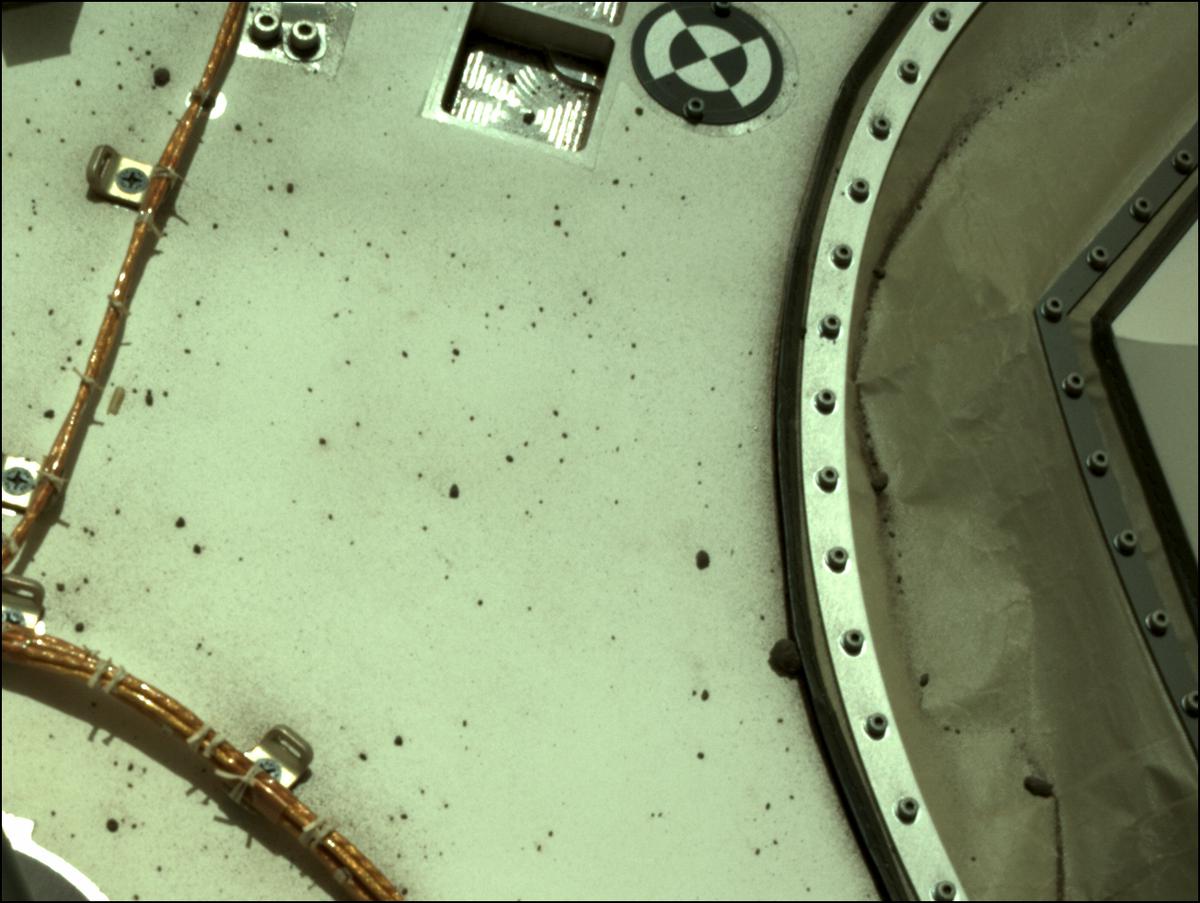 NASA’s Mars Perseverance rover acquired this image using its onboard Left Navigation Camera (Navcam). The camera is located high on the rover’s mast and aids in driving.

I have the sun on one page, the moon on the other. (With day/night wallpapers the icons “sort of” blend into.)

Very pretty, but way too fancy for me. I despise wallpapers.

My screen is a darkish neutral gray and the one LunaSolCal icon/link among all the other functional links has sunrise/set, moonrise/set and moon phase percentage. Set up for “here”, wherever here happens to be at the moment.

Cavete. I have noticed the occasional newspaper and even app miscalculate the times of rising/setting of the moon. Sunset was always OK; it’s harder to screw that up.

I think that putative Martians would easily adapt to two time scales, just as British people have become bilingual with metric/imperial.

It would be nonsense on any planet to define a day as any different to the time between sunrise and sunset. Years would be related to the orbit time around the local star.

The base unit - the second - would be conveniently left as a standard, just as most of the other SI units would. What will it matter how many (SI) seconds there are in a local year or day and other subdivisions (weeks/months) can be adapted to whatever seems appropriate.

Religious folk may want to synchronise their festivals with the original Earth calendar (as amended) but Australians happily celebrate Christmas in midsummer, so why would that be a problem on Mars?

I imagine that portable timepieces would mostly show local times and dates, but able to display Earth time/date on request.

Mars is going to have two specific units they’d need to wield given their planet, their much longer year and their slightly longer day. I actually think that the second, given how every smaller unit is metric divisions, would persist on Mars.

The Martian Moons might actually form a basis of some kind of hour equivalent. With a 7 hour and 40 minute orbit, Phobos makes a bit over three orbits per Martian day. (Mars’ other moon, Deimos, isn’t particularly bright).

That said, my hunch is that the Metric system fills in the gaps. 1,000 seconds is around 16 minutes, 1 Million seconds is roughly 11 1/2 days. So we’d measure time something like this:

This is assuming that we don’t have some kind of extrapolated Terrestrial time we’d try to use on Mars itself. We probably wouldn’t do time zones, etc, on Mars, instead, we’d just be able to figure out what time people are awake / sleeping with everyday technology.

Clocks could directly count to a million for timekeeping.
This also has the useful implications that time could be monitored by using radioactive cesium to keep accurate time without having to reinvent the clock.

Interesting but wouldn’t that mean that lunch was at a different time every day? Or do the seconds reset at the start of each Martian day?

This would cause Martian time to be off from Earth time but there’s no getting around that. Just have two clocks in the habitat marked HERE and THERE.

In short, everything that would be required to facilitate normal agriculture on the surface of Mars using the marginal amount of sunlight would be a fantastical logistical and technical challenge.

The difficulty in maintaining any sort of permanent presence on Mars is so often wildly underestimated. Imagine how hard it’d be to grow crops on the top of Mount Everest, if Mount Everest was not in the Himalayas, but somewhere in the Antarctic wastes. Mars would be a hundred times harder than that.

I guess the issues is that 2pm on Mars would be different in regards to Earth every day.

I guess the issues is that 2pm on Mars would be different in regards to Earth every day.

I like the two clock approach here. You can’t avoid a difference somewhere, and for the sake of the Martian folks aligning their clock to the sol would just make their life easier.

This would cause Martian time to be off from Earth time but there’s no getting around that. Just have two clocks in the habitat marked HERE and THERE.

This recurring imperialist insinuation that Martian time should be subordinate to, or even somehow related to, “Earth time” (i.e. New Delhi?), even as missions controlled from Earth never kept time that way, is the reason why so many Martians still want to blow up the Earth.

This recurring imperialist insinuation that Martian time should be subordinate to, or even somehow related to, “Earth time” (i.e. New Delhi?), even as missions controlled from Earth never kept time that way, is the reason why so many Martians still want to blow up the Earth.

But until they recover the Illudium Q-36 Explosive Space Modulator , they’re out of luck, aren’t they?

Come to think of it, Mars is a doddle. How do you want to keep time on Venus? A regular sidereal day is nearly 21 million seconds (243 Earth days–backwards!!), and the synodic day does not help you very much since it is still nearly 117 Earth days long.

Perhaps you could keep a weird Venereal calendar using some combination of years, solar days, and sidereal days (not that you can see any stars from the surface), and just eat dinner when you are hungry…