How much can a commercial airliner withstand

I’ve just seen a trailer for a new movie staring Denzel Washington as an airline pilot that successfully crash lands a plane after some sort of fault/failure.

You see him essentially roll the plane on its back, presumably prior to righting it for a crash-landing.

Could a commercial airliner actually achieve that without coming apart? and for bonus points, it seemed to be pretty low when it did roll, could it actually pull off a roll - I was under the impression with big jets like that once they lost lift, ie being halfway through the roll, that was pretty much a death sentence on the jet. 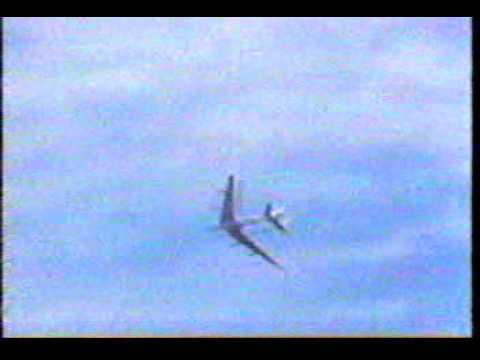 Cecil’s column: Is it possible to loop or roll a 747 jet?

Dear Cecil: Is it possible to roll or loop a 747 or DC-10 loaded or empty? I have a bet with my roommate and he says the wings would shear off. I say it could because otherwise they wouldn't allow...

There are different types of rolls. In the youtube video Tex Johnson talks about that particular type being a 1g maneuver all the way through it. I recall a commercial 747 (I think) that had some sort of trouble, and as the pilot did what he could to get it back under control he ended up rolling it, and losing quite a bit of altitude in the process. I can’t find a cite for it now though. The plane did land safely, IIRC.

Yes you can roll a large jet but only under the right circumstances. Of note, Tex Johnson was incorrect when he says it’s a 1g manoeuvre. It can be positive g all the way around (which is what he means I think) but it can’t be static 1g, the laws of physics don’t allow that.

In the trailer it looks like the aim is to roll inverted and then push the nose up (Capt Denzel says “trim nose down!” this would help recover from the dive if he rolled inverted first.) This is all kinds of wrong, the g forces an airliner can tolerate are pretty low. Typical limits are 0 - 2g with flaps extended and -1 - 2.5g with flaps up. You could possibly double the g before things actually start to break up but that still doesn’t give you much to play with. It certainly allows for a normal roll as the g forces will be positive and 2.5g would be enough to do a lazy barrel roll, but the negative g limits are very low. -1g is only enough to allow straight and level flight inverted, to recover from a dive while inverted you’d have to do -3 to -4g, the faster you’re going and the steeper the dive, the more negative g you’d have to do. I think wings would be snapping well before they got anywhere close to recovering from the dive.

There was an aerobatic pilot who had a wing start to fold up while he was doing aerobatics. He managed to roll inverted which reversed the forces on the wing and locked it back into position. He then flew an inverted circuit and landing, rolling upright just prior to touch down. You can do things like that in a purpose built machine, in an airliner, not so much.

I read an interesting white paper on a B52 crash in Washington state during a practice flight for an airshow. The pilot, a Lt. Col, frequently pushed the B52 outside of it’s operating envelope much to the dismay of his superiors. He claimed he would be the first pilot to roll the large bomber. He lost control in a very steep turn and clipped the ground with a wingtip killing himself and the crew. Here is a you tube video of the crash. Note: This is very graphic so you can cut and paste the link if you’re interested. [http://www.youtube.com/watch?v=tKwgvNDX1g4 (remove the beginning bracket, I didn’t want the link clickable)

I’d say that the design of the control surfaces and their ability to control the aircraft would be the criteria that determined whether a large jet could do a controlled roll.

I’d say that the design of the control surfaces and their ability to control the aircraft would be the criteria that determined whether a large jet could do a controlled roll.

Not really. There is nothing that happens during a roll that makes control any more difficult at any point. If the aeroplane can roll through 30º then it can roll through 360º. The main issue is the g loading the aeroplane is designed for and the roll rate it can achieve (maybe that’s what you were thinking of). If you want to avoid negative g stresses, and you should because the limits are much lower for negative gs, then you need to start the roll with the nose well up above the horizon and allow the nose to drop through the horizon as you roll. Do this right and you’ll keep slight positive g loading throughout the roll. The issue is that the slower the roll rate, the more the nose will drop and therefore the higher the nose needs to be to start with and the lower it will end up at the finish. Initiating the pull-up prior to rolling and pulling out of the subsequent dive is where the g forces necessarily exceed 1g. It shouldn’t be an issue to keep the forces below 2.5g though.

I have, for a long time, wanted to try it in a simulator but the simulator time is always taken up doing serious stuff. Also the simulator is supposed to be treated like a real aeroplane so I’d feel like I was being a bad boy.

Alaska Airlines Flight 261, an MD-83 (minus the Hollywood winglets), unfortunately flew in an eerily-similar inverted configuration for over a minute prior to crashing into the Pacific Ocean. The crew could not maintain control of the aircraft due to the loss of the horizontal stabilizer (caused by the failure of the jackscrew assembly threads), but it did remain intact during the dive until impact. In fact, the pilots believed they had somewhat better control of the aircraft when it was inverted; about 20 seconds before impact the captain stated “gotta get it over again……at least upside down we’re flyin.”

I read an interesting white paper on a B52 crash in Washington state during a practice flight for an airshow.

Was it Darker Shades of Blue? That was an extremely interesting read. Bud Holland (the pilot who crashed the plane) was an asshole with a long history of breaking flight rules by doing dangerous stuff with the B-52 (like these extremely low high-speed passes), and his commanding officers pretty much failed everyone involved by not taking him out of the cockpit long before that crash.

I recently read a book on accidents and disasters that discussed an unusual case in which a DC-4 propeller airliner suddenly went nose-down and dived into the ground. The crash was actually observed by members of the Civil Aeronautics Board (nearby, in a small plane in the airport’s holding pattern). 53 people were killed.

Months later, another DC-4 suddenly went nose-down violently, and actually flew into an inverted loop. Spectacularly, the co-pilot was able to regain control and roll out of the loop at 350-400 feet after 3 of the 4 engines stopped providing thrust (because unbelted people in the cockpit fell toward the ceiling and struck the prop-feathering controls with their heads). It turned out to be the result of deliberate interference by one of the crew – the book I read portrayed it as “experimentation,” but this site calls it a prank:

As a prank, a captain riding in the jump seat engaged the gust lock in flight. The command pilot, not knowing the gust lock had been engaged, rolled the elevator trim tab with no response. When the jump seat captain disengaged the gust lock, the aircraft went into into a steep dive, executed part of an outside roll and become inverted. Neither the command nor jump seat captain had seat belts on and they accidentally feathered No. 1, 2 and 4 engines when they hit the controls with their heads. No one realized it at the time but the feathering reduced power and allowed the co-pilot, who was strapped in, to pull out of the dive 350 feet from the ground.

So it is, apparently, possible sometimes to fly airliners into extreme maneuvers and survive.

There has been speculation that the earlier fatal DC-4 crash (EA 605) had also been the result of the gust lock having been engaged in flight, and the book I read speculated that the non-fatal inverted loop was not a prank per se, but that after much talk among pilots as to whether the gust lock could have caused the earlier crash, someone finally tested it in person.

Pilots generally don’t seem to have forgiven him for this – I found several sites that recount the story of this 1947 mishap with fresh anger, one of them containing a 2005 update. Some people never forgot Capt. Sisto’s “prank.”

Here is a you tube video of the crash. Note: This is very graphic so you can cut and paste the link if you’re interested. [http://www.youtube.com/watch?v=tKwgvNDX1g4 (remove the beginning bracket, I didn’t want the link clickable)

Off topic:
I’m not trying to sound disappointed, but I don’t see how this video is “very graphic”. It’s a plane hitting the ground and exploding. You don’t see limbs flying through the air or charred corpses or anything. It’s sad to be sure, but “very graphic”? No.

Off topic:
I’m not trying to sound disappointed, but I don’t see how this video is “very graphic”. It’s a plane hitting the ground and exploding. You don’t see limbs flying through the air or charred corpses or anything. It’s sad to be sure, but “very graphic”? No.

You’re right, no blood/guts, but some people (my dad is one of them) have difficulty viewing footage in which people are cognitively understood to have died, even if the fatal injuries are not visibly obvious in the footage. This video fits the description: the cockpit crew were all killed in the crash.