In a TV show I watch, a plot point revolved around the provenance of a family’s “treasured family heirloom.” A man claimed to have in possession a sketch of Mickey Mouse, hand-drawn by Walt Disney. The man claims that his great-grandfather picked up a hitchhiker outside Modesto one night in the early 1920’s, and the hitchhiker, lacking money, thanked his driver by sketching a cartoon for him. The man was Walt Disney, and the sketch was an early version of Mickey Mouse.

Although in the show the question of whether or not the sketch was a real Disney was a plot point, assume for this thought experiment that it could verifiably be proved, by an art historian or assessor or whatever, that the sketch was real. It is framed and in near-mint condition, drawn on the back of a diner napkin, which was itself approximately 155 square centimeters.

So what would such a thing be worth? I’m guessing that, sentimentally, it would be priceless. But from an art collection standpoint it wouldn’t be worth more than a few hundred bucks.

Any art collectors/historians/assessors want to correct me?

*ETA: I chose 1923 as the approximate year because that is when Walt Disney moved from Kansas City to California. Whether or not he ever hitchhiked outside of Modesto I’ll just leave to the imagination.

It would have been Mortimer Mouse then. From this auction website I think that it would probably worth $8k+.

Since this involves speculation about the value of a hypothetical work of art, it’s better suited to Cafe Society.

And most of that is just his signature. If you had an early version of Mickey Mouse - one that filled in the evolution from Oswald to Mortimer to Mickey, that could be verified and was signed, it would be worth a lot more than a few thousand bucks.

Heck, I have a handpainted cel from a lesser known Disney movie that Disney didn’t even touch that’s worth a few thousand bucks.

A lot of the unsold stock on those pages is heavily discounted now. Hard to tell what people actually paid for the sold items.

I have an original off-color cartoon by Will Eisner. It’s got corrections on it and even some other small sketches. But it’s not particularly valuable. I just like it and hell, it’s Eisner.

Trying to get some Ditko or Kirby, now. That’s hard.

Interesting thing – Disney, although he said that he invented Mickey Mouse, wasn’t really the artist behind him. There’s film of him drawing Mickey – but his drawing doesn’t look an awful lot like the Mickey we know – even from the earliest days. Ub Iwerks is generally held to be the guy who really designed and drew Mickey:

While it’s fair to question Disney’s role in making the mouse, is it fair to say Iwerks was solely responsible? One thing we’re sure of is that Iwerks was almost completely responsible for the art and design of Mickey in the shorts he animated—and that he had drawn Oswald, the character Mickey is almost a blatant copy of. While Walt Disney may have helped conceptualize the character, or have even suggested a mouse, it is Iwerks who inevitably drew and designed Mickey. Disney, on the other hand, was busy putting into practice what he learned from Mintz, making good on his promise to own his characters.
…

According to one report, after hearing Walt regale an audience with how he had invented Mickey, a little girl asked him to draw his famous character, and, without a thought, he passed the job on to Iwerks. Ub Iwerks soon left Disney to start his own animation company, feeling he was underappreciated for his role at Disney’s studio. 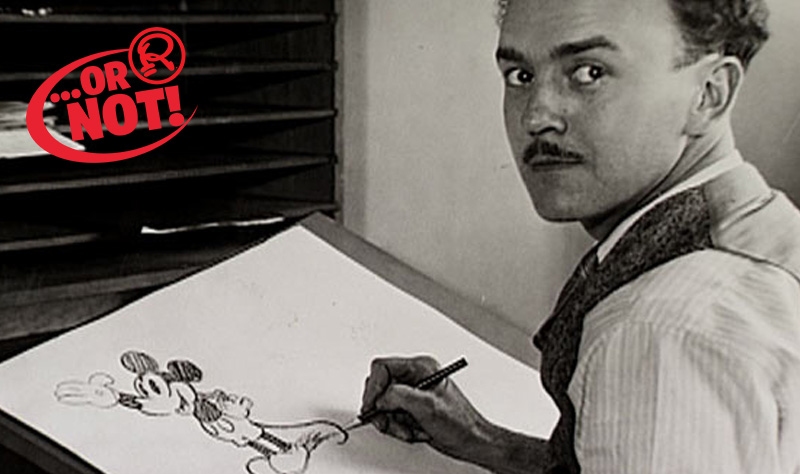 Ub Iwerks is attributed sporadically as a contributing creative force to the creation of Mickey, but he worked with Walt Disney long before the merry mouse.


Iwerks came back later, though. He invented the MultiPlane camera widely used in Disney productions, and so got credit for “Special Processes”, if nothing else.

So you could have a Walt Disney-drawn Mickey Mouse sketch, but it probably would look weirdly unlike Mickey.

Heck, Disney’s signature didn’t even look very much like the “Corporate” version of it.