How to Extend the Time Between Re-Fuelings?

People ask me questions. I don’t know the answers, so I ask you guys…

A customer asked me if it would hurt the car to fill the fuel tank so full that you could see the gasoline in the gas-cap flange of his vehicle. He wanted to extend the time between refueling as much as possible, for whatever reason.

They do this sort of thing in Nascar… but for street-legal rental cars?

What do you guys think?

I’ve read it can damage the car’s vapor recovery system. If that happens, it can mess up the carbon filter.

The dangers of overfilling your gas tank

Cooley explains why filling your gas tank to the first click is the smartest way to go.

If he wants to extend the time between refuelings, adding a couple extra pints to his filler neck isn’t going to help appreciably. And as @TheCuse says, may trash parts of his car.

If the driver really meant he wanted to go more miles between refuelings, tell him first he needs to learn to ask the question he actually wants the answer to. Then tell him he wants to learn about hypermiling..
.

I’ve read it can damage the car’s vapor recovery system. If that happens, it can mess up the carbon filter.

I used to own a motorcycle (BMW R1100RT), whose filler neck was designed to preserve a small bubble of air at the top of the tank; it was in this bubble of air space where the hose from the evap cannister came in. Some other owners chose to modify their tanks by drilling a small vent hole at the top of the filler neck, allowing them to put an extra few ounces of fuel into that air space. Many of them reported problems later: liquid fuel was getting all the way to the evap cannister and washing granules of charcoal down the hose to the left throttle body, manifesting as black crud showing up in the intake port,

The other problem this caused was when owners refueled their modified bikes and then rode a short distance home and parked. The fuel would expand, and with no air bubble at the top, the liquid would go to the canister…and then out the vent line to the floor of their garage.

In severe cases the vent hose could be blocked by these charcoal granules, resulting in an inability of the tank to relieve pressure or vacuum.

Note that these were problems that arose specifically because of aftermarket modifications; the bike was originally designed to protect itself against overfilling, and I would expect a car to likewise be designed to avoid those same kinds of problems.

FWIW, I just checked the owner’s manual of my cars for the refueling procedure. One says this:

Stop filling the tank after the fuel nozzle automatically clicks off. Do not try to ‘‘top off’’ the tank. This
leaves some room in the fuel tank for the fuel to expand with temperature changes.

The other says this:

Do not attempt to top off the fuel tank after the fuel pump nozzle shuts off automatically. Continued refueling may cause fuel overflow, resulting in fuel spray and possibly a fire.

I checked online for owner manuals of several other cars. They all instruct against overfilling, and some warn of overflow/spillage/fire as potential consequences. None warn of potential damage to the evaporative emissions recovery system.

As @LSLGuy observes, a couple of extra pints isn’t much; on a 15-gallon tank, that’s an extra three percent. Bigger gains can be had by changing one’s driving habits.

If you’re serious about extending time-between-refuelings, there are companies that make aftermarket fuel tanks to increase range. Titan makes replacement tanks that (somehow) fit where the old tank was, but have larger capacity. RDS makes auxiliary tanks which plumb into the vehicle’s existing system. These may only be for pickup trucks – I haven’t really researched their product lines beyond that.

As I’ve mentioned before, I have an auxiliary tank in my pickup that extends its range to about 2000 miles. Excluding long trips, I can go for months without refueling.

Obviously, this is only for a vehicle you own, not lease or rent.

If you’re serious about extending time-between-refuelings, there are companies that make aftermarket fuel tanks to increase range. Titan makes replacement tanks that (somehow) fit where the old tank was, but have larger capacity. RDS makes auxiliary tanks which plumb into the vehicle’s existing system. These may only be for pickup trucks – I haven’t really researched their product lines beyond that.

There is a biannual motorcycle endurance event called the Ironbutt Rally (rules PDF here), in which entrants typically ride something like 13,000 miles in eleven days. No doubt some speeding is involved, but a major factor is managing/minimizing your stopped time. It’s not uncommon for riders to equip their bikes with aux fuel tanks for these events. A BMW R1250 GS Adventure has a main tank capacity of almost eight gallons; add in a four-gallon aux tank, and you end up being able to go almost 500 miles between fuel stops. This doesn’t necessarily mean you stay in the saddle nonstop for 7+ hours; it just gives you more freedom to choose whether/when/where to stop.

I had a Ford E-150 van that after the “first click” (auto shutoff) would reliably accept about 4.8 gal - I consistently added this and experienced no problems over more than a quarter-million miles.

My current van is a Ford T-250, which will accept about 0.2 gal past the first click before overflowing. So I never top up.

Note that - at least in warm weather - you should not fill “to the brim” unless you plan to drive some distance immediately. If you park the car when very full, the gas that was at underground temperatures will warm and expand, often causing some to seep out.

I can’t argue that overfilling isn’t bad for the vehicle, simply because I don’t know.

Whenever I wonder if something is good/bad/acceptable for a car, my first inclination is to check the owner’s manual, which is usually pretty upfront about what’s bad. I can’t claim it’s harmless for all cars; it’s possible there are specific cars out there for which overfilling can damage the vapor recovery system, but in my brief search (see upthread) I didn’t find any.

Well, he certainly doesn’t want volatile gasoline running out of the top and onto the ground because that could be dangerous! Tell him to use, say, a cigarette lighter to shine some light in there so he can see when it is reaching the top.

Well, he certainly doesn’t want volatile gasoline running out of the top and onto the ground because that could be dangerous! Tell him to use, say, a cigarette lighter to shine some light in there so he can see when it is reaching the top -

Stick lighter. You can see way down the filler tube.

MY BMW 328 would consistently click off the gas hose about half-way. I found holding the handle up so the fill flowed down the side of the neck (I assume) made a difference. I assume this was a foaming issue. The vehicle does about 8 to 10km per litre with good highway driving, so I assume a 4km (2.6mi) drive home uses half a litre of gas - so no matter how full you get the tank, there will be a decent air gap once you get home. I’ve done this with assorted vehicles for 30 years and never had a fuel supply problem. Of more concern might be filling from a cool underground tank on a hot day - better use a decent amount of the gas before parking or expansion will push it out the cap. I’ve only seen this overflow issue once in my life, however.

Stick lighter. You can see way down the filler tube.

Not a good idea, but not as catastrophically dangerous as it sounds. The air outside the tank is too lean to burn, and the gaseous mixture inside the tank is too rich to burn. So if you bring an ignition source into the picture, you don’t get a massive explosion - you just get a small woof as the bit of combustible mixture near the car’s fender lights off, and then some smoldering as a little bit of gentle mixing takes place. This sometimes happens in winter when people start the fuel dispenser, get back into their cars, get out, and touch the dispenser, causing a discharge of static electricity that makes things kind of exciting. See for example this video, at 1:02 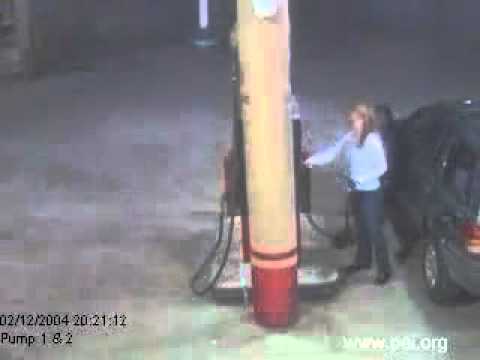 You might get some local burns, but you won’t get blown across the county.

(And if this ever happens to you, don’t move the dispenser like this lady did - just leave it in the filler neck, back away and tell the station attendant.)

So, it sounds like this friend either wants to travel a little further, or just wait a little longer, before he runs out of gas by running the tank dry. And the good reason to do that is what?

“Topping off” your gas tank, meaning trying to put more fuel in after the gas pump has automatically shut off, is also illegal in some areas. Mostly for environmental reasons, but it is bad for your car too.

I searched for but did not find which states prohibit this but I know Oregon does. If you ask the attendant to top off the tank they are not allowed to. Oregon has begun, finally, to allow you to pump your own gas in some areas, but there are signs on the pumps telling you not to top off. Unenforceable rule but there it is.

I had a car that could almost make it 3 trips to the place I had to go, That just short of making it was the annoying part, meaning I had to fill up every 2 trips instead of 3, which is 50% time spent filling up which is a lot. So I have been down this road trying to extend it just enough.

One way is to have the car on a slant while refueling, slanted away from the filler side, also possibly slanted down or up depending on the tank’s location relative to where you fill it. It’s not much in my experience but it could make a difference.

Bouncing the car also could help gas/air settle, but I have not noticed much difference.

I also ended up using a 5 gal can to just add a bit when i didn’t want to fill at the station and wanted that 3rd day.

During the fuel crisis in the 70’s there were ways to increase the tanks capacity by cutting the filler tube inside the tank. The filler tube extended a couple of inches from the top to preserve an air bubble, that could be shortened to get more fuel in. With modern vapor recovery systems I don’t think that would be a good idea anymore.

I had a Ford E-150 van that after the “first click” (auto shutoff) would reliably accept about 4.8 gal - I consistently added this and experienced no problems over more than a quarter-million miles…

I had that on a Ford Taurus where I could get an extra 4 gallons in, though I had to do it slowly.