Sometimes the news bleeds over into my local jazz station. Today the story was, scientists have discovered that human sperm swims in a corkscrew motion instead of zig-zagging from side to side. They’ve had it wrong for hundreds of years. The new breakthrough is said to be based on mathematical analysis of new 3-d microscopy. Apparently this opens up potential avenues of research for infertility treatment and other ciliopathies.

Without clicking on the link, it makes sense. A corkscrew path should increase the chances of finding the target.

It seems to me it’s just a more efficient way of moving than zigging and zagging.

They swim in reverse corkscrews in the southern hemisphere.

Making finding the girl of your dreams possessing a left hand thread problematic.

@penultima_thule you don’t happen to live in Nantucket, do you? 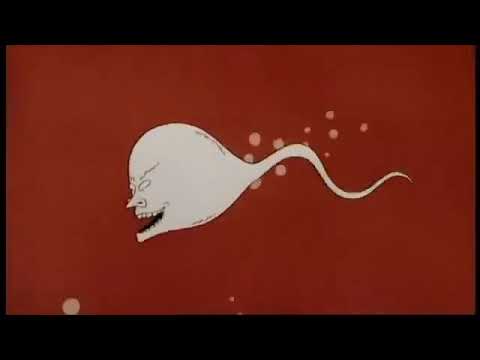 A shade over 10,000 miles away so in intergalactic terms, near neighbours.

When the first (and only) sperm penetrates the egg, there are literal (and I mean that literally) fireworks. Or electrical storms. Something like that. Teeny tiny, of course.

I heard it on BBC2 so it must be true.

There is an interesting observation from the world of fluid mechanics that may be operative here. At very low Reynolds number (which you’d have with the tiny velocities and dimensions of a sperm’s world), there can’t be any locomotion by motion with a single degree of freedom. For example, clams can move around a little by opening and closing their shells at the hinge, but that requires the Reynolds number to be high, not very tiny.

Do they turn right or left?

Have the “donors” been drinking before “hand”?

So a small sample size but left spinning sperm are about as outnumbered as left handed people are to right handed people. It couldn’t be could it???

I had the same thought. Two of thirty is 6⅔%, while lefties are 10%. It’s probably not it, but it’s worth looking into. IIRC, a genetic cause for left-handedness is suspected but nobody’s found anything specific.

there can’t be any locomotion by motion with a single degree of freedom.

What on earth does that mean? Can you 'splain, please?

OK, one degree of freedom means that something can change in exactly one way. The position of a train can only change along the track, for example. You can absolutely specify the location of a train by saying it’s 3 miles down that track. A boat on the ocean, on the other hand, can move in the north/south direction, and in the east/west direction, in any combination, so you need two numbers to specify how it moves, whether it’s in latitude and longitude, or how distant and in which direction, or whatever. An airplane needs three numbers, so altitude also. There are one, two, and three degrees of freedom involved in the positions of trains, boats, and airplanes, respectively.

Many animals have quite a few degrees of freedom available in their movements. We humans are able to move any of our joints, and, basically, every joint adds a degree of freedom (two for ball and socket joints like shoulders and hips). We have huge versatility in how we try to move around, and we can climb trees and crawl under things and swim and on and on.

A clam has one joint, or perhaps better a hinge. It can open and close. Clams do move by slowly opening and then rapidly closing. If they open slowly enough they don’t get dislodged, but if they close fast enough it’s quite a jet of water escaping them and they will shoot themselves hingeward.

The reason this works is that on the time and distance scale of clam closing, water moves mostly according to its inertia. There’s viscosity too, but the inertia is much more important. If we were talking about mud particles settling in a shallow puddle, this wouldn’t be the case, but it is for slamming clams.

This ratio of inertial forces to viscous forces is often a very substantial, yet simple, way of explaining how liquids and gasses move around. That is, this ratio is often important in fluid mechanics. Likewise explaining how objects move around in a liquid or gas, if the liquid or gas is important. When you are tightening a screw into wood, the fluid around the screw isn’t important. But if you’re a slamming clam, or a screwing sperm, it’s everything. The ratio is so important it has a name – Reynolds number – named after the man who invented beef bouillon. Within a given fluid, it’s proportional to the size of things and to the speed involved. For comparing different fluids you also have to consider their viscosity and density, too. Microscopic objects generally involve negligibly small Reynolds numbers.

If you wave your hand around in the water while swimming, the water in front of your hand crowds out of the way, but the water behind your hand swirls around in fantastically complex patterns. That is, your hand creates turbulence in its wake. The water motion is very unsymmetrical, just crowding out of the way in front and a big turbulent wake in back. This only happens at high Reynolds number. If you watch a river swiftly flowing around bridge piers you’ll see the same thing – upstream there is a bit of a hill in the water, and downstream it swirls madly.

If the Reynolds number is extremely low, on the other hand, the upstream and downstream sides look pretty identical. If you could picture streamlines, looking at the streamlines wouldn’t tell you which way the motion went. It’s symmetrical.

This symmetry applies to a single degree of freedom motion. If the clam is in an extremely viscous and not very dense fluid, and it opens, it gets drawn slightly toward the opening, and when it closes, it gets pushed the same distance in the other direction. It can pump itself back and forth, but there’s no progress. If the clam could extend limbs, pivot them one way, retract them, and pivot them the other way, over and over, then it could make progress. But not just by opening and closing, not just with one degree of freedom in a low Reynolds number environment.

Thanks, that explanation made sense!

I suddenly want a cuppa beef bullion soup, how odd.