I think the art is pretty good and if I had money, I’d buy one. Not for influence, but as an investment and because the art is pleasing to me. I’d think art from the son of a former president of the US might be of some value in the future.

Hunter isn’t doing anything wrong. I think it’s unfair to hobble him from earning a living in a perfectly legal way because the Trump spawn did it in an illegal way.

I don’t think there is anything he could do that would satisfy some folks.

This is nothing but blatant and cynical opportunism on the part of Hunter Biden.

That’s a synonym for “good business practices”. Celebrities bank on their name to sell stuff. That’s what branding is. There is nothing unethical about it aside from the general “down with kapitalism” sort of criticism.

This Hunter thing, and frankly, all Hunter things, are a nothngberder, and I don’t think there’s anything unethical per se with banking on celebrity. But doing so destroys the argument ad populi that because something makes an artist a lot of money that it must be better than art that doesn’t make a lot of sales. It’s often business practices.

Discussing this topic as if the sale of paintings matters, IS THE PROPAGANDA, and I will not be part of it.

If you care about ensuring it doesn’t have an effect, you should try to combat the propaganda, because that’s what’s going to matter.

I don’t think there’s anything to worry about with the painting sales, but I’m offended that they came up with such a flimsy “anonymous” buyer protection plan. It is so simple that it is dismissive towards the concerns people have about the possibility of undue influence. And trying to show that there’s nothing to worry about because the buyers will be “anonymous” just makes me more frustrated. I don’t know if they think I’m stupid or if they’re stupid to think that it will work to provide any sort of real protection against influence. And the most stupid thing is, I don’t even think anyone is going to be buying the paintings for influence anyway. So they took a benign event and wrapped it in a stupid solution that makes people wonder if they’ve contrived a facade to hide what they are doing.

What they should have instead done is say that all buyers would be public and that sales to buyers that might be deemed problematic would be cancelled. So if someone like a tech leader tries to buy a painting, their name is published and the sale may actually be cancelled if the sale could be viewed as a conflict of interest. And if it causes the prices to go down, oh well, they’re happy to accept that consequence to ensure that there is no corruption.

I think the art is pretty good and if I had money, I’d buy one. Not for influence, but as an investment and because the art is pleasing to me. I’d think art from the son of a former president of the US might be of some value in the future.

Hunter isn’t doing anything wrong. I think it’s unfair to hobble him from earning a living in a perfectly legal way because the Trump spawn did it in an illegal way.

I don’t think there is anything he could do that would satisfy some folks.

This is exactly how I feel.

When I got into my career, I was unqualified for it. I’ve been doing it now for over 25 years, so at this point I’m very qualified. The same goes for Hunter- at this point, he’s got a lot of experience sitting on boards.

According to one of CNN’s legal experts, this does present an ethics issue, because the White House was involved in drawing up the agreement between Hunter and the art dealer. 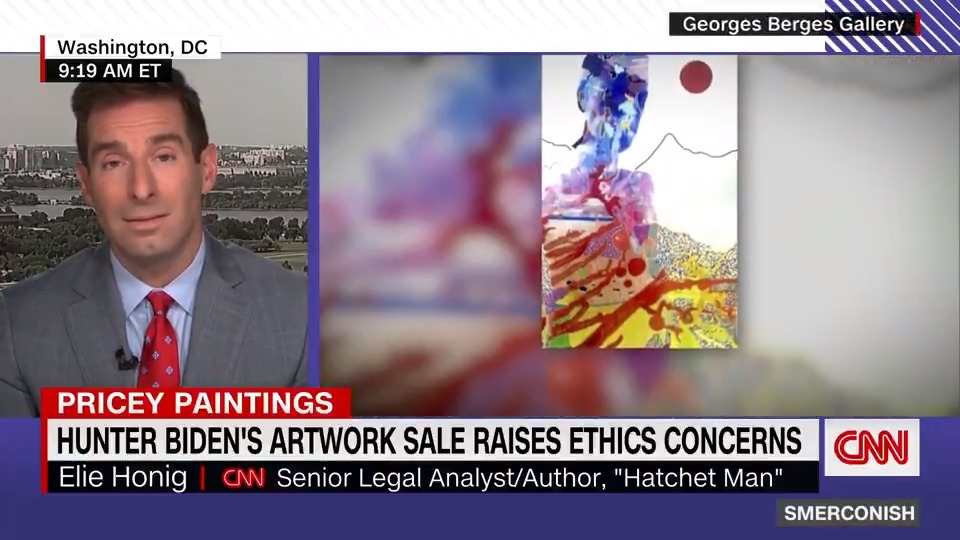 @CNN
Sources tell CNN that the White House was involved in forming an ethics agreement with the art gallery that's selling Hunter Biden's paintings. “It looks terrible for the White House. And they've got a complicated ethics problem on their hands now, says @eliehonig. https://t.co/NtZ9dEBddq”

Seems like the “but he’s just a private citizen, who cares,” argument falls flat when the WH involved itself in the agreement.

Seems like the “but he’s just a private citizen, who cares,” argument falls flat when the WH involved itself in the agreement.

What resources–legal, PR, whatever–were expended on behalf of private citizen Hunter Biden? How is that NOT using government resources to benefit a family member?

I doubt they were expended on Hunter’s behalf. More likely, they were spent on the Administration’s behalf at the suggestion of the OLC.

I, for one, appreciate your contribution to this thread. You’ve just demonstrated that no matter what Joe Biden did in this situation, someone would have taken issue with it.

If Hunter is a private citizen who is not bound by government ethics, why would the OLC make such a recommendation? The “L” in OLC is Legal, not PR.

If the WH did something to benefit Hunter Biden that’s a bad thing that should be condemned.

So far no one has presented any evidence that this happened.

Remember that when the “last guy’s” child had a design business, she and members of the President’s staff used their positions to promote her designs in a variety of ways - and, in at least one case, told their audience outright to “go buy Ivanka’s stuff”.

But that’s different I guess, because…he was gangster and not a real President, so he got to play by gangster rules, or something.

I mean, I can think of 74M who didn’t seem to mind and 82M that minded a whole lot. What is your point? Because nobody in this thread has said so far that it’s okay when the Trumps do it.

It’s different because with Hunter the worry is that he’s selling access to the white house and using his ‘art’ to launder illegal transactions that point to influence peddling.

If Ivanka Trump was selling mundane dresses for half a million dollars, and the Trump White House worked hard to make sure no one could ever know who the buyers were, and Ivanka had a history of brokering deals woth foreign governments, the I guarantee you every Democrat on this board would have screamed bloody murder.

Lots of children of famous people try to make bank off their famous relations. Billy Carter did it, Anyone Kardashian-adjacent has tried it. That’s not the issue here. The issue is that Hunter Biden is selling pedestrian artwork for outrageous sums that don’t seem warranted, and the Biden White House has arranged it so that the public has no visibility into who is buying it.

That, coupled with Hunter’s already shady-seeming dealings with Burisma and the Chinese government, create an appearance of impropriety and conflict of interest.

But the exponentially greater amount of actual graft that characterized the Trump Administration is A-OK, right? Emphasis on “right”.

And frankly, 250 posts after I was YELLED AT for being a “broken record”, at this point, I’ve got to agree. This has been a circular argument since very early in the thread. I’m going to bow out.

It’s turtles ethical scandals all the way down!

The artwork does not merit the price. This is to buy influence with the President or fund a political movement - clearly. The donors names are kept secret to protect them from public scrutiny and so that the rest of us can’t quite put 2 and 2 together.