I am so embarrassed right now...

I had made a personal call from my desk at work…
and my boss overheard it.
Let me explain. I work in a call center. I was logged into my phone. My boss can “service observe” or listen in. I had forgotten all about that.
Since I was on an outgoing call for “an excessive amount of time” ie eight minutes, I was 'service observed."

I was then informed not to call my boyfriend while at work.
Great. My boss heard me sounding like a moron, babbling to my SO about how bad I wanted to talk to him and Funions.
[sub]We’re both addicted to Funions. The shame…[/sub]

I’m not embarrassed that I was caught being a little bit naughty at work, it’s just the idea of my boss hearing me babble to my SO.
::hangs head::

You weren’t talking about the FB situation were you? :eek:

Tripler
It’s okay to get up and stretch every now and then!

I must admit amazement. A woman talking on the phone for only 5 minutes? Wow.

*Originally posted by hardygrrl *
**My boss heard me sounding like a moron, babbling to my SO about how bad I wanted to talk to him and Funions. **

You talk to Funions? That would be embarassing.

Eight minutes on the work phone and then ten on the cell outside,having a smoke.
Funions…as SP said, “gross by description, but guiltly yummy.”
**Crunchy{/b], we were discussing Funions. I wasn’t talking to the Funions. IIRC, I shook the bag and told him that I had Funions and I wasn’t sharing.

[sub]Still grateful my boss didn’t hear the “Who’s my little ferret?” ‘me’ part of the conversation.[/sub]

There, there, **hardygrrl.[/v] Everybody makes mistakes in coding.

Coding is the least of your worries if you’re conversing with snack food.

Crunchy
We were talking ABOUT Funions, not to the Funions themselves.
[sub]At least I didn’t ask SP if the sound of my voice was having it’s usual effect on him…talk about your TMI[/sub]

*Originally posted by hardygrrl *
**We were talking ABOUT Funions, not to the Funions themselves. **

So you were gossiping about snack foods? How does that work? Have the Funions been hanging out with the Spicy Doritos or something?
[sub]Ok, I’m done now[/sub]

It’s actually spelled Funyuns, and they’re onion-flavored crunchy snacks shaped like rings and made out of almost exactly the same stuff as Cap’n Crunch (except for the flavoring, of course). Lucille Ball used to be their celebrity spokeswhore back in the 70s.

I agree that they’re a guilty pleasure. I can’t buy the big bags of them because I will be sitting and watching TV, and my hands will sneak them past my brain and into my mouth until the whole bag is gone.

I did a Google search to see if I could find a page about Funyuns for poor kniz, and what did I find but an Onion article: Funyuns Still Outselling Responsibilityuns.

Can’t code, can’t spell, but I can babytalk like it’s an Olympic event. 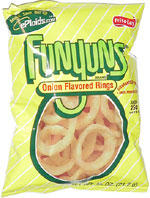 Frito-Lay snack - one of 57 onion rings reviewed by Taquitos.net's snackers.

Don’t you people know about http://taquitos.net/chipworld/?

Everyting you need to know about snack chips.

I wish I had some Funyuns right now. Some Funyuns and an icy Diet Coke…

[sub]At least I got to talk to my baby this morning without prying ears.[/sub]

Phew . . . I thought “funions” were some horrible kind of sex-related foot growth, and was wondering why you enjoyed them so much . . .

*Originally posted by Eve *
**Phew . . . I thought “funions” were some horrible kind of sex-related foot growth, and was wondering why you enjoyed them so much . . . **

Even I have some limits.

I won’t stalk Crunchy Frog and I don’t do anything odd with feet. Mine or anyone else’s.