I need some help matching up an electrical motor - Please?

Just got out of the attic and pulled the worn out motor from my attic fan.

I got pretty close on Grainger. Except for the Phase and Type
Note this is grouped under belt drive motors in Graingers Catalog.

Graingers is a Split Phase and I’m guessing ODP is the type?

What’s the difference in phase mean? Does it matter for my attic fan? Does it wire differently?

How about Type FHT on my original motor? There’s also a label that says my motor can be mounted horizontally or vertically. It’s mounted vertically on the attic fan.

Is Graingers motor dual mount too? Graingers says it can run CW/CCW . How can I tell which direction mine runs?

here’s another one that seems the same? Except it’s $35 cheaper. 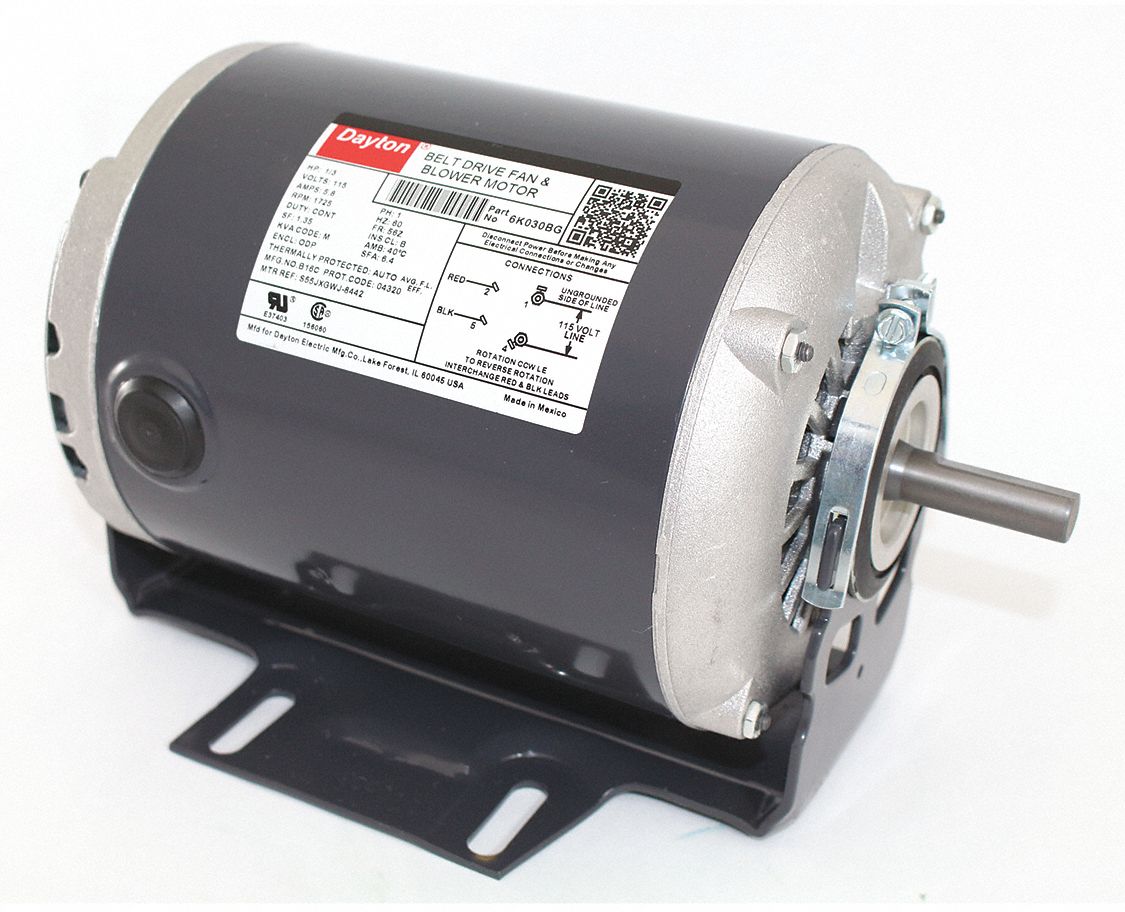 Would either motor work? Any reason to spend the extra $$$ on the first motor?

Really appreciate any help you can provide.

What I would do in your shoes is find a heating/air conditioning supply house local to your area and bring your motor to them. They should be able to match one to fit it. If you have a local Grainger retail outlet, they will do, also. My point is that if you take to someone, they will usually be able to match it with a motor that will work. I’ve done this with both Grainger (when I worked is a city with a Grainger retail outlet) and with a HVAC distributor in a city without one. Both times they were able to get me a motor that, while did not look exactly like the one I had, but was a drop-in replacement (one for a clothes dryer from Grainger and one for an AC condenser unit for the HVAC distributor).

excavating (for a mind)

I have a local Grainger. I plan to take the motor by and see what they recommend. I just wanted to research it myself first.

Never know if the guy behind the counter was sacking grocery’s last week. I want to know enough myself to tell if the counter guy knows his stuff. Hopefully he will, because I only know a little about motors.

Split Phase is a type of motor. It’s a single phase induction motor. Split phase just means that there is a separate winding inside the motor that is used to start it, instead of say a capacitor which is used in the ever so creatively named capacitor start motor. Split phase is cheaper and simpler (the capacitor start has to have a mechanism to disconnect the capacitor once it is running) but has less starting torque. There are other types of single phase motors as well, such as the shade pole for example.

ODP means Open, Drip Proof. It’s designed in such a way that water dripping onto it will not drip into the inside of the motor and cause corrosion of the coils and other internal parts. Both of the motors you linked to are ODP even though the second one doesn’t say it in the title (it does say it in the specs below).

CW and CCW is usually determined by looking at the motor from the shaft end, but I’ve seen some oddballs define it from the other end (I suspect that Grainger probably does it the right way). Getting one that can go either CW or CCW eliminates any potential problem there. I’m assuming that your existing motor still runs (if not well, and loudly) so you can just look at it from the shaft end to see which way it spins.

Thanks. I checked and there’s no capacitor mounted on the motor.

I feel like that first motor I linked is a close match. But, I will bring the old motor to Grainger and confirm it’s the one I need.

Looking closer at the specs, the cheaper Dayton motor full load amps is 6.6 and A.O. Smith is 5.7. So the cheaper motor draws an extra amp. That means then it costs more to run? A.O. Smith may be worth the extra $28 if it uses less electricity.

I have a local Grainger. I plan to take the motor by and see what they recommend. I just wanted to research it myself first.

The Grainger guys very much know what they’re talking about…and if you ask them something that is beyond what they know, with one phone call to tech support they’ll be talking to a guy who just deals with motors or light bulbs or relays etc.
You can usually trust them to get a match or at least the closest fit.

FTR, I take motors and various other parts to Grainger all the time. I’m probably at a Grainger (I have two of them I frequent) 10-12 times per year…almost always for motors.
The biggest problem you’re likely to have is if the attic fan was a cheap $50 thing from Home Depot and they can’t find one that fits into the original mounting hardware since it wasn’t anything standard or it’s since been discontinued.

Doesn’t the frame (56Z) determine whether all the bolts line up in the holes? Seems like my old motor is pretty standard. I was surprised it was only a 1/3 hp. But it cools the house and pulls in a lot of air really well.

This attic fan is built like a tank. It was installed around 1955. The pulley on the blade looks about 10 or maybe 12 inches. I replaced the belt about 15 years ago. Got it from NAPA.

Doesn’t the frame (56Z) determine whether all the bolts line up in the holes? Seems like my old motor is pretty standard. I was surprised it was only a 1/3 hp. But it cools the house and pulls in a lot of air really well.

This attic fan is built like a tank. It was installed around 1955. The pulley on the blade looks about 10 or maybe 12 inches. I replaced the belt about 15 years ago. Got it from NAPA.

Frame size should give you the same mounting. By taking the old motor you can check the mountings. Also check shaft diameter and lenght.

Keeping to a motor with the same rated amps will also mean that any motor starters will have the proper heater sizes.