I was assaulted at work over vaccines/masks

But it might still be possible to teach them that it is unsafe to act like assholes.

I’m very glad this wasn’t worse than it was. I really hope you’ve seen the last of him.

People are crazy as hell. Check out this guy growling on this plane. Maybe when they made those maga hats, they used leaded fabric. 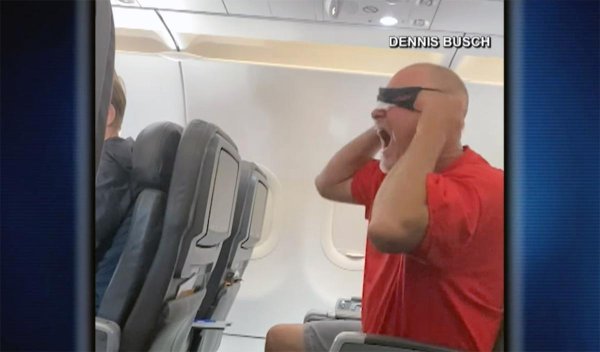 Watch: Unruly Airline Passenger Growls at Flight Attendant Who Told Him to...

A Las Vegas man who berated a flight crew and passengers and growled like a dog on an American Airlines flight from Los Angeles to Salt Lake City has been cited for public intoxication and disorderly conduct.

Do we get to tell them what the Nazis did to the members of the White Rose? I mean, if they think we’re the Nazi’s…

Hey, the United States government is better than that. We’re not going to put them in concentration camps because of their beliefs! It’s just a coincidence that their members keep getting arrested and put into jail for years at a time. Just because the prior meeting had 12 people at it, and this one only has 10 because Cletus got arrested on a drug charge (probably planted the meth lab in his kitchen) and Rosco was killed in a prison riot after his conviction for straw gun purchases.

This, by the way, is how the conspiracy theories keep flowing. Nothing is their fault - all of these consequences are from a deep-state conspiracy. Hey, they are out to get us! We are just like the White Rose!

I wasn’t thinking of concentration camps. Sophie Scholl (a hero of mine) and her brother Hans faced this instead: The guillotine used to execute Nazi resistance siblings Sophie and Hans Scholl in 1943 appears to have been found in southern Germany after being thought lost for decades, a museum said Friday.

They might want to rethink who they think is the opposition.

How big a stick? Something like a ruler? A yardstick? A broomstick? Is a baseball bat too large?

How big a stick? Something like a ruler? A yardstick? A broomstick? Is a baseball bat too large?

How big is a fuck-off stick?

I have a nice wooden walking stick with an inch and a half maple ball on the end. I figure that’s sufficient. If poking them with the rubber tip end doesn’t get the message across, the maple ball to the side of their head should do the trick.

Click on the link and then hit escape repeatedly as it loads. Worked for me…

That worked. Thanks. And yuck.

Answers the question: “How many kinds of asshole can a person be at one time?”

Is there any chance your store has security cameras on the lot?

Yes, but they are mostly for the front of the building, and have limited visibility at the distance we were, about halfway out the parking lot.

Basically if you are assaulted by someone who refuses to leave your place of business or put on a mask, the cops are not going to even register a report. It’s happened in our company literally tens of thousands of times. Basically they insist that we let the mask-hole finish their shopping “as quickly as possible” which includes jumping checkout queues. Pissing off other customers who are following rules.

Wow, what an abrogation of duty. If you tell the cops the person is trespassing, they should escort them off immediately. Your response is “They concluded their shopping when they ____. I told them to leave immediately. They are now tresspassing. I don’t want their business, I won’t sell to them, and if they take anything that will be theft, too.”

But I’m a dick that way. I’m sure my company would love that response from me.

But I hear a lot of local officials and sherriffs and the like spouting off about not enforcing mandates and the like, so yeah, I’m sure it’s a thing.

Why in the world would these idiots appropriate a white rose symbol for themselves? Sophie Scholl would not have been amused.

Good question. My brief efforts to google the topic lead straight there and pretty much nowhere else, so maybe the person I heard it from was misinformed.

Wow, what an abrogation of duty. If you tell the cops the person is trespassing, they should escort them off immediately.

As a practical matter you cannot make a cop do ANYTHING he/she doesn’t want to do. And it is almost impossible to punish them for dereliction of duty, unless the police chief and Union are on board.

I mean I personally know a person who was stabbed over a dozen times by her estranged husband while a cop was in the room. I mean the cop entered the house with the wife and the husband who had broken in and was “lying in wait” started stabbing her with a knife, and the cop moved to the other side of the room “to protect any others, possibly children” who might be in the house. He was cleared by a review board.

Same thing with people assaulting BLM protesters. The cops who are ostensibly there to keep the peace are actually there to make sure there is no retaliation from the “wrong” side. Hell we have had two cops moving a group middle school age girls holding BLM signs “for their own safety” as a couple of yahoos tried to take their signs, spit on them and threaten them with GBH and even rape.

And I live in one of the most politically and socially liberal states in the country. It seems like the hostility cops have is dialed up even higher here because they feel that “everyone” is against them.

The cops who are ostensibly there to keep the peace are actually there to make sure there is no retaliation from the “wrong” side.

To quote the eminently quotable Richard J. Daley, Mayor of Chicago during the 1968 Democratic convention,

To those wondering about the White Rose thing, there is a subset of white supremacists who co-opt the identity of non-bigoted things. They know at some level that their beliefs are beyond the pale and adopt identities that distract from the actual beliefs. The controversy about the ‘OK’ hand gesture during the last part of Trump’s presidency was an example and I think this is another.

The swastika had been a positive symbol of spirituality in a number of cultures for centuries - the Nazis changed all that.

So, anybody want to move to Texas?

I can’t think of a single reason, either now or in the future.

White guys on the mainland always looked silly in Aloha shirts, but now it’s for racist assholes what leather bowties once were for cabbies.

The White Rose was a World War II group fighting the Nazis. Now anti-vaxxers, seeing themselves as freedom fighters, have taken up the mantle.

The White Rose has been co-opted by antivacxers who believe they are antifascist. That guy? Not what I’d consider antifa.

I’m so sorry that this happened. It sounds truly horrible.