I briefly saw a photograph, but was unable to capture it so I can’t do an image search on it. And many attempts at googling have utterly failed me.

The picture showed a long driveway (I think it wasn’t paved with asphalt or the like, just beaten dirt, maybe?) running between two lines of trees. My impression was it was a private way leading up to some substantial house/manor/building of some kind. The trees had NO branches or forks for a significant height, maybe six or eight feet? It’s hard to be sure because there was nothing else in the frame to gauge the size by.

Clearly this was a deliberately created way, the trees were evenly spaced apart from one another, and formed a straight line along the drive on both sides. The trees were substantially grown but not aged, as in, they looked to be of normal trunk width, versus being sapling or gnarled or twisted by happenstances over many decades.

But what really struck the eye was that the bark on each of the trees changed from one color and texture to another in an abrupt straight horizontal line, with a somewhat darker line between the two, as if it were a scar? Still guessing, but the dividing line was maybe four feet above the ground.

From the ground up to the ‘scar’ the trees has fairly dark gray, ordinarily rough bark – not shaggy or peeling, just with areas irregularly higher or lower than other bits. From the scar up, the bark became many shades lighter and much smoother – almost as smooth as birch bark, but nowhere near that white.

It looked for all the world as if someone had grown a tree for a while, then lopped it off vertically at three/four feet or whatever and grafted on the upper part of an entirely different species. And done this over and over, to create two solid lines of these altered trees to act as a showcase for their house access road.

The thing is, I’ve never heard of anyone doing that, as a horticultural technique.

I know this doesn’t ‘matter’, but it was just such a baffling sight. I’ve seen many pictures of trees that had been pollarded or coppiced or had other varieties grafted onto them or been topiaried in various ways, but I’ve never seen or read of anything like this being done on such a large scale.

Does anyone recognize what I’m trying to describe?

There are a couple of things that might be happening here:

The trees might be pollarded - this is a practice where the top growth of a tree is cut off and allowed to resprout - it typically results in a tree with a thick, straight trunk to a certain height, then vigorous growth above that point - often the growth is composed of many thin vertical shoots or branches.
(Coppicing is the same thing, done nearer ground level - historically, this was often done in managed woodland to be able to treat the trees as a crop from which long straight poles could be harvested, or just wood for burning, charcoal making, etc. Pollarding is coppicing above ground level and was sometimes done where coppicing would fail due to grazing animals).
If the trees you saw were pollarded, the difference in the bark might just be because the top growth is much younger than the trunk.

Alternatively, the trees could be grafts onto a standard - that is, a rootstock is grown as a single stem until it is the correct height, then buds are grafted into the top of this stem -these buds are encouraged to grow and the natural buds of the rootstock are prevented from growing. As the tree grows, the stem thickens into a trunk and the grafted buds are the source of all of the branches.

Another possibility is top-working. This is usually done for fruit trees - all of the top growth is cut back and buds are grafted to the stump of the trunk - similar to the above, but often done on mature trees - for example a mature apple tree can be treated this way to change the apple variety without replanting the tree - and it develops to fruiting maturity much faster.

Do you mean something like these grafted walnuts? Or these:

Yet another harvest has wrapped up. So growers can put their feet up until spring? Not quite. There are still many things to manage in the orchards over winter. So what are some of the things to be mindful of? Post-harvest If you are pruning this...

Sounds something like espalier technique, but that’s usually done with fruit trees grown on supports. 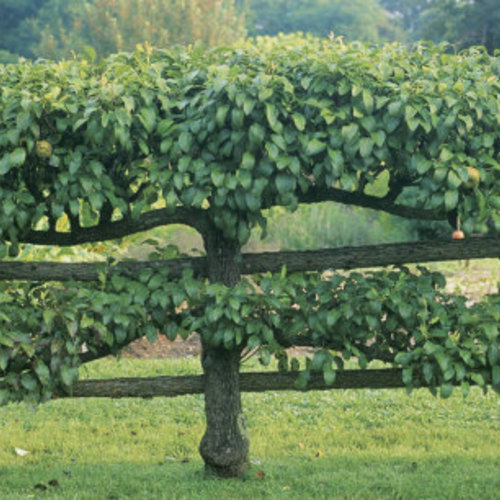 Produce more fruit in less space with this centuries-old technique. Ron Wade guides us step-by-step through the first three years in the life of an espaliered apple tree.

I don’t think the OP is referring to horizontal branches, just an abrupt horizontal transition of bark texture.

The thing to remember is: the tree trunks were not always thick.

A variant of pollarding is pleaching, which involves a more formal and strict horizontal training of the top.

Sounds like an English walnut. The furrowed bark is the black walnut rootstock that it’s grafted onto. 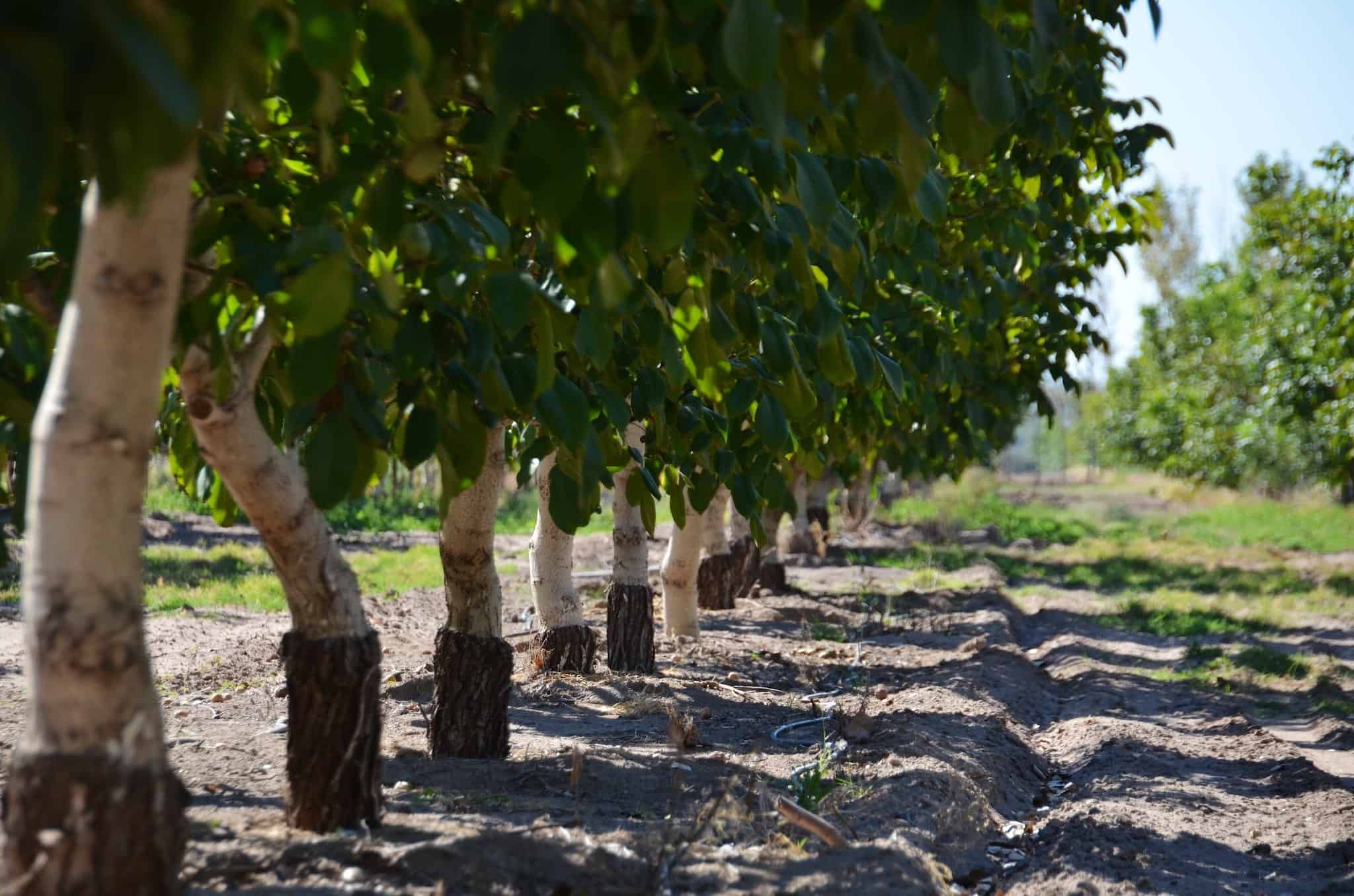 The English Walnut has many different names, but all these names refer to nuts that come from the juglans regia tree, the latin name for the walnut tree.

Do you mean something like these grafted walnuts ? Or these:

Yes! That’s it exactly! The right colors/textures of bark, the abrupt horizontal changeover. The ones in the second link look much older than the ones in the original, but clearly the result of the same technique. Thanks!

Sounds like an English walnut. The furrowed bark is the black walnut rootstock that it’s grafted onto.

And you got it exactly right, too! Strange, how I’ve eaten walnuts forever – they’re my favorite nut – and I had no idea they were grown on Frankenstined trees.

If I were so old already, I’d make a stab at creating my own walnut trees.

Most fruit and nut trees are grafted on to the rootstock of a different variety or related species. They have been for centuries – grafting is ancient. You just noticed the walnuts because it happens that the bark of the rootstock and the scion are very different.

Typically the rootstock has qualities the scion lacks, such as vigor, hardiness to cold, disease resistance, and the like. In apples, you can get any variety grafted on to various rootstocks which will keep the tree to the size you desire, all the way to extreme dwarf.