If I were small enough to stand on a virus...

Let’s get small. So small we could stand on the surface of one of them COVID19 viruses and be as tall as one of the spiky things. Can I see individual atoms yet, or do I have to get really small for that?

You can’t see individual atoms via optical microscopy because they are too small. I am not convinced you could even image the entire virus virion, but maybe someone has got a fuzzy picture using advanced techniques.

Those spiky things are individual molecules made up of a few thousand atoms.

You are probably aware that when we look at really tiny things we aren’t “seeing” them in the conventional sense. Our sense of vision, based on visible light, can’t image something that small.

This is what COVID-19 looks like under an electron microscope.

Having caused an extensive health scare and over 1,000 deaths so far, the COVID-19 virus (also unofficially known as 2019-nCoV) has received wide media coverage since its discovery in December last year.

I don’t know if you are going by images like these or if you are just going by the artistic drawings show in many news articles and such.

Anyway, to put everything in perspective, COVID-19 is about 100 nm in diameter. A water molecule is less than 1 nm, and an individual gold atom (pretty large as atoms go) is about 0.1 nm.

If you are as small as one of the “spiky things” then you are down to about the right size to start seeing the individual atoms, assuming that you could somehow “see” something at that size.

See here, about halfway down the page:

To Beat Covid-19, Scientists Try to 'See' the Invisible Enemy

Using beams of X-rays and electrons, researchers are creating a moving model of the coronavirus in order to discover its weaknesses.

The SARS-CoV-2 virus that is causing all this mess has, as per Wikipedia, a diameter of 50-200 nanometres; let’s say 100 nanometres, for order of magnitude. Atoms vary in size depending on the element, so let’s take carbon as an example, because we’re talking organic matter here. The carbon atom has a radius of 70 picometres, which means the diameter would be 140 picometres, or 0.14 nanometres. So the virus is still three orders of magnitude larger than an atom.

Also, you seen to be suggesting that you could get a good picture if the microscope itself were really, really small. Not sure how that is supposed to work or what it means, though there may be super-resolution techniques that involve the use of nano-size features (the entire microscope is not that miniature, though)

This Microscope Can See Down to Individual Atoms

The UK's superSTEM facility got a new electron microscope with unprecedented resolution.

Perhaps when we get that small our eyes become sensitive to electrons.

"The guitar has six strings, each string about 50 nanometers wide, the width of about 100 atoms. If plucked — by an atomic force microscope, for example — the strings would resonate, but at inaudible frequencies. " 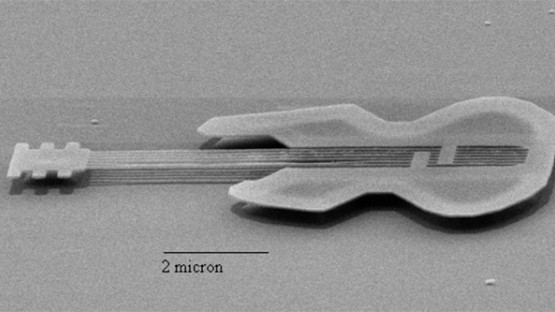 Smallest guitar, about the size of a human blood cell, illustrates new...

The world's smallest guitar — carved out of crystalline silicon and no larger than a single cell — has been made at Cornell University to demonstrate a new technology that could have a variety of uses in fiber optics, displays, sensors and...

Also, you seen to be suggesting that you could get a good picture if the microscope itself were really, really small. Not sure how that is supposed to work or what it means, though there may be super-resolution techniques that involve the use of nano-size features (the entire microscope is not that miniature, though)

If I may elaborate a little on that:

The laws of physics put limits to the resolution of any optical system, called the Abbe limit. Summarised very briefly, one can say that a microscope, no matter how good it is, cannot resolve details that are smaller than half the wavelength of the radiation it uses to operate.

Visible light is electromagnetic radiation with wavelengths between 380 and 780 nanometres. Applying the Abbe limit, you’ll see that the optimum resolution of any telescope working in the visible parts of the spectrum is still quite a long way away from discerning individual atoms, which have a diameter of less than a nanometre.

That is the fundamental idea behind the electron microscope: It uses wave-particle dualism, whereby a stream of electrons behaves as if it were a wave, with a wavelength far smaller than that of visible light. That is how it is able to resolve much smaller details, all the way down to the atomic level.

Ignoring the physics issues of “seeing” something that small, or of a person being that small in the first place (are your atoms smaller than normal atoms? Or do you just have fewer of them?)… As a purely mathematical question, the coronavirus is about 100 nm in diameter, and the “spikes” seem to about 1/10th that size, or 10 nm. So 2 meter human shrunk to 10 nm has decreased by a factor of 200 million (linearly). Atoms are about 0.1 nm in diameter, so an atom would appear to you to be 0.1 nm x 200 million = 2 cm in diameter. So yes, atoms would definitely be big enough to see.

Maybe a better thought experiment would be to scale the virus UP rather than the human down. Then you don’t get off track worrying about ‘seeing’ at small scale.

Maybe a better thought experiment would be to scale the virus UP rather than the human down. Then you don’t get off track worrying about ‘seeing’ at small scale.

Right? Been posting here for way too long to not anticipate the details of “why the question itself violates the laws of physics” eclipsing the actual question. Doesn’t piss me off the way it used to because sometimes I learn something, even though I wasn’t really looking to learn that particular thing. But that’s life, I guess.

And…thanks EVERYONE for your responses. It’s always interesting to learn the true depth of my ignorance is not limited to merely the things I know I don’t know.

Here is a model of the protein spike. If you were the same scale as that, the atoms would probably be somewhere between ping-pong balls and tennis balls.

Here is a model of the protein spike. If you were the same scale as that, the atoms would probably be somewhere between ping-pong balls and tennis balls.

And if you click the link to download models, it’ll take you to a page with 3D models you can rotate and zoom in on in the browser.

Great, so I can willingly download a virus. Wonderful what we can do nowadays!