I'm cutting my dog's leg off.

Presley my border collie, has cancer. Synovial Cell Sarcoma to be exact. In his right rear ankle. We’ve talked to the vet, had the biopsy done (It’s stage 2) and weighed our options. I just love the fella too much to put him down, so I’m opting for what kinda feels like the selfish alternative. We’re going to amputate.

When I was a kid, there was a dog in the neighborhood that was a tripod. He was a tough dog, and could easily pull me over. But his missing leg was his front leg. In fact, all of the tripods that I can remember were missing a front leg. I can’t recall any that were missing a rear.

Does anyone out there have experience with this? Anecdotes are welcome.

You seem to be looking for confirmation that there are other happy, healthy dogs in the world with an amputated rear leg. I can confirm that there is a happy, healthy looking Clumber Spaniel in my neighborhood who has had his right rear leg amputated. I don’t know the story, but he’s adorable.

Good luck to both you and Presley.

I have seen films of dogs and cats missing limbs front and back. They seem to have no problems.
Good luck to you and Presley. 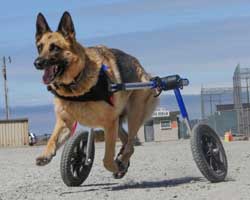 We offer Walkin' Pets and Walkin' Wheels products for handicapped pets of all sizes. Browse our carts and equipment for disabled dogs and other animals today!

Let me reassure you that most dogs do very well with three legs. They do not have the same vanity about their limbs as people, and they quickly adjust to going on three. Additionally, dogs that have a rear leg amputated generally have it easier than those that have a front leg amputated. Dogs bear more of their weight on the front end because of their structure, and it is fairly easy for them to compensate for rear weakness by transferring the weight to the front.

I’ve known two dogs with back legs missing – used to make people stare when they were exercised together. Both did fine, had no problems walking, running, playing etc. However one of the owners did say that he worried a lot about what would happen if his dog injured another leg. One time his dog cut a foot on glass in a stream and he had to carry it a couple of miles, so you need to take care when taking them off the beaten track.

I see your dog is male, as were both the ones I knew. This does cause them a little trouble with lamp posts … one just used to squat the other, daintier and lither, used to do a sort of pirouette onto his front feet followed by a quick squirt.

Yeah, dogs and cats (I guess animals in general, but I’ve mostly these) seem to adapt really well to a missing limb. Even a dog with a sticker in it’s paw can get around pretty good.

No dog anecdote, but a cat anecdote. I had a tabby named Biscuit when I was a kid. When I was about 9, he got shot- we never knew how, he hobbled up to the house, dragging his back leg, which was literally hanging by a thread. It was one of the few times I saw my dad cry. Dad and I took Biscuit to the vet, and the vet gave us the choice of putting Biscuit to sleep or cutting off his leg. Dad said it was my cat, so it was my decision. I opted for a tripod kitty.

My uncle had a dog with a missing rear leg. It was fine. I’ve also read that back leg amputations are better than front, because dogs dig with their front legs.

I’ve never owned a dog or cat that had to have a limb amputated, but I’ve seen plenty. They don’t have any problems, 'specially the rear legs. They usually run just as fast and move around just as well. You don’t need to worry about their quality of life; once he gets used to the missing leg he’ll never notice. My half-schkip used to play with a tripod at the local doggie park, and they had great fun snapping at each other over the tennis ball.

Go ahead and have your dog’s leg amputated to save his life. He’ll still have the same smiling eyes and cocky attitude he had before, and with luck he’ll have many more happy years with you.

I agree with everyone else that the dog will probably be perfectly fine with three legs. You’re doing the right thing by giving him a chance.
I once saw a TV show about a dog missing two legs (one in the front and one in the back) that still managed to walk!
Best wishes to Presley!

I’ve known several cats and a dog with missing limbs. It seems to take them next to no time to make the adjustment. Frankly, it always seems harder on the owners – the animals themselves transition very quickly.

My uncle had a dog with a missing rear leg. It was fine. I’ve also read that back leg amputations are better than front, because dogs dig with their front legs.

My sister’s dog Sadie-Roo is missing a front leg. My sister gave her a big ham bone once, and Sadie-Roo still managed with one front leg to dig and bury it in the yard. I didn’t see it (I would love to know how she did it), but somehow she managed.

Oh, and watch out. Sadie-Roo is normally fine with her three legs. But she’ll sometimes give you this pathetic look that says “I’m just a poor little three-legged dog, won’t you give me a treat?” (or “let me sleep in the bed with you”, or “pet me”, or whatever). She is very good at playing for sympathy, and her Auntie is a soft touch for that look

I seem to recall that on Clifford the Big Red Dog, the three legged dog was missing a hind leg. He did just fine and was super cool, too.

One of my neighbors had a three-legged dog who didn’t really seem to realise he was different, if you need *real life * examples or something.

And what a great looking dog is Presley! Makes me miss our own little Border Collie (best breed in the world) Lady, sniff.

In short, he’ll be just fine.

Not a leg but a tail anecdote.

My dog had to have half of his tail amputated maybe 6 or 7 years ago. Sometimes I think it must bother him a little because if he’s wagging near a wall he’ll do half wags.

When he turned 5 I had a party for him. Everything was dog related, even invited dogs. I took a picture of him, enlarged it and we all played pin the tail on Rocky. That was great party!

Our previous dog was a tripod for a little while. She dislocated a back leg and had to have it bound up to her body for a few weeks. She was an older dog so the adjustment took some time while the good leg got stronger. I was the surrogate leg while she healed. I used a towel as a sling to support her when she needed to squat. This worked so well I didn’t bother with a leash, I just rapped a towel around her middle and let her lead us on our walk around the block. It was the best bonding time I spent with that dog.

It was harder for her after her leg healed. It was too weak to support her and was in the way when she’d try and lay down. I remember finding her standing in the same spot I’d left her hours earlier because she couldn’t figure out how to get down with the dangling leg in the way. Eventually it got better.

A few weeks ago I saw a show on Animal Planet that featured a dog and a cat who both were missing two legs, front and back on the same side of the body. They were both gallivanting around just like four-leggers: chasing toys, running, wrestling, etc. Animals are amazingly resilient.

Give Presley a huggie from me, and be grateful that you can keep him with you. He’ll be fine.

I agree with everyone else that the dog will probably be perfectly fine with three legs. You’re doing the right thing by giving him a chance.
I once saw a TV show about a dog missing two legs (one in the front and one in the back) that still managed to walk!
Best wishes to Presley!

PS. My dog was a temporary tripod. Got along just fine, and she’s no where near as smart as a border collie.

I had a greyhound who had to have a front leg amputated due to cancer. He lived happily for three more years after that, and even perfected a two-point stance so he could lift his leg to pee (the first time he tried he fell into the bush he was trying to pee on, but he didn’t let that stop him). He could still run like the wind, too - someone who saw him said they didn’t even notice he was a tripod until he slowed down and started walking again.

A friend of mine had to have her greyhound’s rear leg amputated due to an injury that wouldn’t heal. You could tell he actually felt much better after it was gone, as the injury site had a chronic infection which I am sure was painful and made him feel bad. When they would go out, she’d put a boot on the one remaining rear foot to provide extra traction and to protect it from getting cut. She took him pretty much everywhere he used to go, and he did fine.

I believe the purpose of this is really to see if perhaps this type of surgery can be performed on humans more often in the future (apparently about 60 people, mostly in Scandanavia, have has this done). It would be very cool if it works well.