I'm Stuck In The Twilight Zone

1988 saw the release of the interactive fiction game The Twilight Zone- Crossroads Of The Imagination. I remember being very frustrated with the game. A few years ago, I returned to it. I made great progress. Then, I hit a brick wall. I eventually gave in and looked for hints and walkthroughs. I found none. There are videos of people playing the game on YouTube, but they don’t even make it out of the house you start in. I finally found a French page, used Google to translate it, and found that Computer Gaming World had published hints/ a walkthrough in March of 89. I found a PDF of the issue online. It confirmed that I had done everything right so far. I’m stuck in the stable I’ve tried all kinds of ways to hit a wall with the sledgehammer. Nothing happens. I fear the game may be glitched in such a way that I cannot proceed further. As the game has been fun so far, I want very much to complete it. I throw myself on the mercy of the food court!

Have you considered the possibility that you have reached the end state of the game? Maybe it intentionally doesn’t tell you that there’s nothing left to do. It would be on-brand.

I considered that. But, the hints in CGW say I still have plenty of game left. Plus, you start in a strangely deserted town. There are two entrances to the TZ in town, and a mysterious museum. The stable is in one trip through the TZ. Then, you play out The Most Dangerous Game in the other. All signs point to the end being in a strange museum. 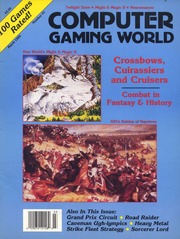