An English writer named Ben Schott published a few books full of interesting and odd trivia about fifteen years ago. They were successful, and inspired Spott’s Canine Miscellany, a fun book about dog trivia. Some excerpts below. Add what you like.

A dog’s yawn is a symbol of contentment, not boredom.

Nice list, but I do take issue with this one. Dog yawns can also be a sign of stress.

I’m sure more than one item on the list is probably dubious or incomplete. Do dogs really inherit so much? My dog yawns after eating steak but not before thunder storms. But many signals are ambiguous and need to be read as clusters.

A Dog is an animal who always wants to be on the other side of a closed door.

A dog’s yawn is a symbol of contentment, not boredom.

My Girls tend to do this right in my face. Their breath is like Un-cut Open Ass.

Sheepdog Commands: away, come by, stand, get back, in, lie down, walk on.

I’m always impressed when they kill a Jeep.

It would be cool to be a lawyer specializing in doggie wills.

I’ve quoted maybe ten percent of the book. Worth reading if you like that sort of thing. Lots of the items are difficult to transcribe, and both Schott’s and Spott’s Miscellanies are inexpensive on used book websites.

The word “dog” is of unknown etymology. “Dogca” just suddenly appears in Old English vocabulary about 1000 years ago. Prior to that, dogs were referred to by variants of the Germanic “hund”.

My personal theory is that “dogca” is an Old English swear word, associated with tripping over critters that do not move when they are comfortably sleeping.

The 27% of Canadian households with dogs is less than the 38% of Australian or 48% of US households.

Come on Canadians, step up and do your part. You’re dragging down the average.

Most male dogs are left-pawed and use it on preference to initiate movement or activity.

Never had a male dog, wonder if this is true.

Worth every penny in my opinion.

No idea. They go on to say a small minority of female dogs are right pawed. Perhaps that helps them dance? At the doggie park I frequent, It is not uncommon for two playful dogs to form what I call “the coat of arms”, where they are both semi-standing on back paws and leaning on each other with outstretched front paws. It is hilarious.

When dogs are play wrestling, they will sometimes sneeze to let the other pup know they are not seriously fighting.

Anyone else familiar with “reverse sneezing” (not making this up)? One of our dogs suffers from this on occasion, it really sounds like a kerchoo with the tape played backwards.

Dogs are about the only species other than humans who fully understand the pointing gesture. Even other primates have a hard time understanding pointing. Dogs are so good at it that they even get very subtle pointing gestures like a head nod toward something.

Dogs are so good at it that they even get very subtle pointing gestures like a head nod toward something.

Our golden retriever is able to understand a LOT of words, and will go into another room to fetch a specific object if we ask her to. She points a lot with her nose and ears, and will roll her eyes toward something of interest to her if we look her in the face. As in: It’s dinner time and she wants mommy to give her some food. While sitting at the table, I look down at her and she’s rolling her eyes toward mama. “Daddy, tell mommy I’m hungry!”

Saw this funny story on the internet (paraphrased):
A guy (presumably North American) was starting to date this nice European girl and was about to go on a business trip. He asked her if she could drop by his place when he was out, and walk his dog daily. When he returned, his dog was incredibly clean and fluffy, because she had misunderstood him as saying “wash my dog.”

I would guesstimate my dogs vocabulary at fifty words. I am not generous in assuming he understands a word - he needs to go well out of his way to demonstrate it on many, many occasions.

My dog is very expressive and it is always very clear just what it is he wants. He does not always get it, of course.

My dog understands head nods and follows what I am looking at. Pointing at something does not usually work and I am unclear what he understands in this regard.

You didn’t think that was going to stand, did you? 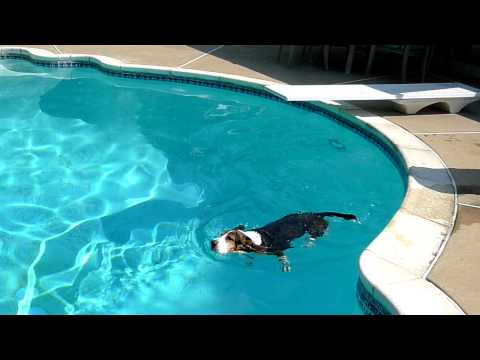 Hadn’t thought about it that much. Perhaps they meant using the butterfly?

Dogs have a mirror like coating on the back of their retinae called tapetum which gives dogs better low-light vision than humans and may show up as red or yellow eye shine in photos taken using flash photography.

Not all dogs have red or yellow lasers, some are blue/green. I have one red laser dog and two blue/green ones and the late Widget was also a redeye–it seems to correspond at least a bit to the actual eye color of the dog. People tend to think Bear is blind because of how odd his blue/green retinas look but in spite of being 13 he sees just fine. It’s his hearing that’s dodgy. Or he might just be ignoring me because he can sure hear a peanut butter pretzel being dropped two rooms away.

You didn’t think that was going to stand, did you?

Those two didn’t even break a sweat. Wish I could swim that well.

Perhaps they meant using the butterfly?

It really only qualifies as swimming if they can do the backstroke, otherwise it’s just dog paddlin’.

Not all dogs have red or yellow lasers, some are blue/green.

Wait! Your dogs have laser beam eyes? Original equipment or aftermarket? Must be expensive either way.

Haha, lasers is just what we call their eyes when they’re all reflective in the light. And, fortunately, they’re standard equipment!