In Praise of Ray Dalio?

I have read several business and economics books in the last few years. Many are of very limited use. Some are exercises in jargon or try to stretch an acronym into a hundred pages. Others are by successful entrepreneurs accustomed to having every odd idea applauded (butter in coffee?). Others struggle to express what visionary geniuses its authors are. Inexplicably, words sometimes fail to do so.

I liked Dalio’s honesty and approach in Principles, discussing what he uses at Bridgewater. He acknowledges his human flaws and comes up with a nicely ordered and practical set of reasonable rules for business and for life. I think the book was fairly successful. Much of his stuff is said to be free on his website but I haven’t looked there.

He has just come out with a book about “Why Nations Succeed Or Fail”. I presume more books will be out each subsequent Christmas. Although pretty simplistic, it clearly illustrates some important points to determine how sustainable countries are. I think he saw Trump as retrogressive, somehow. Compared to many of the business books I have read it is very clear. So much so I can’t decide if it is brilliant or banal. Possibly both.

What do you think of Dalio, Bridgewater, his books or even anything related to business education?

[Moderating]
A thread about how well Dalio writes, or how good he is at conveying ideas, might be reasonable for Cafe Society. But this looks like it’s more about the accuracy or validity of his ideas, which would be a more appropriate topic for Great Debates. Moving.

Part of the problem is the author has deliberately oversimplified things to make his points. He repeats himself often and spends too much time referring to future chapters. He states more a academic treatment is available on his website, but it should have been included in his book. His work is certainly less academic than, say, that of Kuznets or Kondratieff.

The question is whether it is helpful for investing, where Dalio is certainly on much stronger ground. A lot of business school theory makes too many assumptions and is too pseudo mathematical to be all that useful in the real world. This book is simple - a good and rare thing, as long as it is not too simple. It might be. This book could be better edited. Are the key principles sound? The reviews are polarized, mostly great with a few awful. His first book was excellent.

In this book, Dalio looks at the eleven biggest “empires” over the last 600 years, and China for the last 1500 years. Dalio is a successful entrepreneur who has been doing business in China for 36 years and is sufficiently connected that he probably has useful insights.

He is not the first to argue history or economics is cyclic. He uses a lot of (simple and atrociously coloured) graphs to prove it so. He divided countries into degrees of rise or fall on the basis of several political and economic indicators which gave occurred again and again to various degrees.

He concludes the US is beleaguered due to its large debt, polarized politics, partial aborted breakdown of rule of law, military spending and limited retreat from global leadership. He claims these patterns have shown themselves in the past. He states further concern would be needed if there is further brinksmanship with China including a war over Taiwan, a US refusal to pay debts to China, extensive tariffs, people moving away from the USD as a currency reserve and further weakening of legal and democratic norms. Nothing dramatically new, except wars may not be conventional. He sees China as on the ascension.

He also compares the governments reaction to Covid to previous attempts to stimulate the economy, difficulties in doing so when interest rates approach zero, and why he is concerned current economic times are similar in sone respects to the 1930s, although things are better understood and nothing is inevitable, especially if technology is used appropriately.

The rules are simple. This is a good thing, until it is not.

His book is basic but very clear and possibly useful. Might be my engineering bias but he knows how to identify relevant stuff and quantify them when possible.

I’ve met Ray. And many of his principles are what have made him and Bridgewater very successful. He fully embraces the challenge culture at Bridgewater, even maybe to an extreme. He like most people have biases that can cloud his judgement from time to time, and yet he will readily admit that, which is why he has made the challenge process such in ingrained part of Bridgewater’s culture.

Here is a 30 minute video of his that in very simple terms explains how the “economy” works. Sure most well regarded economist will find exceptions to his views, but it is a very good explanation that all high schoolers should watch in order to make them better citizens and voters, and even maybe intellectually curious to learn more. 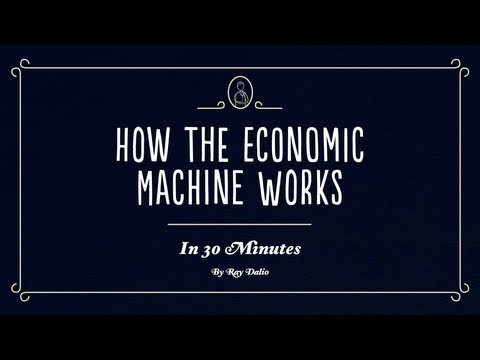