I’m sorry I hadn’t heard about this, especially when I was living in Utah. Too late now.
It’s popularly called The Logan Roundhouse, Stewart’s Folly, and it was outside Logan Utah:

The round house was intended as the prototype for a new, highly durable type of housing which would in theory be sold along hurricane-prone coasts and through Tornado Alley. Because of its lack of corners or flat exterior surfaces, the wind resistance on the building is almost nil, making it ideal for parts of the country where high winds cause problems for homeowners. The basic shell is also fireproof, as were the original Lexan windows, though the interior could burn. And it came with special fire escape plans that involved sliding through escape hatches and windows onto a rear scaffolding.
The house was begun in 1971 and finally completed in 1973. The shell was poured using a special homemade elevator system which involved the axle and wheel from a car. Two wooden shells were built–inside and out–and the concrete was poured in from the top. It hardened, the molds were removed, and the main part of the structure was done, with walls five inches thick on the sphere and eight inches thick at the base. From there they built the interior: two floors on top, complete with a porch, and a basement with a built-in garage.

What happened to this indestructible, hurricane-proof, fire-proof building? Someone set fire to it last week:

On the night of March 10, 2016 Stewart’s Folly was burned to the ground. State Fire Marshall’s have been called to investigate possible arson. 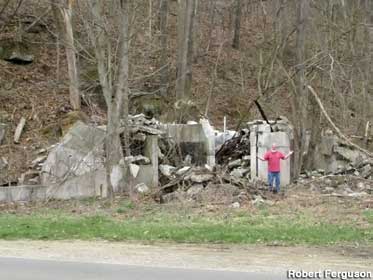 
How does a concrete building BURN, anyway? I’m assuming, based on pictures from the first website above, that all of that wooden crud that collected in the bottom when the (wooden) floors collapsed was doused with gasoline and burned, and that the heat fractured the concrete.

So much for being a “fireproof” building. 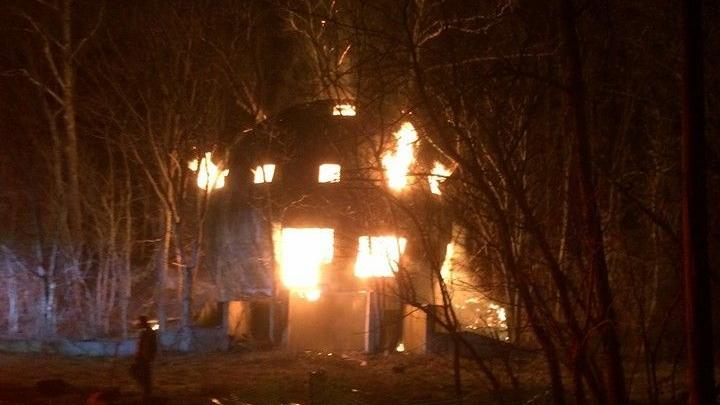 Roundhouse up in flames

The Logan Roundhouse, also known as Stewart’s Folly, was engulfed in flames Friday night as Logan firefighters battled the blaze in an effort to save the concrete building. The structure

A Youtube video showing scenes of the collapsed interior. Incorrectly places it in Ohio

That link’s in the OP, although it wasn’t there when I first posted.

… Incorrectly places it in Ohio …

All three of the sources cited in the OP also place it near Logan, Ohio. Is there any evidence that it was in Utah?

All three of the sources cited in the OP also place it near Logan, Ohio. Is there any evidence that it was in Utah?

Sorry – my fault. I assumed Utah because of the Logan there (and the survivalists)

Google maps shows it in Ohio too:

ETA: I see Cal has already self-corrected, but it’s still a pretty neat Google Street View of the house.

The house is (was) in Hocking County, Ohio . . . the most picturesque part of the state.

Y’all sure that wasn’t in Sleepy Hollow? Sure looks like Pumpkin Head to me.