I’ve been watching the cricket all day. Loving it. I just hope we can bat a bit better in this Test than we did in Melbourne.

The opening order has already done that

What gives me the screaming ijits is that after getting torn a new one by the Kiwis and then beating probably the worlds worst cricketing tourists our new national coach and South African reject Mickey Arthur goes into full hubris overload: “Australian attack could become world’s best - Arthur”.

Shithey Mickey, it’s the same bunch of pie chuckers who last year who could only get Poms out when they got bored. What ya got son? Three right arm fast mediums, only one of whose stock ball isn’t “bang it in and make 'em jump” and a right arm offie? Gawd save us.

Swap that rota for one tearway quick, one who can bend both the new and old ball, a left armer, a decent leggie and then you might have a world class attack. It requires variety. It requires a batsman or two who are wicket takers e.g Watson, not Hussey. It requires an learned and earned ability to bowl consistently under a variety of conditions, including those where there’s bugger all in it for the seamers.

Witness today when Pattinson got Gambir in the first over. It included two so wide they were in the Harmison league. Now I like our Jimbo a lot but you get him bowling on a deck that isn’t juiced and how will he go? Then answer is nobody has any idea because he’s only played a dozen first class games.

Now if it comes to pass, then hooray, hussar. But we only need one twisted ankle and we’d be chasing leather for days again.

Well Marsh is just a dud. Whether he scores runs or not he has no place in the Australian side. This is a guy that apart from one innings is averaging 20 odd in Test cricket. No surprise - in 11 years of first class cricket he had scored 6 hundreds and couldn’t average 40.

He is less than mediocre. However he can have as many chances as he wants.

Chris Rogers - made his first class debut 2 years before Marsh, 51 hundreds average of 51. Picked for one test to replace Matthew Hayden and never seen again. In his last 9 first class matches has 3 hundreds and 3 50s at over 50.

I’m sure if I looked I could find plenty more.

In the sporting equivalent of a celebrity death list:

AUSTRALIA’S latest fast-bowling sensation, James Pattinson, has joined fellow young gun Pat Cummins in the casualty ward after being ruled out for the rest of the Test summer. 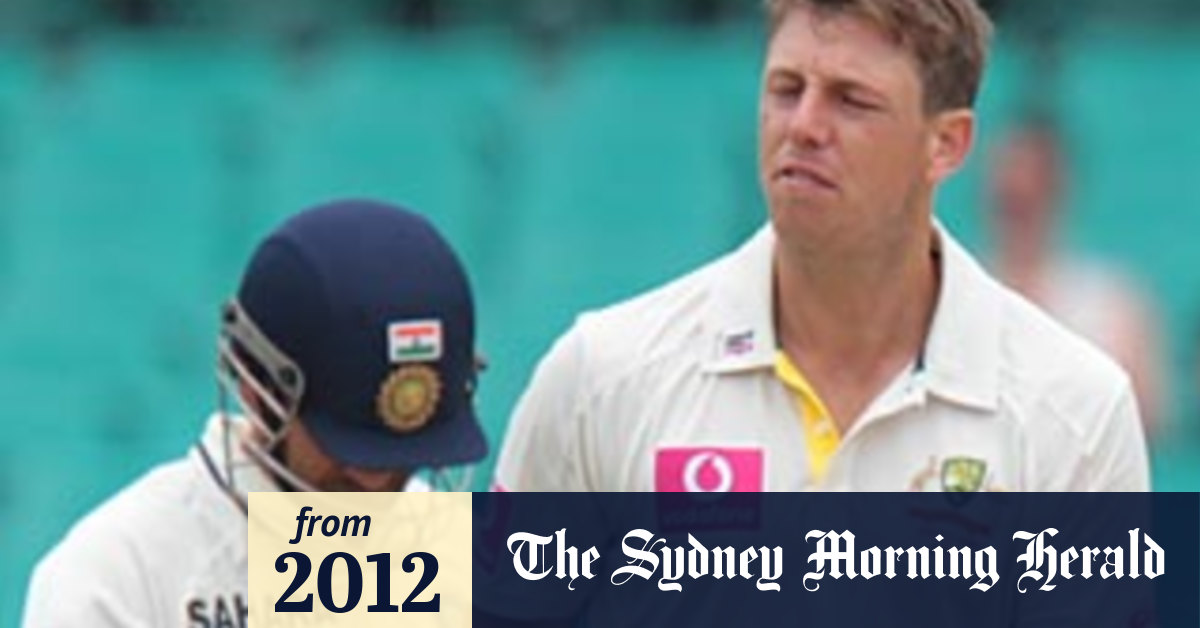 Exciting young spearhead ruled out for the remainder of the series against India.

I’ve only seen one day 1 in recent memory be so utterly one sided - Ashes 2010-2011, Melbourne. India, just utterly abject with both bat and ball. Bowled our for 160ish only for David Warner to smash the 4th quickest century ever, supported by Cowan, to nearly overhaul the Indian total in one session.

Bowled our for 160ish only for David Warner to smash the 4th quickest century ever, supported by Cowan, to nearly overhaul the Indian total in one session.

Fair enough but , on the basis of what we have seen so far, Dave Warner may just be freakishly good. He is only playing his 5th test but already has one of the best hundreds I have ever seen on a difficult wicket (123 when the prior 3 innings totals were 150, 136 and 226 and only one batsman scored more than 20 in the final innings) and now the fastest 100 by an opener in test history.

He gets hit in the head on 80 and then proceeds to hit 3 fours and a 6 from the next 9 balls. Awesome.

Imagine what is going to happen one day in the future when he gets going on a flat track against a side that bowls poorly. Who knows, maybe tomorrow.

I suspect Warner might well be a Sehwag - i.e. freakishly talented and either score single figures or end the game by scoring three figures very quickly with little in between. He’s going to be very interesting to see develop over the next few years.

This is really taking the sheen off England’s gubbing of India last summer though.

Note to India, the ICC called, they want their Trophy back.

*Damn it felt good just to type that ;0

This is really taking the sheen off England’s gubbing of India last summer though.

How so, what could they do but win every test? They were only bowled out in one test.

Note to India, the ICC called, they want their Trophy back.

Damn it felt good just to be able to type that ;0:p

You still want to tell Warner that?
On a more serious note I think India have only one really good bowler (Zaheer Khan),

the rest are pretty ordinary. This seems like a really fractured Indian side.

I wish they would also stop the bullshit about “The Little master”. He is an ageing batsman. A very good one. However it is arguable that he is not even the best of his generation (Lara).

You still want to tell Warner that?
On a more serious note I think India have only one really good bowler (Zaheer Khan),

the rest are pretty ordinary. This seems like a really fractured Indian side.

I wish they would also stop the bullshit about “The Little master”. He is an ageing batsman. A very good one. However it is arguable that he is not even the best of his generation (Lara).

I would say that he not even the best Indian batsman of his time (Dravid). He is a flat track bully and fails more often then not when India need him.

How so, what could they do but win every test? They were only bowled out in one test.

Just that a) India are not as good (at least away from home) as we in England perceived prior to last summer, as has now been proved twice and b) India had some excuses lined up last summer in that some of their first XI were injured. Now everyone is back and Australia are giving them an even more fearful pounding.

As I said, it makes what England did look less impressive, as Australia with a more green team, playing a full strength India is handing them their collective arses time after time. YMMV

Cumbrian, I take your points. I think this could be an emerging Australian side, but I still have doubts about a few aspects. Wicket keeping, spin bowling (Lyon is doing a servicable job) and I still have doubts over the batting. This may seem odd given the performances but I can’t take too much from this series against an under performing Indian team. I do like the performance of Clarke as captain, the batting of Warner (though he had a fair share of luck today) and the seamers are a real strength.

AK84, I believe Tendulkar is probably a better batsman than Dravid (this of course is opinion) and both are very good. In 20 years time though if we look back, we will not see a batsman that totally dominated a decade or made huge scores. Tendulkar has disappointed me in his unwillingness to address controversies (such as the unpleasant Test a few years back) but rather roll with the party line. As a batsman extremely good, he failed as a captain and also in supplying leadership.

BTW if anyone is interested, I think the best batsman I have ever seen was Richards. Barry that is, not Viv. And Mike Proctor was probably the best all rounder.

Cicero - I reckon two of the deficiencies that you’ve highlighted are not massive problems - as long as your wk is not shelling easy chances, it seems that it’s comparatively good enough to have someone who can score a few runs behind the stumps, rather than an excellent gloveman who can’t bat. Arguably, the best wk in tests at the minute is Matt Prior - which just goes to show that you don’t need to be too good with the gloves to be better than the rest of the world! Equally, I wouldn’t be too concerned about the lack of a spinner until you hit the sub-continent. The standard of spinning in world cricket isn’t too high - again, arguably the best spinner in world cricket is Graham Swann, who doesn’t have a whole heap of mystery about him. If you can find someone who can tie an end up and spell your pacemen, you’ll probably be OK in most conditions.

I’ve done a bit of digging on your batting order and I reckon that is the main area where Australia needs to improve to get right back on top. I still back Hussey, as I’ve done elsewhere, but you could definitely do with some younger talent coming through. It will be interesting to see what happens when Watson comes back to open the order with Warner. A 3 seems to be the main hole and you could probably do with a 5/6 sooner rather than later to replace Hussey. I think you’re going to be fine though - for instance, Khawaja strikes me as a player who is going to get it right sooner rather than later.

Impressed with the pace bowling coming through for Australia though - there was an awesome article up here in one of the papers talking about all the decent young seam up bowlers coming through around the world and I can see Australia having a very good pace attack in the coming years.

Cumbrian, I agree with all you say.

One point I would make is that getting a top notch spinner is far more difficult than a pace man. If you revist the 20 th century there are many servicable spinners, but I think the really deadly ones would be in single figures. I’ll toss in a few (and I am thinking of guys dangerous on most places):

You forgot Abdul Qadir. And Saqlain was for about 5 years next to impossible to play. Lance Gibbs should be there as should Chandrashaker and Bedi.