Indoor visitor - fan or no fan?

If you are visiting someone indoors w/ the AC on, does it provide extra protection or increase the risk to have ceiling or other fans going.

I didn’t know if fans would disperse particulates, or increase the chances of coming in contact with them.

It likely depends on the airflow. If the airflow is such that air is blown from one person to another, then the person downwind would be at higher risk. But if the airflow is perpendicular so that the breath of each person is blown away from both people, then it would be safer. Ceiling fans just circulate the air, so that might be more problematic. And you want to make sure your AC filter is a high enough rating to filter droplets.

You could get a HEPA room air purifier to help pull virus out of the air, but you’d still need to be concerned about the airflow and make sure no one is downwind. Put the purifier so that it pulls air in perpendicular to the people rather than being behind someone.

There was an early case where someone in a restaurant infected 9 other people because of the AC airflow, so it definitely can be a concern. Keep this in mind for anyone returning to work at an office that they need to be aware of the airflow patterns. 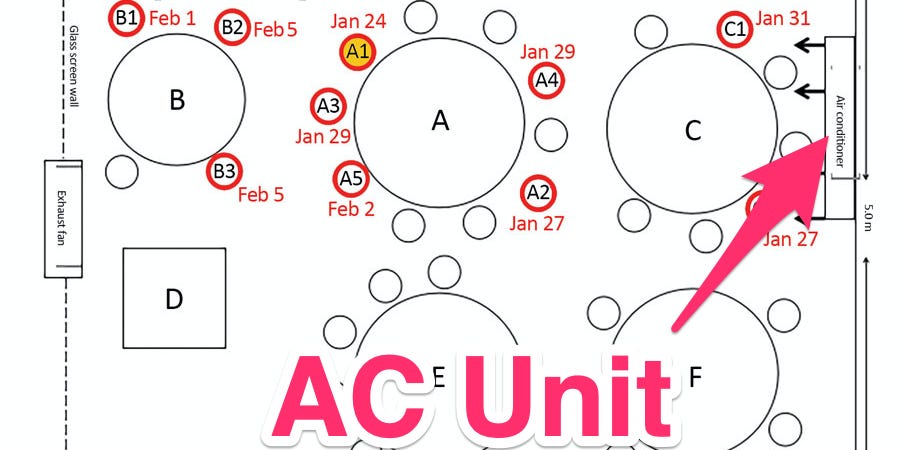 This picture shows how 9 people in a restaurant got the coronavirus thanks to...

According to a scientific paper, restaurant AC boosted the distance that virus particles could travel form an infected diner to other people.

That’s tough. I would think it is not clear.

If you have a visitor in a smaller room but you are sitting farther apart, then I would not want the fan. Let gravity work and as many particulates hit the floor due to our large separation.

But if you are going to be close together in larger room, then I would think air circulation is good to dilute the particulates traveling between you two.

Thanks. I heard something on the radio the other day that commented that outdoors is better because the particles are dispersed. I thought if people were in one room of a house (distanced from each other) a fan might essentially “enlarge” the room by exchanging air w/ the rest of the house.

One thing I don’t fully understand is why the rate of household infection is relatively low. It seems like it’s in the range of 10-20%. I would think that people in a household would spend sufficient time together that infection would be inevitable regardless of any airflow issues, but that doesn’t seem to be the case.

Don’t leave a fan on overnight in Korea.