Does subsonic sound cause acute anxiety?

Infrasonic sound, to call it by its right name, has some effect on human “hearers,” although it falls a little short of “acute anxiety.” The frequency range of normal human …

There are some indications that infrasound can cause weird feelings, even suggest ghostly apparitions. Here are some excerpts from articles:

A Different Kind of Ghost Story
By Caroline Kraus and Paul Morledge, Britannica.com

Called “infra-sound,” or infrasonic sound, which is defined as sound waves with a frequency lower than 20 Hz …, this particular pattern of energy can cause a number of ghostly effects, from a cold spooky breeze to breathlessness and rising feelings of fear, with excessive perspiration and shivering.

The physiological effects of infra-sound were studied and recorded by NASA scientists in the mid-1970s, and they include watery eyes, visual distortion, increased muscle tension, quivering in the extremities, and a heightened sense of impending death.

(about the haunted house that Richard Wiseman is building)

Unearthly vibrations created by infrasound are also reckoned to be capable of inducing hallucinations or feelings of unease. Wiseman is keen to have it in his arsenal of tricks. “It’s a subtle form of vibration, and can make candles flicker, for example,” he says. “And believe me, it does feel odd.”

From the E-Skeptic Newsletter of September 22:

By Jonathan Amos
BBC News Online science staff, in Salford
(This article from the BBC News Online is on how church organs may trigger feelings of spirituality in church attendees)

But in a controlled experiment in which infrasound was pumped into a concert hall, UK scientists found they could instil strange feelings in the audience at will.

These included an extreme sense of sorrow, coldness, anxiety and even shivers down the spine.

So, infrasound appears to be able to generate feelings of anxiety and more, unlike what Cecil reports in this Straight Dope Classic. Well, things have changed since June 1975.

The statement that “In nature, infrasonic waves are produced only by earthquakes” is incorrect. Some animals, including elephants and whales communicate (partially) at infrasonic frequencies.

So, infrasound appears to be able to generate feelings of anxiety and more, unlike what Cecil reports in this Straight Dope Classic. Well, things have changed since June 1975.

I reread that classic, and I didnt see any place where Cecil poo-poohed the effects of infrasound.

Also note that the NASA studies you refer to were probably about the effects of massive amounts of infrasound, as generated by, say, the burning of several tons of kerosene and liquid oxygen per second in a Saturn V booster.

One would be surprised if there wasnt a bit of anxiety generated by the infrasound, even if you could separate it from the anxiety of being strapped to umpty-ump million horsepower rocket, built by the lowest bidder, and test-driven exactly twice. You talk about sweaty palms!

Tigers also produce infrasound in their roar, paralysing their intended victim, making it easier to catch.

Remember, also, that for every action there is an equal and opposite reaction. The sound of a baby crying produces an emotional response in people, as do screeching car tyres (especially when followed by a muffled thump), music, laughter, gunshots and squealing brats.

It is thought that the thumping bass of Techno music creates positive feelings in ravers, heightening their experience. It’s certainly pretty wild to feel your chest cavity pumping and buzzing in rhythm with the beat.

I only posted some excerpts from the listed articles. The full texts answer most of the comments and remarks. The infrasound communication of elephants is mentioned in one of them, but then to elephant ears this is no infrasound, only to human ears. Similarly some of the large whales use low frequency sound in water to communicate, sometimes over very large distances, but since infrasound means “sound with frequencies below the human hearing threshold in air”, it may not be appropriate to call this “infrasound”. Isn’t this a form of “specism” or anthropocentric reasoning

? Anyway, to human ears these sounds are indeed infrasonic, as j|jiraffe reports.

Professor Richard Wiseman is a psychologist, skeptic and well-known magician, who uses this phenomenon and others (almost imperceptible draughts of air, magnetic fields, …) to create a haunted mansion. He plans to use it for research on the causes of spooky feelings in people.

Regarding the NASA research I have no idea at which intensities these tests were done, since I have no reference of the original article. The organ music mentioned in the third article will certainly generate audible sounds with an infrasound component of considerable intensity (but not as much as a departing rocket). The other examples used relatively low intensities. In the first article the infrasound is finally traced to an unbalanced fan which excites one of the basic resonance frequencies of the room. High intensity infrasound was used in a few movies in the mid-1970’s, such as Earthquake. This was called Sensurround. Such high intensity infrasound excites many of the resonance frequencies of the body, typically ranging from a few Hz to about 30 Hz. The low frequency beat of modern dance music may does something similar (you can feel your body vibrate) but I guess the sometimes “hallucigenic” effect is caused more by the constant beat, rather than the resonance of the body through infrasound.

Anyway, my point was: Cecil’s classic was apparently written back in 1975 and some more research was done in the mean time. This has shown that imperceptible (“subliminal”) infrasound can cause feelings of anxiety or of a ghostly presence in test subjects.

And what about the clean non-lethal weapons using sound and light? Any idea is they’re using infrasounds?

There were two interesting pieces on this subject by a fellow called Monte Thrasher in Experimental Musical Instruments magazine a few years back: see EMI vol 14, #1 (Sep 1998) and EMI vol 14 # 3 (Mar 1999).

Thrasher reports on experiments he and his associate made on themselves using an infrasound generator that had, supposedly, been built in the 50s by zoologists for reproducing the infrasound calls of elephants. Thrasher, too, found that different frequencies produced different emotions such as sadness and anxiety. He says the eerie effect lingered, making them hypersensitive to infrasound, such as that emitted by a passing truck, for hours. Unfortunately, the machine broke and they could not repair it. All in all, it sounds like fun.

Also, Thrasher suggests that infrasound might explain the phenomenon of calm before a storm, or calm in the eye of a storm; sounds not altogether implausible to me.

If you want to play around with abnormally high and low frequency sound yourself, there is an album by the Flaming Lips called Zaireeka that has one track with tones as low as 7 hz and as high as 14khz. This album does have a very creepy effect, although not just this track in particular. The album comes as four CDs meant to be played simultaneously. The weird music/ lyrics/other sounds going in and out of sync from different directions has just as an unsettling effect on me as the infrasound tracks do. A fun listen, though, if you can get 4 cd players together at once.

Let’s see… an 11hz sine wave should be easy enough to program into my sound card, I could feed that into my stereo and turn the speakers into the wall facing the porch steps… Hmmm…

You know, I might get a lot of candy to myself this year!

This makes me wonder about the nature of sound.

Isn’t sound made by oscillating something?

I always imagined that the waves produced were compression waves, and that the pitch was determined by how many of these go by in a second. Isn’t that the Hz number?

If this is all true it would seem that at 2hz or maybe 4 hz should sound or feel like a string of pops.

You’re right in what you said, and perhaps this would fill in the gaps. 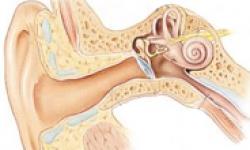 Ears are truly extraordinary organs and hearing is a fascinating process. Ears pick up all the sounds around you and then translate this information into a form your brain can understand.

A block wave (where the pressure rises and drops suddenly) can sound like a series of pops at low frequencies. This would actually not be infra sound anymore, since you need lots of higher (and very audible) frequencies to make such a block wave (it is actually a superposition of many frequencies, all marching nicely in sync). Usually the pressure rises and drops smoothly, in what is called a sine wave. Such a wave cannot be heard by our ears when the pitch is too low.

The lowest frequency or pitch that we can hear is about 16 Hz, or 16 beats per second. So, it’s difficult to imagine what infrasound would look or feel like. But some parts of our body vibrate or “wobble” at those low rates. High intensity, low pitch sound waves can set these in motion. That’s the way humans can occasionally perceive infrasound.

You can actually make low frequency sounds quite easily - just wave your hand back and forth. You can do that at a few Hz or beats per second. The only problem is that you don’t hear or feel anything and it quickly gets exhausting (and boring). It’s really difficult to get the air to vibrate at these very low frequencies. That’s why most loudspeakers are not effective when the pitch goes down. So, generating an 11 Hz sine wave on your PC is one thing, but getting it from your stereo system through your loudspeakers in the air is another.

Mind that there are still much lower frequencies. You could look at the variations in atmospheric pressure with changing weather as a very low frequency sound, with a pitch of say 1 cycle per three days.

Kempis, 2 Hz wouldn’t sound like a series of pops - if it pops, there are frequency components in your hearing range. Imagine a looking at a speaker cone that’s moving smoothly towards and away from you twice per second. You wouldn’t hear anything, but if it was really large, and/or had a great travel distance so that it moved a lot of air, you could feel the pressure as the air moved past you.

This summer, i actually took part in an experiment in infrasonic sound at the Royal Festival Hall. Basically, every one in the room was subjected to infrasonic sound when listening to music. We had to fill in questionaires as we went along so that the results could be measured. As far as i know it was the first really big experiment into infrasound in the UK. Check out the link