A wider cylinder (bore) can have larger valves, so more fuel and air can get in, producing more torque. However, a longer cylinder (stroke) is more efficient, because more heat from combustion is captured as work. A larger piston is more difficult to move fast, so the larger cylinders mean a lower maximum RPM. All of these things are trade-offs, and also not the only thing that changes torque, power, and maximum RPM.

Jason explains it better than I ever could. 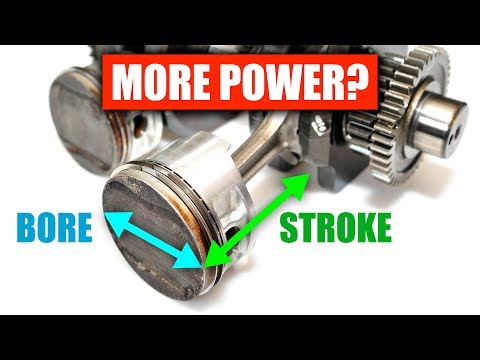 My current car, a 2016 Japanese-made sedan, has a 3.7-liter naturally-aspirated V6 and makes 330 horsepower.

I believe for lower RPM diesel engines the balance of the 3 cylinder engine is very effective in reducing vibration.

Ah. Well, both the engines I have had maxed out at about 2300 RPM. My car, meanwhile, spins about that fast on the highway – and I don’t speed, this is at 65 mph.

The VW Bug engine is sort of a V4 in that two pairs of cylinders are in two banks – It’s just that the angle is 180-degrees.

A flat engine, also known as a horizontally opposed engine, is a piston engine where the cylinders are located on either side of a central crankshaft. It is effectively a V engine with a 180-degree angle between the cylinder banks. A flat engine should not be confused with the opposed-piston engine, in which each cylinder has two pistons sharing a central combustion chamber. The most common configuration of flat engines is the boxer engine, where each pair of opposed cylinders moves inwards an...

From what I understand nowadays one can buy a minivan with as much horsepower as a 1964 GTO.

My first car was a late 1980s GM beast with that same 3.8L V6. By then it was up to something like 165 hp. I think the difference was they had given it fuel injection by then. But now there are naturally aspired four cylinders making similar power.

The Honda normally aspirated production engine was producing about 124 BHP per litre.

The Brabham BMW engine used in F1 racing during the mid 1980s used turbocharging to generate approximately 1500 BHP from a 1500cc straight four or 1,000 BHP per litre. The engines were only used like that for three laps: An out lap, the actual qualifying lap and if the driver was lucky the engine would last the in lap. The engines had an operational life of less than ten miles.

Based on cars I’ve driven: The 1966 Ford had a 3 speed gearbox. The engine was detuned to give a flat power curve, and ran at a couple hundred RPM. The 2014 Mustang gets more power by running at higher RPM, and is tuned to have a sharper power peak at higher efficiency – which is mitigated by a 5 speed gearbox.

The smallest cylinder displacement I’m aware of on a mass-produced vehicle is the BMW K1600 motorcycle , which is fitted with a 1.6-liter transverse I6 engine: just 0.267 liters per cylinder. I’ve ridden this bike before, and it’s smooth and powerful.

Don’t forget about flat plane V8s like the one in the present day GT350 and a few older Ferraris.

GM chose to build their V6 on the tooling for the V8 so they were 90 degree engines. Damn they could be harsh.

Some of the worst of the late 70s engines. And also some of the best.

In a couple cases they created what they called the “odd-fire V6”. Just take a V-8 and lop off the back 2 cylinders. Do the same surgery = butchery on the crank & camshafts, and leave two spark plug wires off the distributor cap. So around 2 full rotations = 1 complete cycle it went “bang bang bang pause bang bang bang pause”. The pauses being where the two missing cylinders would have fired had they existed. Could shake your fillings loose.

Not long after they invented the “even fire”. Take the same block, carb or FI, and valve gear. But replace the crankshaft with one where the 6 pistons’ motion is equally spaced around the 720 degree complete cycle. So each cycle was “bang bang bang bang bang bang” evenly spaced. Enjoying the excellent natural balance of 120 degree intervals. Of course the camshaft, and distributor cap were tweaked to match. Much better engine with only 3 non-interchangeable parts.

I had an even-fire normally aspirated 231CI carbureted engine customed up with some improved valve work & pistons that put out 250 HP. Over 1HP/CI was pretty mongo for the day for a streetable car. Not record setting by a long shot, but still impressive. In a 2000# car it flew. And was sweet-smooth doing it. Loped a bit at idle, but you’ll have that .

Aah, the joys of a youth misspent gearheading. Had I invested that money in the S&P 500 I could have had a 70 foot yacht today instead. OTOH who needs a stupid yacht?!/!!1!???

Our Saab 9-2X has the same horizontally opposed 4 cylinder ‘boxer’ engine as the WRX. With Turbo it makes 227 hp with 2L. Back when the car was new, that was a really good number for a 2L engine.

Those engines are nearly indestructible. Subaru tuned the engine up to 342 HP in the WRX WR1, and some people have pushed enough boost to get 400 hp out of the little engines, and they just keep on ticking. They burn a lot of oil, though.

Some of the worst of the late 70s engines.

I think the aluminum 2300 block engines in the 70’s era Chevy Vega could compete for worst engine. With 2.3L it made anywhere from 70 to a whopping 110 hp. That is, before it would shut itself down because of overheating or low oil pressure, and while it was new before it started to blow oil over everyone behind it. You could always tell a Vega was ahead by the clouds of noxious blue smoke in the air.

GM warranted the engines for 50,000 miles, and took a huge hit on warranty claims. The aluminum, sleeveless block was just ahead of its time.

The aluminum, sleeveless block was just ahead of its time.

Truer words were never spoken. GM had forgotten how to engineer other than “more of the same”. A painful lesson we all got to suffer through.

Part of me wants to fiddle with stuff like @Sam_Stone says: the WRX WR1, etc. Part of me is glad I’m not still into it. I’d have to buy a shop if I was serious. Decisions, decisions.

The distinction is cylinder displacement, not total engine displacement. In the 1970s Honda has a 350cc twin and a 350cc 4-cylinder, and I remember everyone that worked on the 350/4 thought the cylinders were hilariously small.

With all the extra stuff that goes with each cylinder (cams, valves, plugs, injectors, etc), engineers are rarely willing to use itty-bitty cylinders like in the K1600 when you can use fewer, larger cylinders. Especially when you have to consider space and weight.

Someone at BMW really wanted a smooth-running bike.

In the 1970s Honda has a 350cc twin and a 350cc 4-cylinder, and I remember everyone that worked on the 350/4 thought the cylinders were hilariously small.

Think about Honda’s 1964 GP bike then! 250cc 6 cylinder! Talk about thimbles for pistons…

Yeah, but … Those 6 cylinders are each larger than a 250 thumper. I don’t think your point is clear. Perhaps you meant “…in a multi-cylinder engine”?

No, they aren’t. Again, you seem to be focusing on total engine displacement, not cylinder displacement, which is what the Machine_Elf was talking about originally. The cylinders/bores in a 250cc 6 cylinder are going to be a lot smaller than cylinder of a Suzuki TU250X 250cc thumper. The 6 cylinder in the BMW K1600 is the narrowest inline-6 in history thanks to its teeny-tiny pistons.