The smallest cylinder displacement I’m aware of on a mass-produced vehicle is the BMW K1600 motorcycle , which is fitted with a 1.6-liter transverse I6 engine: just 0.267 liters per cylinder.

It only made 130 HP, but it was probably a lot smoother than the competition.

Remember When Mazda Made a 1.8-Liter V6?

Relive the glory days of the 1.8-liter V6-powered MX-3 in this delightful MotorWeek review from 1992.

Fair point. I was thinking of multi-cylinder engines (which is relevant to the OP’s inquiry), but even there I blew it: there are countless four-cylinder 600-cc motorcycles out there (0.15 liters per cylinder).

Eh? No, that’s precisely the opposite of what I’m focusing on. I never said anything about a 250cc 6. My point was that fun as six 264cc bores are, they’re a lot bigger than a 250, 125, or 50, and the thread was about “The smallest cylinder displacement I’m aware of on a mass-produced vehicle”. If this were “…on a current, multi-cylinder, mass-produced vehicle”, it would make sense.

And now I feel like I’ve gone off on a nitpicky pedantic tack, when I really, honestly was just curious what point Machine_Elf was intending to make.

My first, second, and fifth bikes were 1978 CB400 Hawks. The 400A, though? That sucker was slow as molasses in January. I came back from the test ride outraged that a motorcycle could be that slow…

I sure didn’t know the difference in any case: my previous vehicle was a ten-speed, and my dad was driving a 1972 Volvo 145 wagon, which could generously be described as “pokey”.

The 750 was a lot more fun! At the time, its quarter-mile speed in the low 12s was impressive, though nowadays you can beat it with a mass-market sedan. Still, that was a good bike.

My bike, a Kawasaki KLR. 650, goes the other way with one large 650cc cylinder. It has some advantages, such as not having to synchronize two carbs. It’s actually not that thumpy at speed, either. Butbit’s about as simple as an engine can get, so it’s supervreliable and easy to repair in the field if necessary, which is what a KLR is all about.

Just don’t expect it to win any races.

The aluminum, sleeveless block was just ahead of its time.

Truer words were never spoken. GM had forgotten how to engineer other than “more of the same”. A painful lesson we all got to suffer through.

They also had the all aluminum 215 ci BOP V8 (Buick, Olds, Pontiac). They were really neat looking. I had several of them that came with a sports racer. I had numerous manifolds up to one that used a pair of Carter AFB 4 barrels! GM gave up on it from the problems and sold the rights to Rover who managed to make a go of it.

That engine is a classic case of

I coulda been a contendah!

But for lack of corporate interest in making it work well, not just barely.

@LSLGuy My Focus ST comes stock with 252 hp out a 2L turbo. It’s also one of the easiest to mod cars I’ve ever seen. Just a tune and a set of plugs bumps up the torque and hp numbers a good bit, but with about $5k in parts (Big turbo, intercooler, downpipe, water methanol injection, limited slip diff, intake, a few suspension bits) it can be a reliable 400 whp daily driver and a track monster. The only real downside is wrong wheel drive but it’s the most fun car I’ve ever owned, and the easiest to work on.

Thanks for the recommendation. Those numbers are friggin’ amazing.

The ST was a great car, but I think there are diminishing returns as you add HP to a front wheel drive car that is that light. At some point around 300-350hp, the extra cost of the AWD Focus RS looks like the better deal to me. YMMV

Oh, I would have loved to get an RS but it just wasn’t worth the expense and headaches of the 2.3 vs the 2.0 engine. A bunch of people on the Focusst.org site are running setups like this with no issues, but you’re right in a way. Anything beyond 375-400 is just bragging rights. 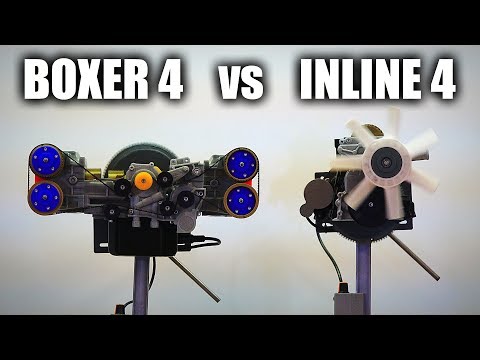 Porsche has put a flat-six in several of its cars over the yeras.

For the last 30+ years, the Honda Goldwing motorcycle has been made with a flat-six engine.

Yep me too, an Outback.

Yep. We have a 2L turbo boxer 4 in a Saab 9-2x. One of the advantages of the boxer is that it has a low center of gravity, which makes the vehicle handle better.

Ours consumes a lot of oil, though. That’s common in Subaru boxer engines.

GM had a successful all-aluminum (except for cylinder sleeves) V-8 in the early sixties. It was available in certain Buicks, Olds, and Pontiacs. It even was available in a turbocharged form. It didn’t sell well, so they sold the thing to Rover who used it in Land and Range Rovers until 2006.

Porsche has put a flat-six in several of its cars

Oh yeah, I almost forgot. I guess someone has to remember the Porsches. (JK LAWL)

Ours consumes a lot of oil, though. That’s common in Subaru boxer engines.

They all have terrible head gasket problems not to mention a tendency to leak oil from various random places. I had my Impreza’s head gaskets replaced at about 190k miles; the other car is only at 130k and hasn’t yet needed the head gasket job. (Yes, there are two per engine, yikes.) Interestingly, our multi-year oil leak on the Forester turned out to be from an o-ring on the oil cooler, which the mechanic refreshed recently. So glad it wasn’t the head gasket…yet.

Is that the Saab whose engine was made by Subaru? Or was the entire car a Subaru deal? I think my neighbor had one of those.

The entire car is a Subaru WRX, made on the WRX line, but with a number of Saab improvements such as more lightweight aluminum suspension pieces, upgraded interior, an STI steering rack, a NACA scoop instead of the snorkel scoop on the WRX, a different design in the rear body panels, and few other bits - most of which made it to the WRX in the next few years anyway. Ours is a 2005 with only about 90,000 km on it, and it still looks and drives like new. We could afford a new car, but my wife loves her Saab too much to part with it.

They are pretty rare. The turbo version only sold a few hundred copies in Canada before Saab pulled the plug on the project. I have no idea how many are left.