Hate Speech – Do not post hate speech directed against any race, religion, ethnicity, nationality, or gender in any forum. (Bolding mine.)

In the thread about the recent Supreme Court decision, we got this nasty comment:

I mean, one could come up with equally vile things to say about Muslims or Jews; would they also get a pass as merely inflammatory, and asked to take it to the Pit? Allegedly, the hate speech rule applies across the board, including the Pit.

I would submit that in context, the comment was intended to be read as a statement of traditional USA Protestant attitudes about Catholics, rather than the poster’s attitude.

Though it could have been better worded to make the association explicit, it’s not a bad description of how many Protestants, especially those on the more fundamentalist side of things, have in the past referred to Catholics in the US.

Certainly a poster should be able to describe Nazi attitudes toward Jews without the result being considered hate speech on the part of the poster.

Given the ambiguity in the statement, I think a modnote was appropriate.

In context, it was definitely a claim about how some Protestants might think of Catholics. If anything, it was more a slur against Protestants than Catholics.

OP, did you see the context?

Having been a member for 21 years, it’s always been open season on Catholics here.

I think the rule about using hate speech is a good one… but.
If we’re not allowed to post the ugliness that bigots actually believe in the ugly words they use if makes exposing that ugliness rather difficult.

I sincerely apologize to anyone that found those words offensive.
But be aware that that is what some Christians think about Catholics . . . and that hatred is only slightly less for the ‘’‘wrong’‘’ flavor of Christianity their fellow Protestants follow.

So, where’s the line between criticism and hate? The bulk of the anti-abortion argument has been based on religion and the SCOTUS decision codifies Catholic Church doctrine. Perhaps it is just a matter of phraseology.

My thoughts is a lack of link is rude, lazy or even deceptive.
The lack of context (as in the entire quote) is bordering on a warning as it is effectively misquoting.

I will be flagging this for review.

Yup, first the non-barrier methods, then the Protestants will find common ground with the evil Papist ring kissing Mary worshipers and then all artificial contraception will be declared intrinsically evil since they usurp God’s will that the daughters of Eve be punished for their Original Sin.

I think it was pretty obvious that the post was meant exactly as @RitterSport explained above. I think @Aspenglow’s modnote was quite appropriate in handling it.

So, where’s the line between criticism and hate? The bulk of the anti-abortion argument has been based on religion and the SCOTUS decision codifies Catholic Church doctrine. Perhaps it is just a matter of phraseology.

good question, I’m not convinced there has ever been a good definition been put forward that would allow any reasonable people to make that distinction with any agreed accuracy.

At the very margins we all probably recognise the egregious examples and can say with certainty when it is not present. But in the messy middle ground such as we are talking about here, hard to do. And the definitions don’t really help.

Yeah, really at the most we’re dealing with whether we’re going to expect that when we refer to someone else’s bigotry we must just plain and simply totally avoid the very words, or always style it in the form of a distinct quotation with a disclaimer and trigger warnings, or, y’know, expect us all to read context and not have to worry that someone will try and pull a whataboutist nutpick because five words showed up.

And yes, sure, it is true that the institution of the RCC is something of a favorite whipping boy around here but that tends to be earned by institutional decisions.

I tend to be more put off by posters who’d sneer at Catholic believers … or any believers really… for not having a revolt or not just quitting like changing religion were like changing your shirt. I know, I know… Religion is bullshit deserving of no respect whatsoever and it IS even less momentous than changing your shirt 'cause no Invisible Pink Unicorn etc. Fine, that’s like, your opinion, man. (BTW see what I did there?)

{…} or always style it in the form of a distinct quotation {…}

That didn’t work the other time I did this. Just using the words was enough.
I’d link but the post was edited. Someone said they were in favor of getting rid of public accommodation laws so I asked if they’d be comfortable living in a world where businesses had signs saying ‘Slurs not allowed’. That, apparently, was too much.

This cuts both ways.

Most religions are to some degree two things - a set of truth claims and an ethnic/cultural identity. Critics of religious truth claims must take care to distance themselves from bigotry against the identity;. but believers should not seek to shield their bad ideas from criticism by mischaracterizing criticism as bigotry. And most religions have a sordid history of oppression of anyone who disagrees with their ideas when they have the power to do so.

Most religions have a sordid history of oppression of anyone who disagrees with their ideas when they have the power to do so.

Factually I believe this to probably be false, over the course of history. There have been thousands of religions, and only a few have become vehicles for violence, although more might have come along for the Othering ride.

There have been thousands of religions, and only a few have become vehicles for violence

Sure - but religious truth claims are largely false, so out of those thousands of possible religions, most major religions that survived and flourished did so not through having better ideas, but through oppression of nonbelievers.

The process is directly analogous to viruses that survive not by virtue of encoding traits that are beneficial to the host organism (natural selection for host fitness), but by subverting the replication mechanism and forcing the host to make more virus.

If you have good ideas, you do not need to shield them under the umbrella of religious dogma, they stand on their own merits.

Not really relevant to this topic, however.

There’s a useful distinction: attack the idea, not the person (or culture, in this case). You can critique religious beliefs to your heart’s overflowing content, but attacking the identity is the part that verges on hate speech. They are separable, and need to be, if civility can be maintained.

Not really relevant to this topic, however.

It’s relevant to place all this in context.

Yes, as I said, those who criticize religious truth claims have a burden to carefully distinguish criticism of the ideas from criticism of the cultural/religious identity that is often almost inextricably interwoven with the ideas.

But religious believers are far more guilty historically of obfuscating this distinction to protect or promote both their ideas and their identity at the expense of others. And don’t imagine that we’re just taking about ancient history and the medieval Inquisition. 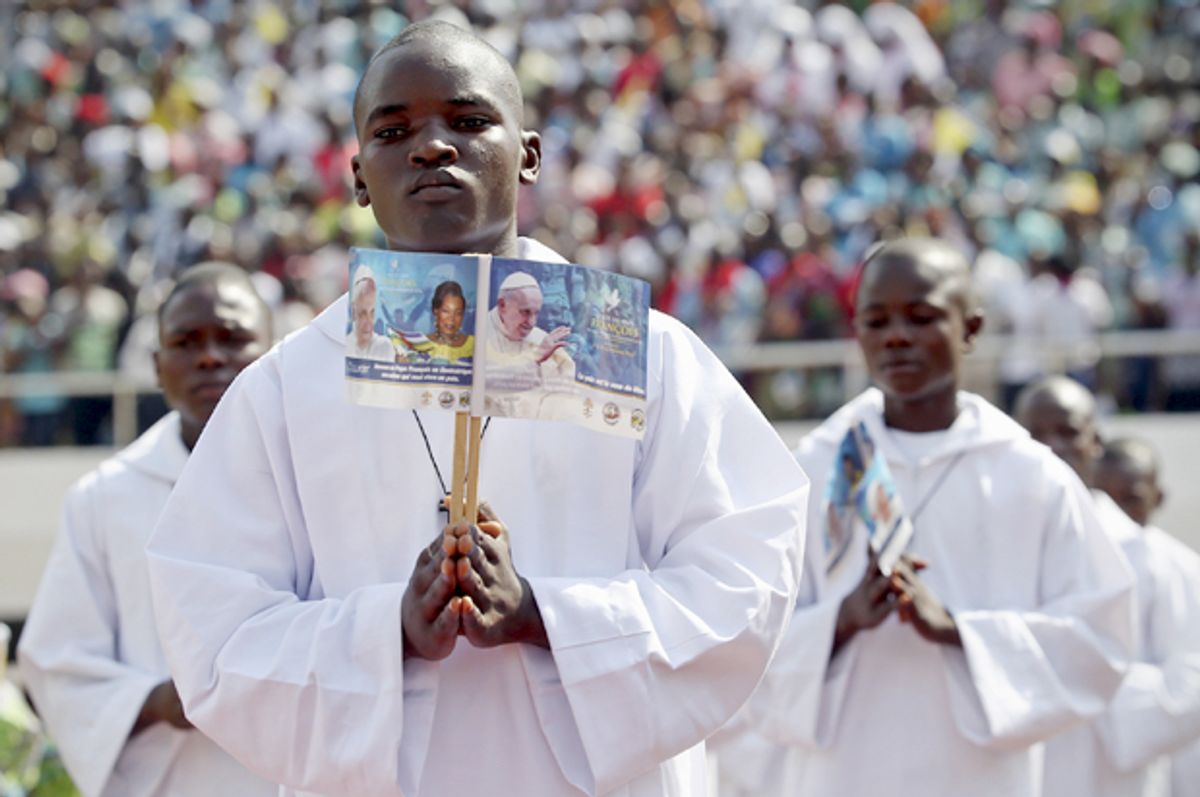 In this context, just how hard are you going to come down on someone who gets so angry about this that they make the mistake of saying “Catholics are assholes” when what they should really be saying is that “the promulgation of certain superstitious Catholic beliefs (not held by all Catholics) is killing thousands of people”?

just how hard are you going to come down on someone who gets so angry about this that they make the mistake of saying “Catholics are assholes” when what they should really be saying is that “the promulgation of superstitious Catholic beliefs is killing thousands of people”?

I will always oppose lazy and careless argumentation and ad hominem. “It really makes me mad” doesn’t justify it. Frankly, neither does the horrors inflicted by an indeterminate proportion of those holding that identity. What’s the difference between “Catholics are assholes” because of those atrocities, and “Muslims are assholes” because of the variety of horrors inflicted by a small minority of those who self-identify as such?

I will always oppose lazy and careless argumentation and ad hominem.

Yes, careless argumentation is the worst thing. The second worst is hypocrisy. (A distant third is the deaths of thousands of people.)

Well, it certainly makes a difference whether it’s really a small minority (as is the case with violent Islamism), or whether it’s official Church doctrine advocated by the universally acknowledged leader of the religion to whom the great majority of adherents of the religion defer.

Personalizing the attack is always a mistake and a waste of energy. If you can’t constrain your feelings, maybe you shouldn’t be involved in the discussion, because it just makes it worse.

If you can’t constrain your feelings, maybe you shouldn’t be involved in the discussion

And if you cannot distinguish between someone who is speaking about the degree of opprobrium appropriate toward someone who hypothetically cannot constrain their feelings, and someone who actually cannot do so in this thread, perhaps you shouldn’t be involved in this discussion.