Has he ever had an IQ test? What were his grades in school? Is he able to carry on an intelligent conversation?
The common perception is that he is not too bright. Obviously, this has been propagated to some extent by late night television etc. A book I picked up claims that he is quite intelligent (can’t think of the title) and all the bad hype about him was created.
As a related question could a mentally challenged person (such as in the movie Being There) make it to become president of the US? How dumb can you be and still hold this office?

He’s been a fighter pilot and has an MBA from Harvard. You don’t get either of those by being dumb. I don’t think he comes across very well speaking, he’s not that eloquent, but he didn’t get this far by being dumb.

I’m not sure if GQ is the right forum for this, as it’s doubtful anybody can supply a definitive answer to either of those questions. My impression about GWB is that he’s not stupid, but is intellectually lazy, and that his thinking is narrowly restricted to avoid him having to deal with uncomfortable questions. I’m no expert, but the suggestion that his behavior is typical of an untreated addict makes sense. (That’s something that’s baffled me for the past six and a half years – the Republican party is so anti-drug, but we never hear a goddamn word about the President of the U.S. quite possibly being a drug addict.)

As for how stupid somebody could be and still get elected – well, with an evil genius like Karl Rove as the puppetmaster, the candidate doesn’t have to be that smart. He does have to be able to maintain a grueling campaign schedule, speak as if he’s capable and confident, and stay on message. Normally I’d say he has to be telegenic, but Bush seems to refute that (at least, I’ve always found hiim uncomfortable to watch because he seems awkward, twitchy and smirking, but that’s just my impression).

It also appears that quite a few voters don’t like candidates to sound smart. Or certainly not pedantic. People are idiots.

ETA: When Bush was running for governor in 1994, he sounded smarter than when he was running in 2000. More complex sentences, longer paragraphs, and sharper in debates. I don’t know if he lost brain cells in the interim, or deliberately dumbed down his presentation. I do know that I got sick pretty damn fast of the POTUS speaking to me as if I were a slow-witted child.

Dumb Friends League Denver is an animal shelter that rescues animals & offers animal adoption. Our rescue dogs, cats, and other pets are looking for homes!

It seems the primary belief (policies aside, if you are against them) stems from his lack of articulation when speaking publicly. He does quite well when “shooting from the hip”, but not so well when it comes to a carefully worded statement. (as most made by a President are) The debate with Kerry when he asked him if he “wanted some wood” snicker comes to mind.

I would compare it to how you post something in MPSIMS, as opposed to Great Debates.

While the OP does include a couple of factual questions, I can’t see a thread with the title this one has being able to remain in GQ for long. I’m going to send it to GD.

What’s that? Colibri’s a moderator now? That sucks…we need you posting, not moderating.

As for the substance, George Bush isn’t stupid under any normal definition of the word. Sure, he’s no genius but neither are most people. George Bush only looks stupid when we compare him to past presidents, top officials and other world leaders. He’s smart compared to an average guy on the street, but that isn’t exactly a ringing endorsement for a guy who’s supposed to be president.

[He] has an MBA from Harvard. You don’t get [that] by being dumb.

Yeah, you get it by having connections.

Has he ever had an IQ test?

I’m sure he has. I doubt he was below average…but I’m not sure what you think this means one way or the other.

What were his grades in school?

A bit better than average. Again, not sure what you think this actually means.

Is he able to carry on an intelligent conversation?

The common perception is that he is not too bright.

What do you think this actually means? Are common perceptions a fool proof way of determining…well, anything?

As a related question could a mentally challenged person (such as in the movie Being There) make it to become president of the US? How dumb can you be and still hold this office?

It is highly doubtful that an actually mentally challenged person could become president. As to how ‘dumb’ one could be and still hold office, I have no idea how to even answer that as its probably subjective.
Bush is not dumb…where dumb is mentally challenged. He’s (relatively) highly educated and has skills in some very narrow, vertical fields (he was a fighter pilot for instance…not exactly a place for the mentally challenged). I think one could make a case that he’s intellectually LAZY, as well as intellectually un-curious. He doesn’t push himself.

Here’s a comparison of some of his speech from then and now, with a bit of commentary: 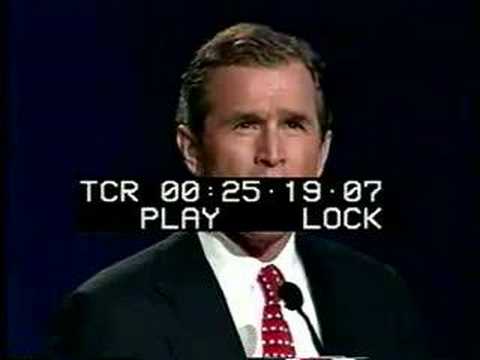 What’s this about him being a drug addict? What drug; are you saying he’s still on cocaine or alcohol, or something else? I thought I heard something about him taking antidepressants at some point, and those do change people in certain ways, but I don’t think I’ve ever seen one make a person act like he does, and seem slow. Multiple meds can cause a “brain fog” though.

As no fan of Bush, but even less of kerry, it is a source of good humor for me that at Yale they were both C students, with Bush’s GPA one point higher than Kerry’s.

It makes my day just typing it.

Has he ever worked hard to put food on his family?

Yeah, there’s no chance that being GB’s son had any role in him getting into Harvard, and a degree from Harvard, and as for how he became a pilot, not on merit-

Competition for the few openings in the National Guard was intense, and there was a waiting list of 100,000 nationally at the time. Bush took the Air Force officer and pilot qualification tests on January 17, 1968. He scored 25%, the lowest possible passing grade on the pilot aptitude portion. On his application form, he listed his “background qualifications” as “none.” But despite the waiting list, his low score and his lack of qualifications, Bush was given a highly-coveted spot and was sworn in on May 27 for a six-year commitment, taking a solemn oath to protect and defend the U.S. Constitution and the United States of America.

And if you really think Dubya could do better on any educational related test than John Kerry, who I don’t care for either, I respectfully disagree.

“he’s not dumb, he just not very good with the language he has spoken daily for 50 some years…”

If it were just he’s not good at public speaking, that would be one thing- its not. Its that he often has problems with simple subject/verb agreement. I wouldn’t speak in public on a dare, but if I did, at least I would use correct grammar most of the time. As to why a poor public speaker would get a job that demands it…

It’s odd how the media likes to grab the current POTUS or candidates for POTUS and stick a one word description onto them.

They never seem to be able to get out from underneath their moniker and it’s reinforced over and over in late night monologues, SNL, political cartoons, etc.

He’s been a fighter pilot and has an MBA from Harvard. You don’t get either of those by being dumb. I don’t think he comes across very well speaking, he’s not that eloquent, but he didn’t get this far by being dumb.

As I recall, he got a “gentleman’s C” ( which basicially means, ‘He’s rich, so give him a C even if he is barely bright enough to talk’ ), and a coddling in the NG. As for ‘not getting this far’, he’s failed at almost everything he’s ever done, and been bailed out by his familiy or the Saudis. Including being handed his first election by the Supreme Court. He’s an artifact of privilege and wealth, and could have ‘achieved’ everything he has if he was a potted plant. In fact the plant might have done better; more passive, less likely to screw thing up.

Personally, I think he’s stupid, and doesn’t use what little brains he has, and out of touch with anything but his yes-men, and is crazy to boot.

What’s this about him being a drug addict? What drug; are you saying he’s still on cocaine or alcohol, or something else?

It’s odd how the media likes to grab the current POTUS or candidates for POTUS and stick a one word description onto them.

They never seem to be able to get out from underneath their moniker and it’s reinforced over and over in late night monologues, SNL, political cartoons, etc.

And here as well- scroll down for the HUGE list of Dubya’s best oral flubs.

I think he’s average to low average in intelligence and that he’s probably got some brain damage from his alcoholism and drug abuse. He’s Ozzy with a Texas accent.

I presume the OP is asking if Bush is “stupid”, since we know he is able to speak, even if not very well. Probably the best objective measure available is his SAT scores: 566 Verbal, 640 Math. Not bad. That’s 1206 total, putting him in the top 25th percentile of those taking the test. n.b. That percentile data is based on 2006 data, so it might be slightly different for the time period when Bush took the test.

I don’t see him as lacking in intelligence. I think it’s his wisdom stats he rolled low on.