Is it racist to like Led Zeppelin's "The Immigrant Song"?

There’s a delightful version of this song in ancient Norse. Then I listened to original again and remembered how much I loved it as a teen. The original I linked to is actually the trailer for Ragnarok, which I didn’t see but looks very exciting.

The song especially with Robert Plant’s signature scream, is so warlike. Talks about invading, sweeping in like a hammer of God. Today’s news cycle is full of people also using this very same language in viciously destructive ways. And some whites-only organizations are very open about their embrace of Viking and Germanic heritage. So now I wonder if it’s OK to still like this song, or if it’s actually a racist song.

I think it is OK to like it, but even in Jewish hymns (I’m half Jewish, half German ancestry - hah!) there are verses about smiting one’s enemies, which given Israel’s modern-day conduct, are too warlike and xenophobic for me to want to sing those verses, at least not without careful thought.

I”m not clear on how the song could be considered racist. The closest things in the lyrics to any kind of ethnic reference is “To fight the horde, sing and cry/Valhalla, I am coming”. The song is certainly warlike, but then, the Vikings were a pretty ructious and belligerent group, albeit not any worse than many other Euroasiatic ethnic groups like the Huns and Mongols.

I suspect this question is not being asked in…let’s just say “good faith.” I’ll leave it at that.

Maybe more “colonist” and yes I am applying modern “antiracist” viewpoint to this song which is admittedly stretch. Also the violent language. Am I offended by the song now? No. I still love it as much as ever. Would I play it at a BLM rally? Nope. Would BLM supporters like the song? Maybe! Haven’t asked any.

To the person who said I was not asking in good faith. Yes I was. Maybe it needs to be in a different forum on this board, or the subject line is poorly chosen.

So now I wonder if it’s OK to still like this song, or if it’s actually a racist song.

I suppose people of Norse heritage might complain that it’s perpetuating racist stereotypes of the “savage” “bloodthirsty” “invading” Norsemen. But the history that gave rise to those stereotypes is so far removed from modern Scandinavian states and cultures that I don’t think those stereotypes bother most people of those ethnicities much these days.

I could see how a white English band making up a similar supposed invasion anthem for, say, the Mongolian troops of Genghis Khan could be seen as racist (“ooh those scary savage orientals!”). (Besides, there’s apparently a real one already?) But a white English band doing a song for medieval Norse viking invaders probably raises no such flags.

Is the Led Zeppelin song being embraced for racist purposes by neo-Nazi/neo-pagan racists as a sort of white-supremacy anthem avant la lettre? I wouldn’t be in the least surprised, but I don’t know.

Is the Led Zeppelin song being used for racist purposes by modern anti-immigrant nativists who pretend to associate modern immigrants with the song’s themes of violent conquest and domination? That also wouldn’t surprise me, but again, I don’t know.

Would either of those potential racist appropriations of the song make the original song in any way intrinsically racist (except possibly, as I said at first, against people of Norse ethnicity)? IMO, no it wouldn’t.

Could either of those potential racist appropriations end up irretrievably “tainting” the original song as it’s culturally perceived, so that it eventually comes across as a well-known symbol of racism, no matter how anti-racist an individual fan of the song (such as the OP) may happen to be? Unfortunately, yes.

Is the song currently so tainted in modern cultural awareness? Not to my knowledge, no, but I don’t know much about it.

TL;DR: The song doesn’t seem intrinsically racist to (non-Scandinavian) me, OP, but that’s no guarantee that it won’t ever end up getting culturally tainted/“cancelled” over racism issues. White supremacism turns everything it touches to shit, and a lot of white supremacists really like Viking-y stuff.

Vikings were a pretty ructious and belligerent group,

After so many years of hearing debates about “Baby, It’s Cold Outside” around this time of year, it’s just nice to have a discussion about a different song for a change.

Thank you for all that, it’s the sort of considerations I was looking for. I still like the song. There are a few people I wouldn’t play it in front of, that’s about it. But one of them is my Dad, he’s 89 and he only likes classical.

That was rather good.

Viking kittens are cool, just checked it out. There are TONS of renditions of this song on YouTube. Enough to keep a person busy for far, far too long.

That was rather good

I see what you did there. Also fun is Tomoyasu Hotei’s version. Not sure if it’s a cover or more of a remix.

I see what you did there.

Made me nostalgic for the internet of the past.

It’s a song about being a Viking. I don’t see how it’s “racist” or even particularly bigoted against either Vikings or non-Vikings. It’s not even saying “Act like a Viking” or “Vikings are better than non-Vikings” (comments about “overlords” notwithstanding). It’s just “We’re Vikings and this is what we do”.

And it remains an awesome song.

the Vikings were a pretty ructious and belligerent group 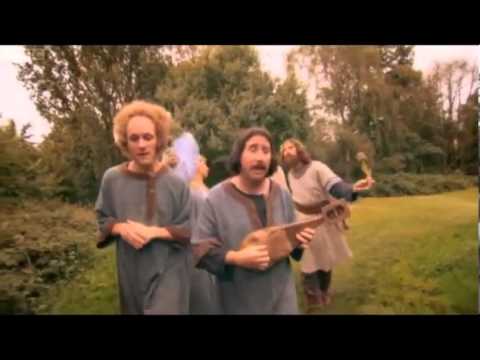 I probably hang out with too many woke people, where we debate about the language of violence and the colonial gaze; about de-colonizing our minds; whether black lives matter or all lives matter; and how we feel about white privilege, white fragility, and antiracism. What it means to have culturally safe spaces, and whether snowflakes should be left alone, scolded into toughness, or treated with tenderness and compassion. Whether racial diversity workshops do more good than harm. And so forth.

While I’ve educated myself on these topics to some extent, and worked out my own feelings and positions, sometimes worlds collide. And that is what happened when I heard this song. My 15-year old self who had loved Zeppelin and played it all the time, vs my 56 year old self.

I was listening to this favorite song after a long break of not hearing it or thinking much about it …and wondered “If I played this song for fun in front of this or that group of people, would they be offended?”

Think about it. Certain songs like “Dixieland” have now become somewhat radioactive. Not allowed to sing it, or even hum the tune. I wouldn’t sing that at a street protest, for example. Or in certain corporate environments. Corporations like LinkedIn or Google think that censoring speech is the key to creating an inclusive environment (it isn’t, you need a lot more than that) but it’s hyper-conscious in some respects.

A lot of recent revisionist history is worth reading, or watching, IMO. Can’t say if I agree with this person or that one unless I do the work, so I keep at it. Ultimately I have to base my actions on what I believe is right.

On a street or personal level, I have at times made small mistakes that blew up in my face. In my part of the world (Oakland, CA) microaggressions are treated as a real and serious thing, and ignorance is not an acceptable excuse. We’ve also seen what happens when people get flustered, they act out it very foolish ways, and how easily communications can go awry if people do not have strong rapport or commonality. I can’t afford to ignore it, for the sake of my own personal safety and getting along with my neighbors.

One reason I posed this question on SDMB is that people are more skeptical but also more insightful and thoughtful. The question was not whether The Immigrant Song was racist. It was whether it was racist to enjoy it, to like it. So it was kind of a wallowing white-guilt type of question. I appreciate the feedback.

I started reading up on the Vikings a little more, too, since I know very little about them. Big debate whether they were cuddly or not-cuddly. (Probably not-cuddly, but they weren’t alone in that.) Just ask “Were Vikings peaceful” and see what comes up.

Just to throw another wrench into this picture: The inhabitants or Scandinavia and assorted (parts of and whole) islands in the late first millennium were the Norse. The word Viking ranged somewhat in meaning, but “someone who goes off pillaging” was a core meaning (or as a verb “to go off pillaging the weak continentals, or the weaklings in the next fjord over”), and “Inhabitant of Scandinavia” wasn’t.

I was listening to this favorite song after a long break of not hearing it or thinking much about it …and wondered “If I played this song for fun in front of this or that group of people, would they be offended?”

I’d argue that if they WERE offended, that says more about them, than about you (or anyone else) for enjoying it.

The song doesn’t have anything against any certain race and it’s not really advocating any one particular race either. If someone’s deciding it’s racist, not “woke” or anything like that, they’re probably putting a lot more words in Robert Plant’s mouth and intent/import to the song than their ever was.

What would be the racist element of the song exactly? That it’s about white people who were aggressive a thousand years ago? That it’s not sufficiently diverse (if a song can even be so)?