Is Sarah Palin turning into the white Al Sharpton?

The folks quoted in this article seem to think so: 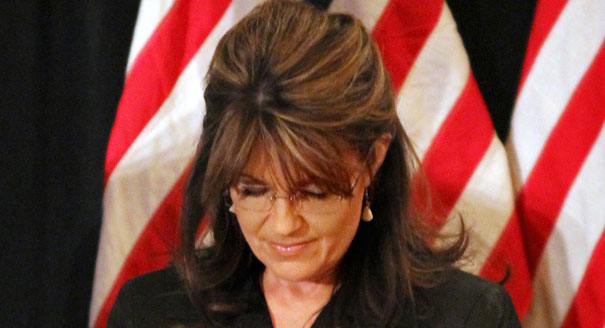 Her brand of politics has its costs.

For now, however, Palin’s appeal is largely rooted in the sympathy she’s gleaned from her loudly voiced resentments toward the left, the news media and the GOP establishment.

“The appeal of conservatism is supposed to be people taking responsibility for their own actions,” said Matt Labash, a longtime writer for the Weekly Standard. “But if you close your eyes and listen to Palin and her most irate supporters constantly squawk or bellyache or tweet about how unfair a ride she gets from evil mustache-twirling elites and RINO saboteurs, she sounds like a professional victimologist, the flip side of any lefty grievance group leader. She’s becoming Al Sharpton, Alaska edition. The only difference being, she wears naughty-librarian glasses instead of a James Brown ‘do.”

Fame whore who regularly plays the victim card, doesn’t handle criticism well, plays loose with the facts and refuses to fess up to her mistakes. I can see the similarities.

Works for me. I hope she has enough rope and marginalizes herself right out of the picture.

Al Sharpton has the guts to appear on serious news shows, face critical questions and speak without a script.

They’re both disingenuous clowns who make millions riling up the ignorant. Al has managed to force some change every now and then so he’s better at it.

Don’t insult Sharpton by comparing Palin to him

Rev Al is smarter and a better speaker.

That would be an improvement, wouldn’t it?

Sharpton is not motivated by just money. Palin is.

Sharpton is a good deal more clever at public speaking, and says brutally truthful things more often. Not to dismiss his less helpful side, but, when he’s good, he’s better than she is.

Al Sharpton was once a political clown. In recent years he’s stuck to more moderate issues, but hasn’t been able to shake the image. He’s more intelligent than Palin, speaks better, and is somewhat more honest. The honesty part means nothing because Palin is the bottom of the scale. The only problem I have with his recent behavior is a failure to admt to, and apologize for, his past behavior.

I think the characterization of Al’s supporters is incorrect also. His body of support seems to be local in NYC, with only occasional and temporary support elsewhere when he promotes a particular issue. I think the tone of the article is racist, and plays upon an old image of Al, and seeks to demonize him for the past.

Even though I dislike Palin, she is much more effective at gaining media attention and raising money than Al. But she refuses to face her critics, and still blindly attacks people who fail to agree with her. Al’s attacks have always been directed, based on issues, even when baseless.

I guess all in all, they both have serious problems politically, and in terms of character. But I would find that the only significant similarity.

Sharpton gets outraged about how other black people are being oppressed.

Palin seems to mostly get outraged at the way Sarah Palin is being oppressed.

I don’t want to fuck Sharpton, that is one difference.

Sharpton is quite a good speaker and quite intelligent. Sarah has lots of incoherent blather come out of her mouth.

Whatever his faults, Sharpton is an intelligent and inspirational leader, and I can sympathise with those who feel the comparison with Palin is insulting to him.

But I’m surprised no one has yet mentioned the most astounding difference between these two extremist demagogues. The Democrat, AFAIK, has never been elected to public office; his candidacy for President was widely regarded as joke. The Republican has served as Governor, been the party’s nominee for V.P. and is even talked about as a serious candidate for President!

Of course this tells us much more about the respective parties than it does about Sharpton and Palin.

Where exactly are you setting the bar? Al’s involvement in the Tawana Brawley incident was primarily to grab headlines and make a fool of himself. Palin has matched his ability to do that in far less time.

Tell me about it. There was one point where I was a suspect in that case (although I blame Maddox more than Sharpton for that).

Tawana Brawley was unsavviness, not maliciousness on Al’s part. You can tell he has learned from that experience. Jesse, you cannot say this for. (Oops, there I did it. Linking Al and Jesse together. Must. Stop. Doing. That.)

As has been said, Sharpton is very intelligent person who can converse with you on a wide range of subjects. He does not speak in talking points nor does he have to glance at the palm of his hand when he gives speeches. He was not an embarrassment when he ran for prez, though we all knew he had no chance in hell of winning. And this is key. We all knew he had no chance of winning. Palin almost did, for heaven’s sake!

Palin belongs in a class of her own. A remedial class, except that many people think she belongs in advanced placement because she’s “cute”. Sharpton may be hated by his past escapades and may like to mug for the cameras (which makes him no different than 100% of the politicos out there), but he’s certainly not remedial. And yet that’s what the article is saying he is. Well, I guess I can’t say I’m surprised.

(Another distinction, many white liberals hate Al almost as much as conservatives do. We do not have the same balanced equation for Palin-hatred. And to that, I say “WTF!?”)

This white liberal has a great deal of respect and admiration for Al Sharpton. I don’t think it’s fair to judge him on Tawana any more than Ted Kennedy should be perpetually demonized for Chappaquiddick. If you listen to what he actually says, he is right on 90+% of the time. I think the man honestly cares about the working class no matter what his/her race. He gets to say what a lot of Dems actually think but don’t have the courage to say.

Sarah Palin has none of Sharpton’s virtues. She’s a media whore, pure and simple. Her one interest in life is running for billionaire, and there are enough morons out there who happily munch on the turds falling out of her mouth to make her one. To compare her to Sharpton is an insult and disservice to Sharpton.

I don’t think it’s fair to judge him on Tawana any more than Ted Kennedy should be perpetually demonized for Chappaquiddick.

Ted Kennedy should be perpetually demonized for Chappaquiddick though. Any good that he may have done afterwards doesn’t mean squat when he should have rightly been in prison.

Sarah Palin has none of Sharpton’s virtues.

This. I don’t see that Sarah has any virtues or values beyond being on TV and getting paid. She’s the political version of Kim Kardashian or Paris Hilton.