Is this common? Why? (Related to cremation and paperwork)

My father-in-law died on January 25, 2021. We (my wife, FIL, and I) live in a county in Central Texas. Austin is the nearest major metropolitan area. When my FIL turned seriously ill, he was transferred from his nursing home to a local hospital. The hospital decided they could not meet his needs and transferred him to a hospital in Austin, Travis County, Texas. At that hospital, he passed on due to sepsis (which was why he was there in the first place). Therefore, his death took place in the City of Austin, County of Travis. After his death, his body was transferred to a funeral home back in our town.

Is this common in other jurisdictions?

(The emotional part of this is that, while the paperwork gets sorted, my FIL’s body resides in a funeral home a few blocks from our home. The funeral is long over. The thought of her daddy sitting in a cold box causes my wife some distress. Had he not left this world from Travis County, the cremation would be finished already. What public good is done by causing this delay just for the payment of a fee?)

The entity charging the fee profits.

Granted, that’s probably not a good to the overall public.

Why does Travis County have any sort of say in the cremation?

Add on to that: he didn’t live in Travis County. Travis County doesn’t care how much this bothers his family. It doesn’t care if this process for out-of-towners is meaningless paperwork or antiquated or faulty.

I can see this point of view. Since Travis County does have the responsibility to investigate the death, it is reasonable that they should acknowledge that they have reached a conclusion before any possible evidence is irrevocably destroyed. Burial, however, does not require a similar permit.

I don’t remember there being many hang-ups when my dad died and was cremated. In his case, he was cremated in the same county he died in. I learned about his death from his landlord (he died alone in his home) and confirmed it with the police officers who responded to the call. One of them asked me who his doctor was and told me his body would be taken to XYZ funeral home.

The next day the funeral home called me to confirm receipt of his body and set up an appointment with me to decide what to do with his body. They ballparked about $1k for the cremation. The next day (Monday) his doctor called me and asked some questions about my dad’s health and then told me that he would indicate my dad died of natural causes (apparently this was his responsibility to determine).

At my funeral home appointment I completed an information form, confirmed my dad’s body was indeed his, submitted my payment for the cremation and two copies of the death certificate, and was told to expect everything to be done in four days.

Three days later they called me to say they were ready and I collected his cremains in a plastic container and two copies of his death certificate. One was sent to his life insurance provider who dutifully executed the policy without question or comment. Apart from the emotional significance of it all, there was really no hassle.

I’ve overseen the cremation of four family members (two near Chicago, one in northern California and one in southern California), and I don’t recall any of them involving payment to the county. But of course laws differ from place to place.

Burial, however, does not require a similar permit.

I agree. But … what I said before.

As I remember it from after my father passed away, the big hangup with cremation tends to be that the attending doctor has to sign the death certificate, which can take a few days. It’s generally not the county bureaucracy that’s the holdup.

This held up my father’s cremation a few days. The attending doctor left town before signing the death certificate, and it took a while before his own doctor would sign. I imagine there are some state regulations that no one really wants to treat lightly.

When I lost my parents to covid last year, my Mom was cremated in Kansas even though she lived and died in Oklahoma. My Dad died and was cremated about 100 miles from where he lived. In neither case did I pay any fees that I was aware of. I had pre-purchased cremation policies for them so that might have had something to do with it. At any rate, in both instances, I just called the funeral home and told them of their passing. They died 3 days apart so I got to know the funeral home people pretty well. They handled everything including dealing with life insurance companies for me. I was really expecting it all to be a big hassle but they made things as painless as they possibly could.

This is the bill that I received for my mom’s cremation. Since I had purchased a cremation policy, the only thing that I had to pay out of pocket was the $75 for 5 official death certificates. 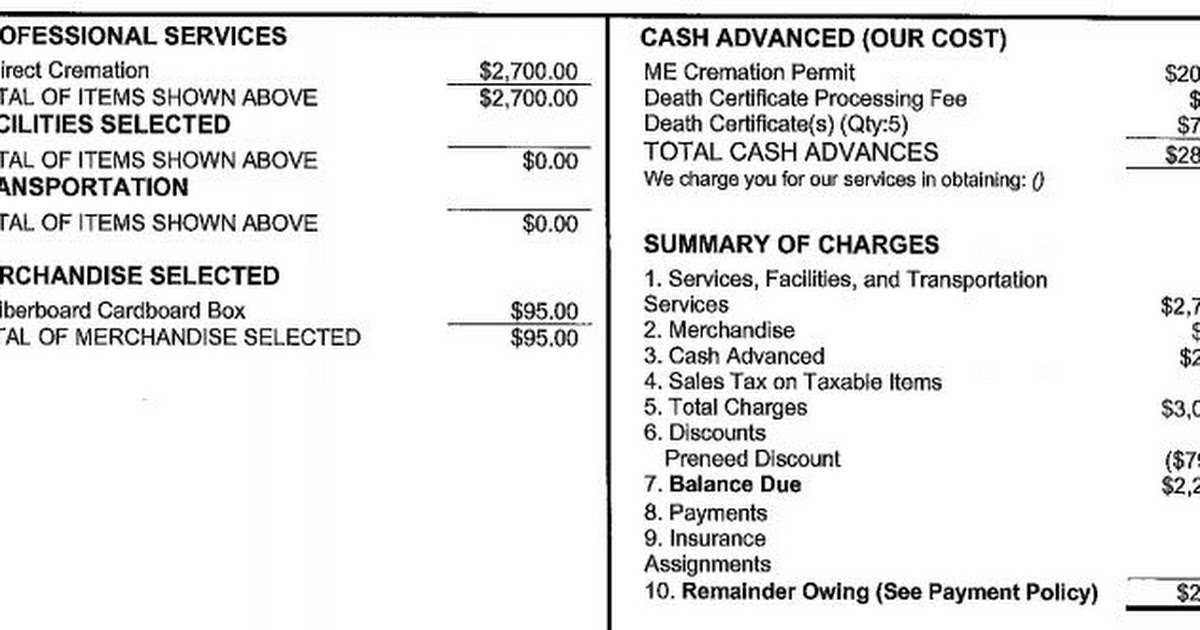 The cremation permit fee from Travis County was only $25, so it hasn’t been a huge burden for us (though I can see how it could be a burden for others). The problem that we have had has just been the emotional upset in the delay. Of course, now, Texas is undergoing an unprecedented extreme weather event, which is increasing stress of everyone. We are fortunate that we have had electricity throughout the crisis, but we have had a pipe burst, so we don’t have water in the house right now.

Our plate is just a bit full right now.