Lance Armstrong cleared. Can they finally leave him alone?

I’ve never seen such a witch hunt against a champion.

He’s pissed in more cups in the past ten years than all the other bicyclists combined. They were testing this guy constantly when he came out of retirement. He’s never failed a urine test.

Now we get this big 2 year Federal investigation that found nothing. Nothing! No dope dealers, no needles, no trips to Mexico for a black bag of steriods. They found Nothing.

Can we finally accept that he’s a gifted athlete that did something extraordinary that will remain in the record books for a long, long time? 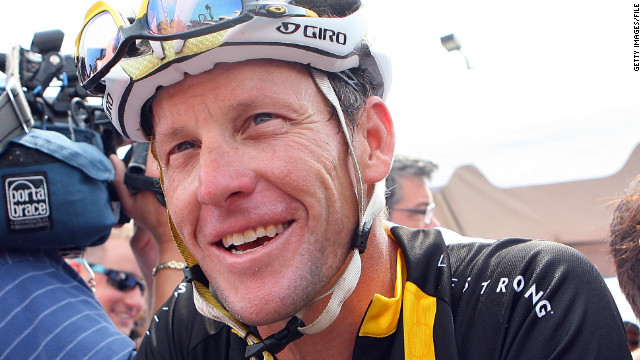 I don’t think you can have a “witch hunt” against a single person.

We should seriously resurrect this thread and see what those who thought he was guilty think now. This was 1 1/2 years ago.

For the record, my post in that thread was:

Do you believe Lance Armstrong, that he didn't dope?

I believe him until evidence is provided to show otherwise.

Unfortunately, no. Due to the large numbers of cheats who were caught after testing clean numerous times, there will never be a finish to this.
Also, how could he be clean and still beat all the dirty riders?

I would like to believe he was clean and as long as he tests clean and doesn’t confess (or get ratted out) on his own, he has to be accepted as clean.

Another point in his favor is that I don’t think anyone else who was caught went this long undetected.

how could he be clean and still beat all the dirty riders?

He already got ratted out, but not by the most believable guys (Landis, Hamilton). In the end there will always be people questioning his victories, for the reasons mentioned above. Many were caught in the period where he dominated the Tour…but these guys also raced for years without being caught. Tour winners Bjarne Riis and Pantani never tested positive, but nobody believes they never doped…Riis even admitted this, years after he retired. Apparantly he was known within the peleton as MR 60%, because he once self tested with this hematocrit level (50% is the official limit, and Riis had 41% naturally). The point is that these guys (and many more) doped, but never got caught.

I don’t like him. They should have just framed him.

It’s not going to stop because of all the dirty racers who spent a crapload of money on dope and still didn’t win. They will not be able to stomach the notion a guy who was actually clean managed to beat them when they were cheating.

Also, how could he be clean and still beat all the dirty riders?

This is my basic contention and why I so despise Greg LaMond. That worm was at the forefront of trying to diminish Armstrong. Yet, he was racing at a time when doping was at its height. Even, if by some miracle, he wasn’t doping his team had to have been. So shut TFU LaMond. He is beneath contempt. Sorry that his fragile ego got busted by a better American rider.

I’m glad this investigation has ended. It’s time to move on.

I’ve always believed that Armstrong was clean, so this is great news.

It’s not going to stop because of all the dirty racers who spent a crapload of money on dope and still didn’t win. They will not be able to stomach the notion a guy who was actually clean managed to beat them when they were cheating.

I think you have nailed it.

Are you medically qualified to make that statement? All of the GC contenders are extreme outliers, and all the others from the Armstrong era were caught or admitted doping. (cite) I don’t see any reason to believe that Armstrong was outlying so far that other extreme outliers on EPO or homologous transfusions would still fall below him in VO2 max, etc.

Y’know, the most irritating thing about this endless Keystone Kops debacle is that in lack of one tiny shred of a whisper of a fragment of hard evidence, we’ve had to hear the same tired arguments over and over and over. Arguments, incidentally, that would make a reasonably bright 10-year-old groan. To wit:

He couldn’t have been that good! So if a breakthrough megastar emerges and blows the doors off of everyone, it automatically means he’s a cheat? Yeah, I’m familiar with this brand of pathetic snivelling, and it has exactly as much credence on YouTube as it does in sports. Is Tiger Woods a complete fraud? Wayne Gretzky? Roger Federer? Michael Phelps? Tony Hawk? John Elway? Hakuho? Hey, Ronnie O’Sullivan got a maximum break in a little over 4 1/2 minutes, he had to be on something!

His opponents were juicing, so he couldn’t possibly have beaten them unless he was as well! So nobody ever overcomes an inherent disadvantage without cheating? Buster Douglas didn’t beat Mike Tyson clean? The battered, demoralized 2004 Red Sox didn’t really pull the comeback of the century against the mighty Yankees? Royce Gracie, he’s gotta be the biggest cheater ever; no way could he have been all those guys that were so much BIGGER than him!

Lots and lots of people say that he doped! Right, right, because as we all know, mob mentality never steers anyone wrong, and especially not when some of the biggest protesters have transparent grudges against Armstrong. Folks, it’s called “hearsay”. Ask any lawyer how much weight this carries.

I really, really, really think he did! I’m 100% sure he did! He must have! I can feel it in my gut! You’re perfectly free to believe that, just as you’re free to believe that the moon is made of cheese (and not tapioca pudding as was previously reported). If you’re trying to convince me that he’s dirty, I’m going to need something a little more solid that. And no, “Still yet that treble-lettered wretch blindly refuses to see the truth, the poor, deluded fool!” doesn’t cut it.

Look, you need to understand something…if you persist in saying that you know he doped, it makes YOU look bad. Because the cycling authorities have been pounding away at this for years now, and they’ve found nothing. The official results stay official. The titles, money, and prestige, Armstrong keeps every last bit of it. The record book will bear no asterisk, no footnote, no hemming and hawing. The fight is over, and you lost. And right now the last thing you need is to keep harping on this. Life goes on. There will be new battles.

Y’know, the most irritating thing about this endless Keystone Kops debacle is that in lack of one tiny shred of a whisper of a fragment of hard evidence, we’ve had to hear the same tired arguments over and over and over. Arguments, incidentally, that would make a reasonably bright 10-year-old groan.

You do realize there is a ton of evidence against him. People are routinely convicted of serious crimes who have less circumstantial and eyewitness testimony against them. I really don’t know or care if he cheated, and I think that even if he did, he still did something amazing. But, let’s no pretend there is no evidence he cheated.

He’s pissed in more cups in the past ten years than all the other bicyclists combined. They were testing this guy constantly when he came out of retirement. He’s never failed a urine test.

Amongst people who follow cycling, your paragraph qualifies as an automatic large neon sign above your head saying “I DON’T HAVE A FRICKIN’ CLUE WHAT I AM TALKING ABOUT!”

The reason LA chants “I never failed a test” over and over is because he knows it sounds good to the vast majority of people who are clueless about this stuff and who don’t realise that there was no test for the doping methods top riders were using back in the day when LA was winning.

Now we get this big 2 year Federal investigation that found nothing. Nothing! No dope dealers, no needles, no trips to Mexico for a black bag of steriods. They found Nothing.

You must have access to some sources I don’t. I haven’t seen anything saying they either “cleared him” or “found nothing”. I guess you’d have to assume they didn’t find enough to think they could prove anything beyond a reasonable doubt. Which means something but not much.

Very good post my ass. It’s a mix of strawmen and misinformation.

First two arguments are pretty the same. No one says he couldn’t have won without doping against doped opponents. It’s just very unlikely. And anecdotes about miraculous sporting achievements are all very stirring, but winning something seven years straight against doped opponents points in a particular direction, probability wise, even if you don’t want to see it.

There is actually plenty of direct testimony against Armstrong. It’s not all hearsay. Saying otherwise is just factually incorrect. Much of the direct evidence is from people who could be regarded as unreliable or biased. I suspect this may be a reason behind the investigation being stopped. That doesn’t mean the testimony is false. The breadth of it suggests the contrary, even if there isn’t the killer evidence needed to take LA on.

And if you think that LA’s victories will in future be regarded as unstained, I think you are kidding yourself. There will be no footnotes against his victories anywhere LA can sue, but there are footnotes, even if not explicitly stated, everywhere else.

I agree with basically all of what you’re saying Princhester, but don’t think people will regard Lance’s victories as asterisked, by and large. There’s a lack of baseline comparison - ie Well we all know Lance was doping, not like X who won the tour clean.

Who is X again? You’ve got Cadel who is probably the best candidate for a clean winner and that’s it. Maybe ever.