Anyone else want to see a picture of this giant lasagne? I mean, how big are we talking here?

The OP said it costs him $50 per lasagna, which, if you’re using quality ingredients, could easily just be a standard 9"x13" baking sheet’s worth, or about 12 servings.

I could easily spend about that much for a tray between the beef, sausage, pancetta, mirepoix, chicken stock, wine, heavy cream, tomato, ricotta mixture as described above, mozzarella, noodles, herbs, and assorted other little bits that go into my recipe.

This is true, but I guess it depends on how complex the OP’s recipe is. I think we need to see it!

(I had to look up Mirepoix, but realise now it’s what I would call sofrito).

(I had to look up Mirepoix, but realise now it’s what I would call sofrito).

Yeah, mirepoix is the classic French term; in Italian cooking you have battuto (when raw) or soffritto (after cooking) for essentially the same concept. (And then sofrito in Spanish and Latin American cooking.)

And, yes, traditional lasagna from Bologna has besciamella, not Mornay sauce – or at least I wouldn’t call it technically a Mornay. The besciamella may be sprinkled with parmesan after it’s cooked and layered on the lasagna sheets, but a Mornay has the cheese melted into it as the sauce itself is cooking. To me, that’s a difference.

Parmesan would then be the second derivative of milk?

If that’s true, then what would be the integral of milk?

I’m half Italian (Calabrese/Sicilian). My Italian grandma rarely made lasagna (spaghetti & meatballs were her thing) but when she did she used cottage cheese. It could have been because maybe ricotta wasn’t readily available here when the family arrived in the US. I had never heard of ricotta cheese until maybe the 90’s! I made lasagna with ricotta once but found it too dry. I use small curd 4% fat cottage cheese and mix in egg, shredded mozz and parm.

BTW I would never eat cottage cheese by itself - UGH.

I now want to know more about employing marmite in making lasagna. English marmite or NZ? I have both in my kitchen. I also have cenovis and vegemite I could use. Please advise, and if you have a newsletter, let me sign up.

the Marmite suggestion was mostly a joke as I was trying to think of something controversial to use as a third ingredient to experiment with.

But actually I could imagine using marmite to magnify the ‘beefy’ taste of the bolognaise sauce. But not for the cheesy layer.

Kudos for knowing Cenovis though. I didn’t think anyone outside of Switzerland had ever heard of it.

I’ll go out on a limb here, and suggest that “marmite” in this context refers to the pot (pan, actually) in which the lasagne is cooked?

NOW what you really need to do use cans of Spaghetti-Os instead of pasta sauce in the Lasagna similar to this: 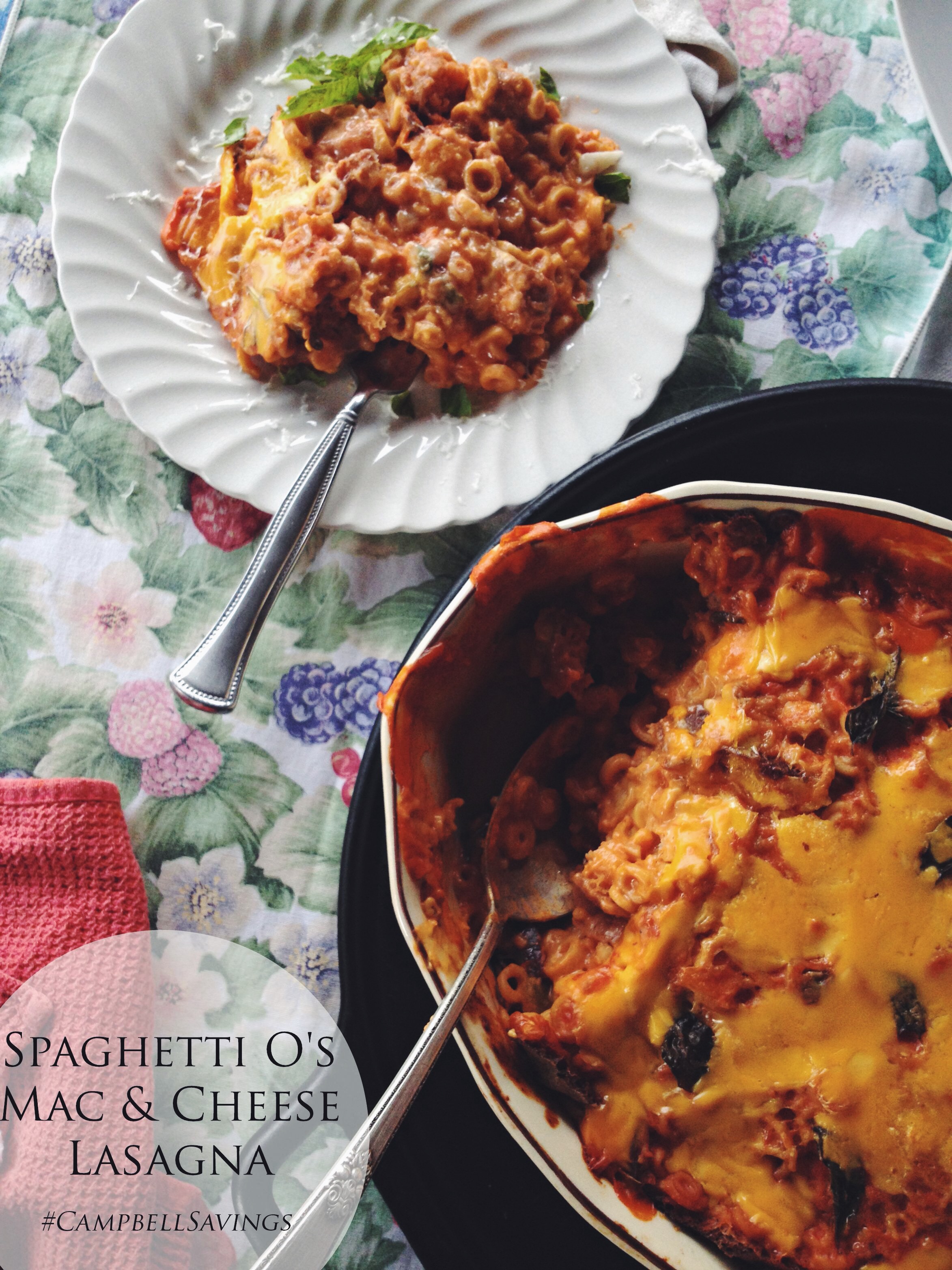 This shop has been compensated by Collective Bias, Inc. and its advertiser. All opinions are mine alone. #CampbellSavings #CollectiveBias We are reinventing SpaghettiOs® in this easy and quick mac and cheese dish, by kicking it up with PACE® salsa,...

Yeah, mirepoix is the classic French term; in Italian cooking you have battuto (when raw) or soffritto (after cooking) for essentially the same concept. (And then sofrito in Spanish and Latin American cooking.)

Thanks for the spelling correction, I certainly meant the italian not the spanish (which I think may usually have red peppers in it).

@Orville_mogul Cenovis is actually my fave yeast spread, followed by the english marmite. My daughter elfbabe gifts it to me every couple of years, she has connections overseas who manage to provide me with a few jars of it.

I tend to use vegemite in my standard bolognese sauce anyway, which I use in my lasagne. But I’m always up for alternate recipes

the Marmite suggestion was mostly a joke as I was trying to think of something controversial to use as a third ingredient to experiment with.

But actually I could imagine using marmite to magnify the ‘beefy’ taste of the bolognaise sauce. But not for the cheesy layer.

Marmite is a very acceptable ingredient to add umami in many meaty sauces. No issue with that at all.

My mom always used cottage and her lasagna is better than most of the italian restaurants I’ve eaten at.

The one thing it can’t beat? ITSELF! (after you reheat it on the 2nd day)

Had a friend that always blended ricotta and small curd cottage cheese - he preferred the resulting texture. I have to admit it came out pretty decent. I tend to stick to straight ricotta myself, with or without egg + herbs.

I’ve ranted enough before about my distaste for bechamel.

I called my mom, who was from Italy and made the best lasagna in the universe. She said some non-Italians used cottage cheese, so maybe that’d work.

Like my Scandinavian-American mom, her lasagna consisted of sauce with cottage cheese and cooked ground beef mixed in layered between the noodles. No separate layer just for cheese.

It was even better as cold leftovers.

I have never heard or seen ricotta in a curd form. It’s just a thick white blob of tastiness out of the container. I’m another that mixes ricotta and cottage cheese with some added ingredients. The last step is to thin the mixture down to the consistency I need using whole milk. I would like my lasagna to cost only $50. I use better quality meats and grind them myself. There is no less than 12 kinds of cheese. I entered one of my super deluxe versions in a cooking contest, it featured leading chefs and students from a culinary school. The sauce contained beef, pork and buffalo along with a generous amount of rye whiskey. My home made noodles were regular white, a butternut squash, and spinach based. 12 kinds of cheese were used including $30 a pound mozzarella from Italy. Total cost was about $200. 10 of the 12 judges voted mine #1. Some contestants complained after they found out that I did not work in the food industry. To make them happy, I did not accept the cash prize but kept the $3000 worth of cooking supplies. Still have most of that stuff and the big blue ribbon that hangs on the wall of my kitchen.