Looking for earbuds with a specific feature set

My last earbuds were this model: 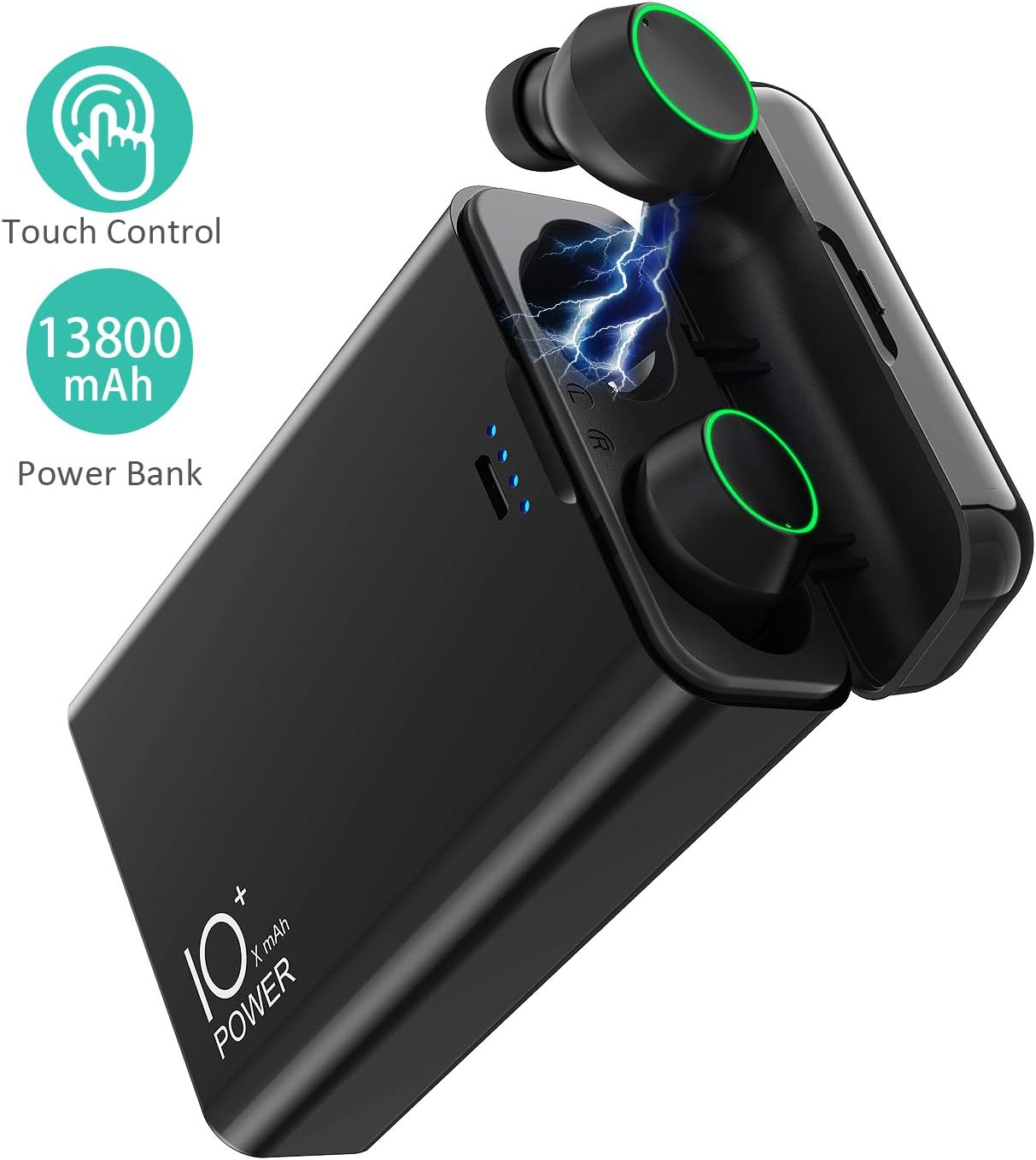 That one met most of my requirements but their lag/latency was rather high; it wasn’t possible for me to watch video content while using them.

Their claim of having a waterproof rating of IPX7 was not true, or at least it was no longer true after the first time I dropped them and one of them split open. I was never able to re-seat the cover well enough to be sure it was still waterproof, if it ever really was to begin with.

So I’m looking for a new set of waterproof bluetooth wireless earbuds (no connecting wire between them) with low lag/latency that comes with a charging case that doubles as a power bank with at least 10 Ah capacity. I’d like them to be able to keep working even after repeated dunks in water, so I think that means IPX7 or better.

I need to keep at least some ambient hearing while they’re in use. so I don’t need or want any noise cancellation features. If it does happen to have that, need to be able to disable it, and I don’t want to pay extra for a feature I don’t want/need. Once I disable it I don’t want to have to keep turning it off every time I wear them.

It would be nice if they were rugged enough to survive being dropped from head height at least a few times before breaking.

I’m finding it very hard to search for this combination of features, no matter how I set up the search I keep getting tons of hits of models with charging cases that are not also power banks.

getting tons of hits of models with charging cases that are not also power banks.

Yeah, I think that’s going to be tough to find. I’ve never seen anything like that for any “name brand” earbuds. So anything you find matching will probably be off questionable quality.

I also wouldn’t worry too much about amp hours, as different buds use more or less battery. It makes more sense to consider how many hours of charge they have, both from the case and in the earbuds as well.

As for lag and latency, look for at least Bluetooth 5.0. And make sure the problem isn’t the device that plays the video, as it should be able to compensate for any lag.

I also wouldn’t worry too much about amp hours, as different buds use more or less battery.

I want that much amp-hour capacity so it can recharge my phone multiple times. Of course that has a side effect of having plenty left over for many earbud charge-ups too.

As for lag and latency, look for at least Bluetooth 5.0. And make sure the problem isn’t the device that plays the video, as it should be able to compensate for any lag.

The buds I’m replacing (supposedly) had 5.0; the listing says so right there in that link preview, but its audio latency was significant. I’ve only ever seen one player, VLC, that had a manual adjustment for audio latency. When I first noticed the issue I was having with youtube videos and those headphones, I searched for a solution then. I found nobody claiming the problem was with my phone; All the advice boiled down to “get better bluetooth headphones.”

I’ve been using these for over a year now, and they’re still going strong: 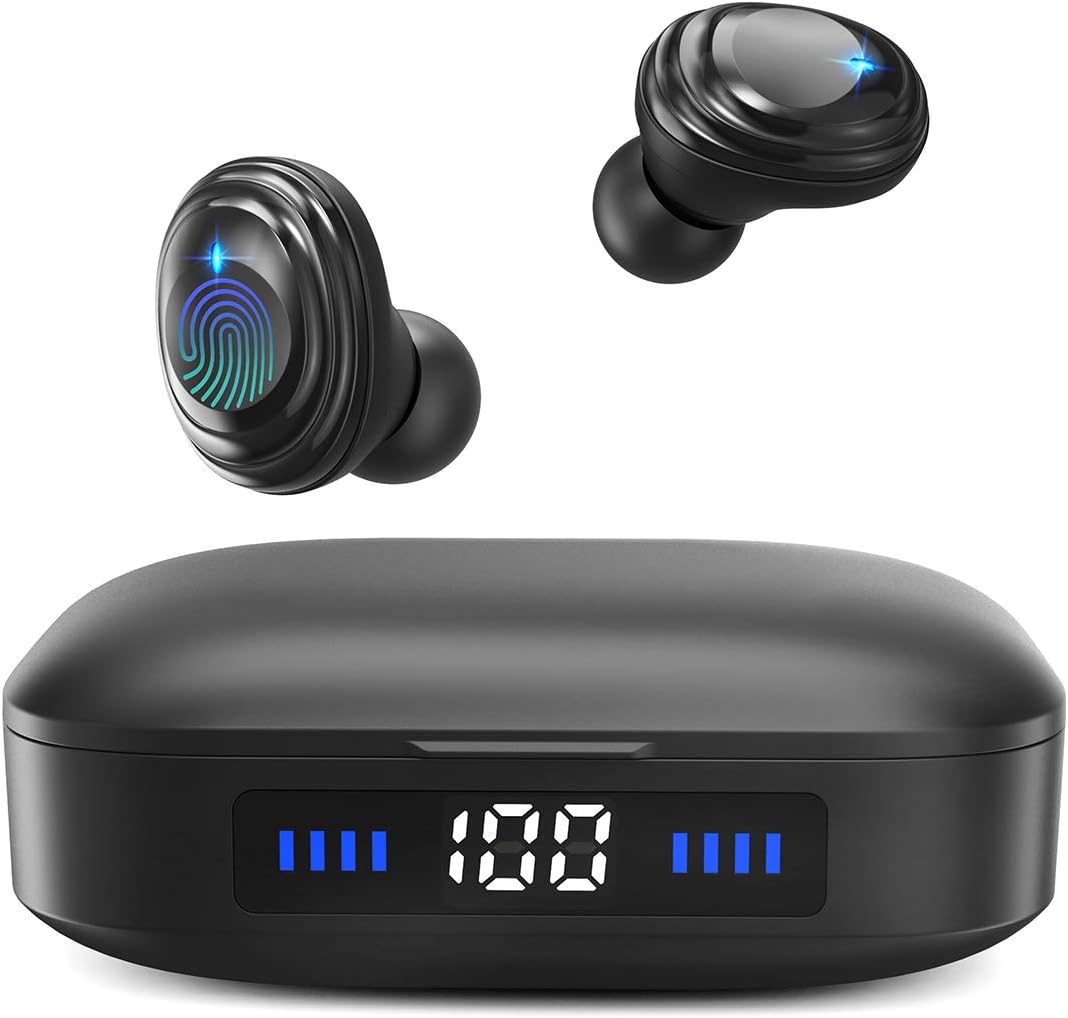 They claim to be IPx7, but I’ve never tested their water resistance beyond heavy sweating.

I use them almost exclusively for listening to podcasts, so if you care about music I won’t vouch for sound quality. Also, I’ve had issues when using them for phone calls that the mic pics up any ambient noise and is distracting for the other person on the call.

I also have used them for video without any lag problems.

I have cracked the case from repeated droppings from only lap height, so the case is not super-rugged. I can’t say I’ve dropped the earbuds themselves from any height onto a hard surface, but I would be surprised if they broke from that. They seem quite sturdy, though it might depend on exactly how they land and on what surface.

Not enough battery for you though.

All that to say, these are $25 earbuds and they don’t have the latency problem.

I want that much amp-hour capacity so it can recharge my phone multiple times. Of course that has a side effect of having plenty left over for many earbud charge-ups too.

I think the problem is looking for an all-in-one solution is you’re only going to find something that isn’t good at either. When not just get quality earbuds AND get a powerbank.

When not just get quality earbuds AND get a powerbank.

That adds one more bulky thing to carry around in my pockets when I’m out and about. I really liked having both things combined together so that’s what I’m looking to find again.

I am very happy with my Jabra Elite 75t sport earbuds. They also make a waterproof version claimed IP67. (What, do you swim in these or something?) I don’t recommend dropping them but I have had one fall out of my ear a couple of times on the road while cycling to no ill effect.

They have a “hear through” feature which activates the microphones and feeds ambient sounds into your ears. This is a one-click feature that is off when you first power them on.

I think they are about $110 right now on Amazon.

I have never experienced any lag at all in any earbuds I’ve used and I’ve gone through a few. I wonder if that issue is in your mobile device and not the earbuds.

I had those and just returned them. They sound great when I was sitting down, but if I was walking, every step created a boom, like I’m trampling Tokyo. Apparently, this can be a problem for some people with those ear canal ear buds.

Does that just not happen for you? Or, do you get used to it?

Not that this is on topic for this thread in any way, of course.

I have noticed in general that inserting any kind of insulating earbuds heightens my sensitivity to my internal sounds, even footsteps. I noticed it quite a bit the very first time I used any. But now in actual use, I don’t notice it anymore, especially when I’m playing something through them.

Ah. Maybe I should have given them more time. Oh well.