Massachusetts has major pain in the gas.

So a natural gas company near Boston has upgraded their lines to include a “blow up your house” feature, causing several dozen fires and causing three towns to be evacuated.

The message is=if you are in the three towns and have gas, get out. Power company is cutting the juice to the three affected towns.

The first glance indicates there was a pressurization problem. Considering that the housing stock in the area has a lot of century old houses, restarting the gas will take some time. The century old leaking pipes in the street won’t help either.

More information about the situation, but still no explanation of what exactly went wrong: 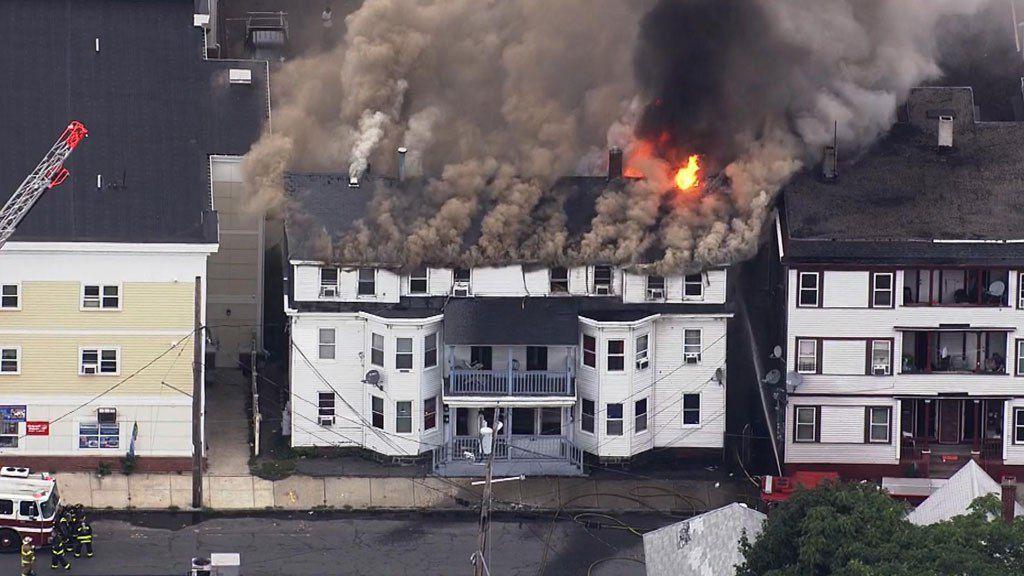 Isn’t this how season 1 of Preacher ended? If you start hearing a choir version of “No Rain” run.

I’m seriously confused how this is even possible. You would hope there were safety features that would prevent the boom from spreading.

It happened in Missouri when a worker damaged a regulator, which led to high pressure gas going into household lines.

It also happened in Fairport Harbor, Ohio a few years ago.

There are 70-100 houses on fire. They’re having extra trouble putting them all out because the water pressure is terrible due to the 70-100 fires being put out. I guess some major pipes had been very recently replaced, so I don’t know if they were done correctly. There are some local union troubles with the electric company, not sure if there’s a carry over to the gas company too.

Some local hotels are letting people in. People are opening up homes. Churches are being used as shelters. The interstate exits are supposedly close to traffic, but they’re letting people evacuate.

At the same time, a manhole went ka-bloomy in Cambridge by the Museum of Science.

The cities of Andover and North Andover, which are fairly prosperous, and Lawrence, which is not, are being evacuated, and I heard that First Responders are blocking exit ramps and other roads into those cities.

These three cities have a total population of about 150,000. I hope they can at least figure out what caused this and that they aren’t invaded by looters; in the meantime, electricity has also been cut to the affected areas to reduce the chances of errant sparks setting off more fires.

One death reported–an 18-year-old sitting in his car hit by the chimney of an exploding house.

And the San Bruno pipeline explosion which was due to incompetence and greed of PG&E.
I used to go to the old Western Electric plant in North Andover all the time. Lovely town, so sorry to hear about this disaster.

And the San Bruno pipeline explosion which was due to incompetence and greed of PG&E.
I used to go to the old Western Electric plant in North Andover all the time. Lovely town, so sorry to hear about this disaster.

I forgot about that one. Some people in the neighborhood thought a plane had crashed.

It also happened in Fairport Harbor, Ohio a few years ago.

Every gas meter has a regulator. It’s designed to handle small changes in gas pressure.

I’m not sure how it reacts to a large change.

The size of the pipe coming from the street will also limit the volume of gas entering the home.

I hope this wasn’t a deliberate act.

It happened in Bergenfield New Jersey, killing three and wounding five. I was one town over, and heard the blast.

Never having had natural gas (or even theoretical access to a line for the majority of my life) it never even occured to me that there was a screw-up that the provider could make that could destroy multiple customer’s homes via remote control.

I live next to Andover - the gas co. has now released a list of streets in each city/town with a problem - about 8,000 building total, so not the entirety of each town.

My girlfriend lives in Andover, and I was at her house last night. The news & info was very chaotic. Especially with her teenage daughters in separate group chats reporting what they heard from their friends - if half of what the teenagers were reporting was true, half the state would be an inferno by now. She did wind up turning off her own gas & spending the night at my place.

It sounds like one feeder pipe got overpressurized, leading to gas leaks in a lot of houses. If you were lucky, the gas ignited almost immediately, and you were home, so you could report it & have it put it out. If you weren’t lucky, the gas spread through the house before igniting, causing an explosion, or you weren’t home when a fire started, and your house burned to the ground.

The clean up effort is expected to take weeks. Not just the burnt up houses, but fixing the leak (which they found via cool helicopter scanners), turning everything back on, etc.

I guess the gas company is being exceptionally unhelpful and the fixing part has been turned over to another company.

This really would have been a much bigger national story if it weren’t for both the hurricane and all the Trump crap. It’s an important learning piece for emergency responders. Also, the hurricane is a significant story but it hadn’t even hit land last night. There wasn’t a whole lot to report other than “rain, high winds, big waves. Back to you, anchorperson.” I mean, not for locals who need details, but on a national level there wasn’t much to say quite yet.

Never having had natural gas (or even theoretical access to a line for the majority of my life) it never even occured to me that there was a screw-up that the provider could make that could destroy multiple customer’s homes via remote control.

Yeah… it’s fortunate that a lot of homes in the northeast have oil or propane instead, which isn’t connected permanently to a pipeline. Houses that have propane do blow up too, but only one at a time.

While I feel bad for folks from all three towns, I feel the worst for those in Lawrence. As nearwildheaven hints at it’s one of the poorest cities in the state. And I lived there until the age of ten, so.

It does not surprise me in the least that hotels and churches opened themselves up to the displaced - it is a city that is good at coming together in times of crisis. When I was very small there was rioting and the churches provided sanctuary then as well. I was only seven at the time, but I recall everyone in my neighborhood going to gather at a local church (I was too young at the time to wonder why my Catholic best friends’ family was coming to church with us instead of going to St. Patrick’s per usual) and singing hymns and impromptu “Sunday” school lessons for us. Everyone was very calm, and none of us little ones really understood why we were getting together on a Wednesday night in August. Really, the only traumatic part I remember was Eric crying because they sent him to a different classroom than his brother Georgie and me because he was younger than us.

Anyway, I’m hopeful that the gas company has to pay through the nose for harming so many people.