Second explosion might have been when fire fighters inadvertently hit a bunch of calcium carbide with water from their fire hoses.

I understand that produces acetylene.

BBC is saying that the warehouse where the explosion occurred

Article also says there were two explosions, the second being equivalent to 21 tons of TNT, with a blast radius of 2 km.

Way Back When, I toured an Explosion Proof warehouse that was extending their line of credit (along with a few VPs). Its spark proof super-safe construction & other safety restrictions were Massive (and Expensive) but for Damned Good Reason.

It was explained to us quite thoroughly why the “You need a Warehouse? We gotta warehouse” model is Totally Unacceptable for the flammable and explosive goods industry.

Well, it’s not as if America, Britain, France and even smaller countries such as Belgium haven’t had vast explosions and fires in peacetime through industrial accident.

Back in 1947, a ship loaded with ammonium nitrate exploded in Texas City. More ships and oil storage tanks blew up and/or burned. Over 500 people died.

CNN has been saying more explosions have occurred. Dreadful.

I’m not buying the “21 tons of TNT” figure. A large aerial bomb (a large normal one, not a bunker buster) has half a ton of explosive and would typically destroy one good-sized building. There’s no way this was only as powerful as 42 bombs, especially considering that blast radius with scale with the cube root of the yield, so a 21-ton explosion would only have 3.5 times the blast radius of a Mark 84 bomb.

Edit: BTW, there are reports of more explosions today.

Maybe, just maybe, this tragedy will cause the first cracks in the CCPs stranglehold on power. Pure speculation on my part but I’m guessing that this incident was only possible because of rampant corruption.

Under Chinese regulations, warehouses stocking dangerous materials must be at least 1,000m away from surrounding public buildings and main roads, but there were at least two residential compounds and several main roads within that distance. It seems the 21 firemen who died didn’t know about the chemicals stored there, nor did any of the local residents.

From the Times today.

Government officials, acutely aware of concerns over the fire, have sought to suppress unauthorized information. They seemed unprepared for the tough questions posed at a news conference in Tianjin on Friday, including why hazardous chemicals had been stockpiled so near populated areas. They abruptly ended the conference.

Another resident reacted angrily to published reports describing a study by the Tianjin Academy of Environmental Sciences that endorsed Rui Hai’s plans to expand its business into handling hazardous chemicals. The report, produced last year, claimed that a survey of local residents had found unanimous support for the project. “That’s nonsense,” the resident said from the hospital where he was being treated for a broken arm. “If we had known, who would have dared to live there?”

The fix was obviously in. Corruption, not following regulations, not requiring companies to document what stuff they store (or not enforcing the documentation) etc., etc. I’m sure the management of this company will be made an example of while the same thing happens elsewhere.

Back in 1947, a ship loaded with ammonium nitrate exploded in Texas City. More ships and oil storage tanks blew up and/or burned. Over 500 people died.

CNN has been saying more explosions have occurred. Dreadful.

What capitalism? Sounds like the same old CCP stuff that they did before. There is a long history of this kind of crap in China and it has nothing to do with capitalism.

Well, it’s not as if America, Britain, France and even smaller countries such as Belgium haven’t had vast explosions and fires in peacetime through industrial accident.

They aren’t generally covered up as the Chinese have attempted to do…and, usually, they aren’t as devastating or spectacular, at least not these days. Also, citizens affected by these sorts of fuckups in the US, Britain, France and Belgium, as well as most western nations, are compensated for damages, which I’m not sure is going to happen with most of the Chinese citizens. In addition, when something bad like this happens, there is generally an outcry and reforms and new regulations are put in place to prevent this in the future. In China, what usually happens is someone is made an example of (meaning they are either in for the long drop/bullet to the head, or they are given suspended death sentences if they are lucky…and depending on which CCP faction they are in or associated with, and whether someone thinks they can be ‘rehabilitated’ down the road), but nothing will really change (well…until the situation is so out of control and the people are so on the verge of rebellion over it that the party HAS to do something, in which case it will be something really big, over the top and probably something that won’t work).

Video talking about the death penalty in China…I figure we’ll see something like this for those evil ‘capitalists’ who were responsible for putting this thing closer to residential buildings than their regulations allowed. Of course, the folks who REALLY were responsible for this were the party officials…probably the local ones who approved it in the first place…but there is not much chance they will be in for the long drop, unless of course the national party wants to make an example of them (or if people are REALLY pissed off over this, which I suspect they are going to be since, as I said, this isn’t an isolated incident, but part of a whole slew of such fuckups at nearly every level and on a host of different things). 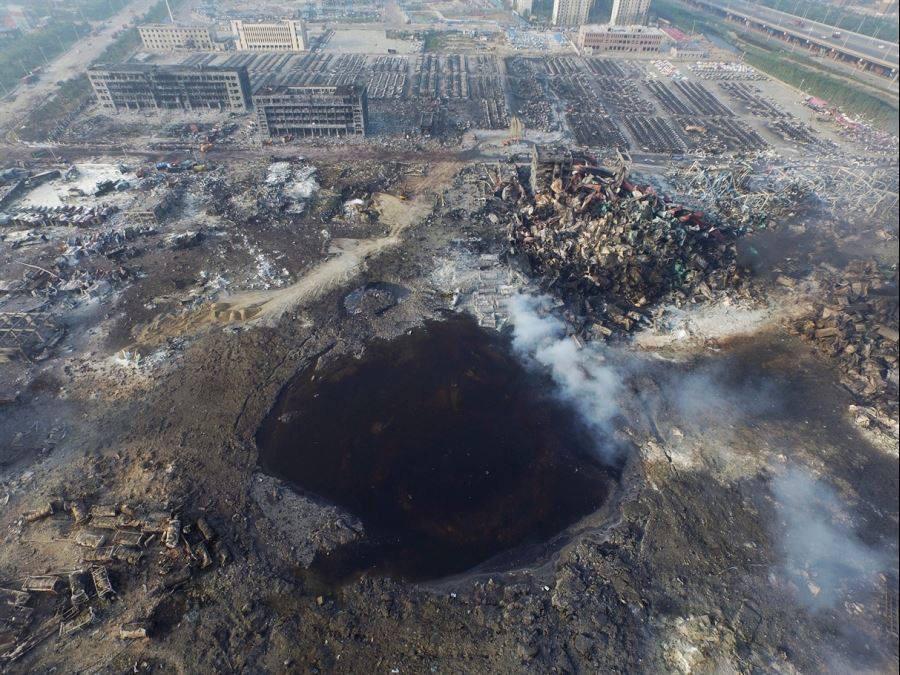 Why does it seem so deep? Was there a basement or underground storage tanks? I would have though most of the blast energy would go outward & upward.

Why does it seem so deep? Was there a basement or underground storage tanks? I would have though most of the blast energy would go outward & upward.

I think it may be an optical illusion; it seems to me to be a depression filled with dark water, that gives the impression of a deeper hole than it really is.
Still, damn indeed.

Of course, the folks who REALLY were responsible for this were the party officials…probably the local ones who approved it in the first place…

Another report in the state-run Science Daily newspaper said there were at least 700 tons of sodium cyanide at the site, far in excess of the 10 tons it was licensed to handle.

http://www.nytimes.com/2015/08/16/world/asia/china-tianjin-blasts-chemical-containment.html?_r=0
So it was approved for a very small amount, but the massive damage happened because 70 times as much was stored as was permitted.